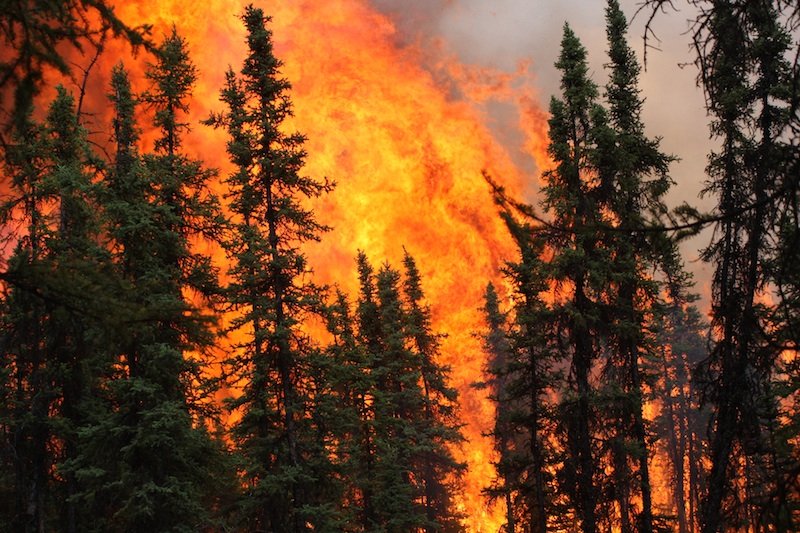 This summer, Alaska has experienced record high temperatures and devastating wildfires. If such events become more frequent, how might that impact our northernmost forests? A team of researchers led by the Department of Energy’s Lawrence Berkeley National Laboratory (Berkeley Lab) projected that the combination of climate change and increased wildfires will cause the iconic evergreen conifer trees of Alaska to get pushed out in favor of broadleaf deciduous trees, which shed their leaves seasonally.

Using a well-tested ecosystem model called ecosys, they predicted that by the year 2100 the relative dominance of evergreen conifer trees (black spruce) will decline by 25% and non-woody herbaceous plants such as moss and lichen will decline by 66%, while broadleaf deciduous trees (aspen) will become dominant, nearly doubling in prevalence. With such large declines, this shift in vegetation will highly likely have reverberations for the entire ecosystem and climate.

“Expansion of the deciduous broadleaf forests in a warmer climate may result in several ecological and climatic feedbacks that affect the carbon cycle of northern ecosystems,” said Zelalem Mekonnen, a Berkeley Lab postdoctoral fellow who was first author of the study.

The paper, “Expansion of High-Latitude Deciduous Forests Driven by Interactions Between Climate Warming and Fire,” was published today in Nature Plants. The study was funded as part of DOE’s Office of Science through the Next-Generation Ecosystem Experiment – Arcticproject and included co-authors from UC Irvine, the University of Alberta, and Woods Hole Research Center. NGEE-Arctic seeks to gain a predictive understanding of the Arctic terrestrial ecosystem’s feedback to climate and is a collaboration among scientists at Oak Ridge National Laboratory, Berkeley Lab, Los Alamos National Laboratory, Brookhaven National Laboratory, and the University of Alaska Fairbanks.

“We predict the forest system will remain a net sink for carbon, meaning it will absorb more carbon than it emits,” said co-author William J. Riley, a senior scientist in Berkeley Lab’s Earth & Environmental Sciences Area. “But will it be more or less of a sink? Our next study will quantify the carbon and surface energy budgets. This study focused more on how vegetation types are expected to change.”

Changes in forest cover type will affect many important ecosystem processes. For example, an increase in deciduous broadleaf trees, which lose their leaves every year, unlike evergreens, could result in more rapid microbial decomposition and increased transpiration (the loss of moisture through leaves); both of these processes introduce amplifying feedbacks to climate warming. On the other hand, higher surface reflectance may have a cooling effect when more snow is exposed because of fewer evergreen trees; what’s more, deciduous trees are less flammable than evergreen trees. The researchers predicted modest effects on net carbon budgets and will analyze that further in future work.

Riley added that the study included many steps to confirm that the results from ecosys were valid. “We evaluated model performance against many current observations of forest cover and carbon cycling measurements, and against long-term changes under natural climate variation,” he said.

Climate change is hitting the northern latitudes especially hard due to the phenomenon of Arctic amplification, a positive feedback that causes temperatures to rise faster than the global average. While average global temperatures are projected to rise about 4 degrees Celsius by 2100 in a “business as usual” scenario, some recent studies are predicting much larger increases for the Arctic.

The extent to which fires will increase is even more uncertain. So the researchers modeled four scenarios, from a zero increase in burn area up to a 150% increase by 2100. The scenarios were taken from published studies that accounted for factors such as warmer temperatures and increases in lightning strikes.

What is known about fires are the impacts they have on the forest ecosystem. “Fires deepen the active layer, which is the zone of soil that remains unfrozen,” said Riley. “That leads to an increase in soil nutrients available for plants. Increases in soil nutrients favor deciduous plants, which is one reason why we predict they will do so well under a warming climate. Higher deciduous tree cover has happened under previous climates; paleoecological studies of the last 10,000 years suggest that Alaskan forests have undergone similar shifts in dominant tree species.”

Another factor that favors broadleaf deciduous over evergreen conifer trees is that their leaves decompose more rapidly, leading to more rapid carbon turnover, which determines the available nutrients in the ecosystem.

“As you get more rapid turnover, you get more deciduous plants,” Riley said. “It’s a self-reinforcing mechanism.”

Although previous studies have examined how climate change will impact boreal forests, Riley said this was the first to consider the complex interactions among plants, soil, and nutrients – both above and below ground – and how they evolve over time.

“This study is a more detailed and mechanistic explanation of these processes,” he said.

Other factors that favor broadleaf deciduous trees in a future warmer climate are their greater ability for post-fire seedling regeneration and their ability to grow fast and thus compete for light. “Plants have different strategies to survive under different environmental conditions,” Mekonnen said.

The study found that both climate change and increased fire were required to produce broadleaf deciduous trees’ dominance. Across the fire scenarios tested where fires increased, that shift was projected to occur around the year 2058. If warming occurred without increased fire or vice versa, the model found that evergreen conifers remained the dominant Alaskan tree type through the 21st century.

Another forest component that will be affected is wildlife.

What’s more, the modeling technique can be used to study how climate change and fire will affect other geographic areas. “Our modeling approach is applicable to other northern regions because the fundamental mechanisms that control these dynamics are similar everywhere,” Mekonnen said.