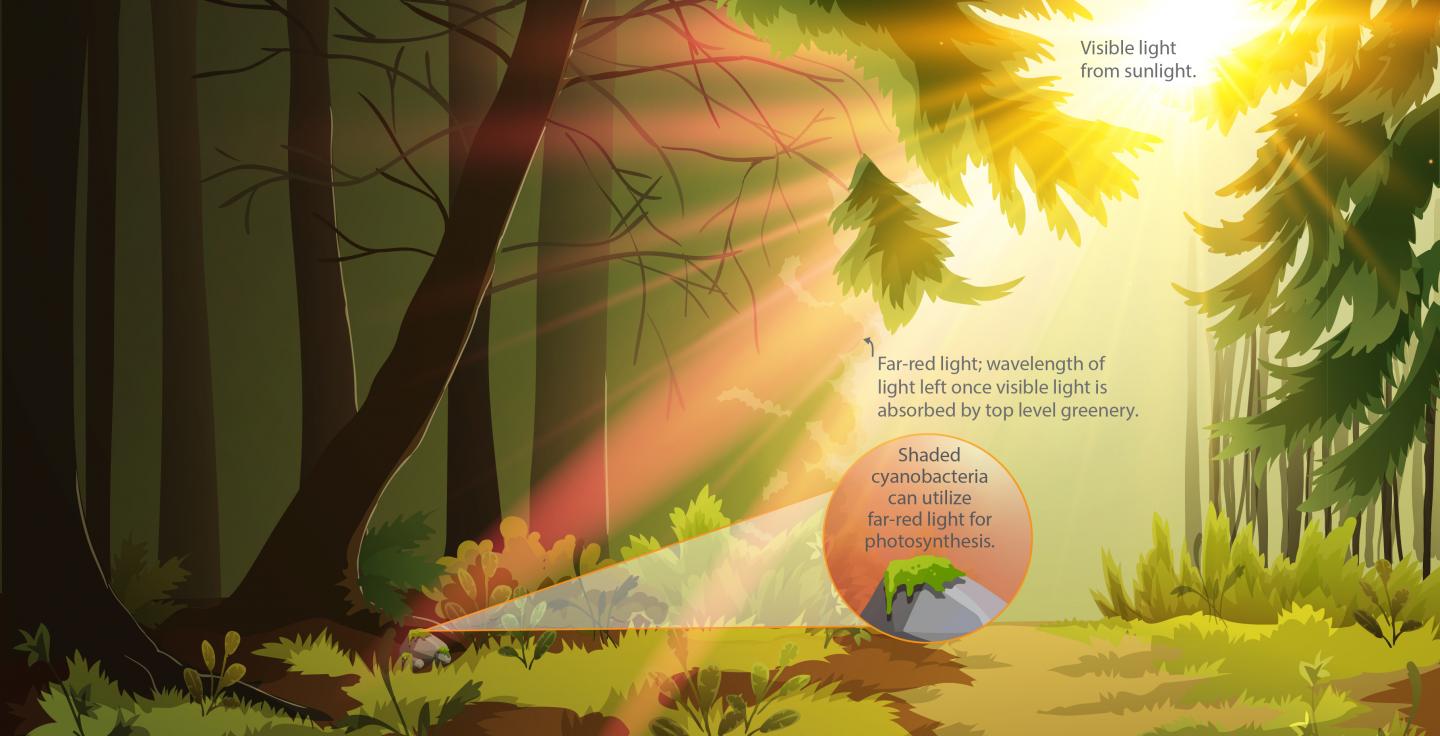 Scientists have determined the structure of the protein complex that gives cyanobacteria their unique ability to convert weak, filtered sunlight into useable energy. Their findings could one day be used to engineer crops that thrive under low-light conditions.

Tiny photosynthetic organisms that live virtually everywhere on earth, cyanobacteria helped to create an oxygen-rich atmosphere on earth and continue to provide us with much of the oxygen that we need to survive.

“When cyanobacteria live in low-light conditions, such as beneath a pond surface or under the leaf litter on a forest floor, some are able to switch from using the visible light that is most conducive to their growth and photosynthetic activities to harvesting the weaker, far-red sunlight that filters down to them,” said Donald Bryant, Ernest C. Pollard Professor of Biotechnology, Penn State. “This novel ability gives cyanobacteria an adaptive advantage over other organisms and is part of why they are responsible for 50 percent of all photosynthetic activity on the planet.”

In its study, the team, which included researchers at Arizona State University’s Biodesign Center for Applied Structural Discovery, investigated Fischerella thermalis, a terrestrial cyanobacterium previously used as a model organism for the study of photosynthesis. Like all species of cyanobacteria, F. thermalis is rich in chlorophyll, the pigment that is responsible for absorbing light. According to Bryant, recent research has suggested that F. thermalis‘s usual complement of chlorophyll, called chlorophyll a, is partially replaced under far-red light conditions with a closely related, yet chemically distinct, form of the molecule, known as chlorophyll f.

“So far we have only been able to speculate about how cyanobacteria make the switch to using chlorophyll f because no structural information about the photosynthetic machinery involved has been available for us to see what is going on,” he said.

To understand the phenomenon, Bryant and his colleagues used cryogenic electron microscopy (Cryo-EM) to solve the structure of F. thermalis‘s photosystem I, one of the two protein complexes responsible for photosynthesis that occur in all photosynthetic organisms. Cryo-EM can determine biomolecular structures with near-atomic scale resolution. Using the method, the researchers were able to observe the locations of chlorophyll f molecules present in F. thermalis. Specifically, the team identified four sites where these chlorophyll f molecules can bind and become functional.

“By synthesizing and incorporating around 8% chlorophyll f into their photosystem I complexes, F. thermalis is able to carry out photosynthesis using far-red light of up to nearly 800 nanometers,” said Chris Gisriel, a postdoctoral associate at Yale University who participated in this research while he was a researcher at Arizona State University’s Biodesign Center for Applied Structural Discovery.

Bryant said that in previous research, he and his colleagues discovered that another protein in the cyanobacterial cells senses the wavelength of incoming light and activates the production of the modified photosynthetic apparatus when far-red light is predominant over visible light.

Gisriel added, “Research suggests that perhaps 25 percent of all cyanobacteria, including common soil organisms, have this capability. This would imply that a significant portion – about one-eighth – of the oxygen on earth comes from organisms with this adaptation.”

The team’s findings suggest exciting possibilities for future applications. For example, crops could potentially be tweaked to control their light absorption properties depending on ambient light conditions. In addition, two crops could potentially be grown together, with shorter crops like alfalfa, extracting far-red light from their shaded locations beneath taller crops, like corn. Such a strategy could produce twice the crop yield per unit area.