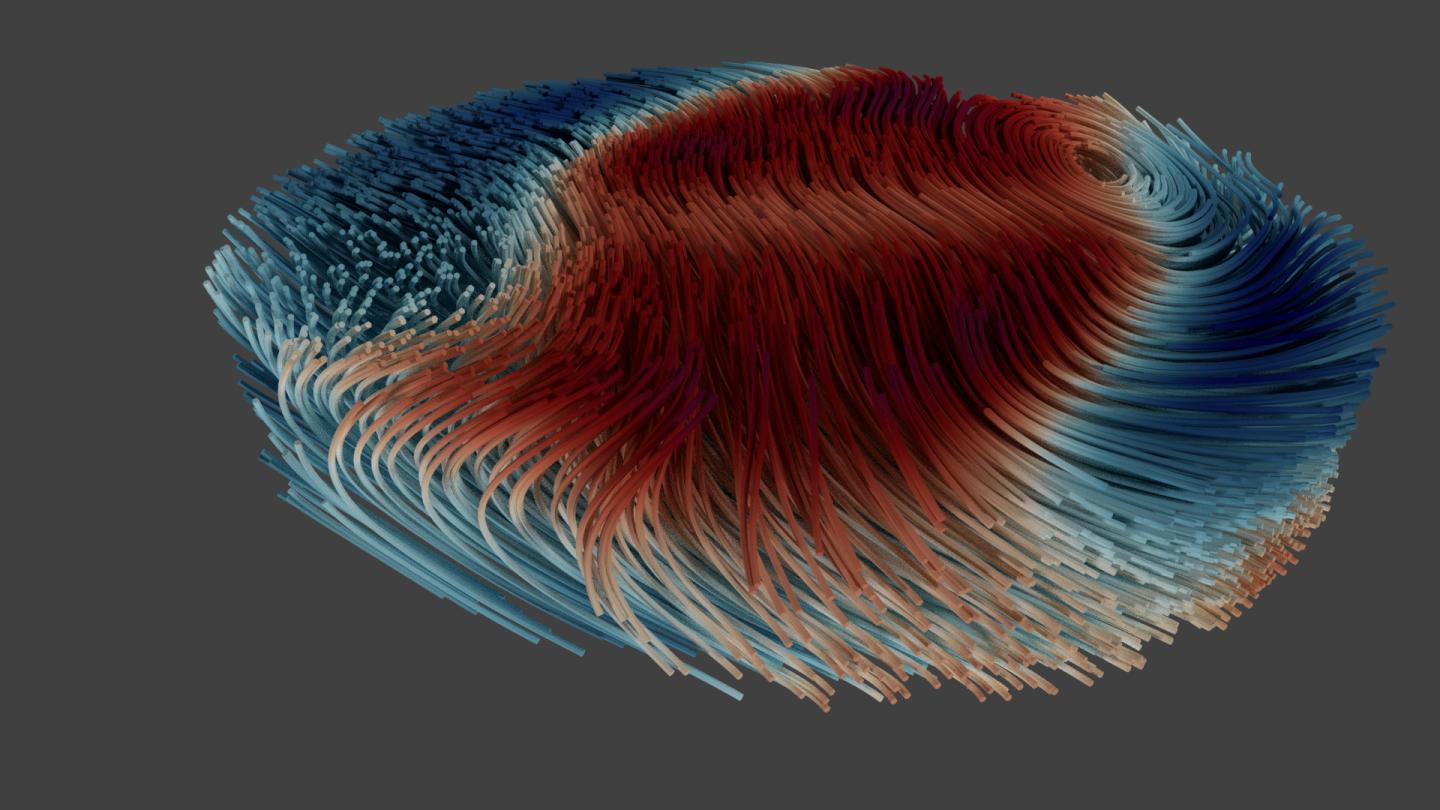 The team, from the Universities of Cambridge and Glasgow in the UK and ETH Zurich and the Paul Scherrer Institute in Switzerland, used their technique to observe how the magnetisation behaves, the first time this has been done in three dimensions. The technique, called time-resolved magnetic laminography, could be used to understand and control the behaviour of new types of magnets for next-generation data storage and processing. The results are reported in the journal Nature Nanotechnology.

Magnets are widely used in applications from data storage to energy production and sensors. In order to understand why magnets behave the way they do, it is important to understand the structure of their magnetisation, and how that structure reacts to changing currents or magnetic fields.

“Until now, it hasn’t been possible to actually measure how magnets respond to changing magnetic fields in three dimensions,” said Dr Claire Donnelly from Cambridge’s Cavendish Laboratory, and the study’s first author. “We’ve only really been able to observe these behaviours in thin films, which are essentially two dimensional, and which therefore don’t give us a complete picture.”

Moving from two dimensions to three is highly complex, however. Modelling and visualising magnetic behaviour is relatively straightforward in two dimensions, but in three dimensions, the magnetisation can point in any direction and form patterns, which is what makes magnets so powerful.

“Not only is it important to know what patterns and structures this magnetisation forms, but it’s essential to understand how it reacts to external stimuli,” said Donnelly. “These responses are interesting from a fundamental point of view, but they are crucial when it comes to magnetic devices used in technology and applications.”

One of the main challenges in investigating these responses is tied to the very reason magnetic materials are so relevant for so many applications: changes in the magnetisation typically are extremely small, and happen extremely fast. Magnetic configurations – so-called domain structures – exhibit features on the order of tens to hundreds of nanometres, thousands of times smaller than the width of a human hair, and typically react to magnetic fields and currents in billionths of a second.

Now, Donnelly and her collaborators from the Paul Scherrer Institute, the University of Glasgow and ETH Zurich have developed a technique to look inside a magnet, visualise its nanostructure, and how it responds to a changing magnetic field in three dimensions, and at the size and timescales required.

The technique they developed, time-resolved magnetic laminography, uses powerful X-rays called synchrotron X-rays to probe the magnetic state from different directions at the nanoscale, and how it changes in response to a quickly alternating magnetic field. The resulting seven-dimensional dataset (three dimensions for the position, three for the direction and one for the time) is then obtained using a specially developed reconstruction algorithm, providing a map of the magnetisation dynamics with 70 picosecond temporal resolution, and 50 nanometre spatial resolution.

What the researchers saw with their technique was like a nanoscale storm: patterns of waves and tornadoes moving side to side as the magnetic field changed. The movement of these tornadoes, or vortices, had previously only been observed in two dimensions.

“We can now investigate the dynamics of new types of systems that could open up new applications we haven’t even thought of,” said Donnelly. “This new tool will help us to understand, and control, their behaviour.”