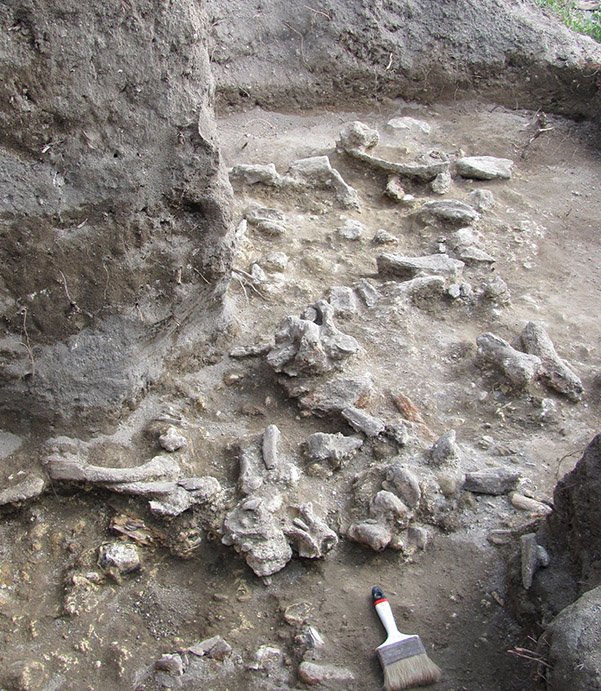 Homo erectus, one of modern humans’ direct ancestors, was a wandering bunch. After the species dispersed from Africa about two million years ago, it colonized the ancient world, which included Asia and possibly Europe.

But about 400,000 years ago, Homo erectus essentially vanished. The lone exception was a spot called Ngandong, on the Indonesian island of Java. But scientists were unable to agree on a precise time period for the site – until now.

In a new study published in the journal Nature, an international team of researchers led by the University of Iowa; Macquarie University; and the Institute of Technology Bandung, Indonesia, dates the last existence of Homo erectus at Ngandong between 108,000 and 117,000 years ago.

The researchers time-stamped the site by dating animal fossils from the same bonebed where 12 Homo erectus skull caps and two tibia had been found, and then dated the surrounding land forms – mostly terraces below and above Ngandong – to establish an accurate record for the primeval humans’ possible last stand on Earth.

“This site is the last known appearance of Homo erectus found anywhere in the world,” says Russell Ciochon, professor in the Department of Anthropology at Iowa and co-corresponding author on the study. “We can’t say we dated the extinction, but we dated the last occurrence of it. We have no evidence Homo erectus lived later than that anywhere else.”

The research team presents 52 new age estimates for the Ngandong evidence. They include animal fossil fragments and sediment from the rediscovered fossil bed where the original Homo erectus remains were found by Dutch surveyors in the 1930s, and a sequence of dates for the river terraces below and above the fossil site.

In addition, the researchers determined when mountains south of Ngandong first rose by dating stalagmites from caves in the Southern Mountains. This allowed them to determine when the Solo River began coursing through the Ngandong site, and the river terrace sequence was created.

“You have this incredible array of dates that are all consistent,” Ciochon says. “This has to be the right range. That’s why it’s such a nice, tight paper. The dating is very consistent.”

“The issues with the dating of Ngandong could only ever be resolved by an appreciation of the wider landscape,” says Kira Westaway, associate professor at Macquarie University and a joint-lead author on the paper. “Fossils are the byproducts of complex landscape processes. We were able to nail the age of the site because we constrained the fossils within the river deposit, the river terrace, the sequence of terraces, and the volcanically active landscape.”

Previous research by Ciochon and others shows Homo erectus hopscotched its way across the Indonesian archipelago, and arrived on the island of Java about 1.6 million years ago. The timing was good: The area around Ngandong was mostly grassland, the same environment that cradled the species in Africa. Plants and animals were abundant. While the species continued to venture to other islands, Java, it appears, likely remained home – or least a way station – to some bands of the species.

However, around 130,000 years ago, the environment at Ngandong changed, and so did Homo erectus‘s fortunes.

“There was a change in climate,” Ciochon explains. “We know the fauna changed from open country, grassland, to a tropical rainforest (extending southward from today’s Malaysia). Those were not the plants and animals that Homo erectus was used to, and the species just could not adapt.”

Ciochon co-led a 12-member, international team that dug at Ngandong in 2008 and in 2010, accompanied by Yan Rizal and Yahdi Zaim, the lead researchers from the Institute of Technology, Bandung, on the excavation. Using notes from the Dutch surveyors’ excavation in the 1930s, the team found the original Homo erectus bone bed at Ngandong and re-exposed it, collecting and dating 867 animal fossil fragments. Meanwhile, Westaway’s team had been dating the surrounding landscapes, such as the terraces, during that time.

“It was coincidental” the teams were working in the same place – one group at the fossil bed, the other group dating the surrounding area, Ciochon says.

“With the data we had, we couldn’t really date the Ngandong fossils,” Ciochon continues. “We had dates on them, but they were minimum ages. So, we couldn’t really say how old, although we knew we were in the ballpark. By working with Kira, who had vast amount of dating data for the terraces, mountains, and other landscape features, we were able to provide precise regional chronological and geomorphic contexts for the Ngandong site.”