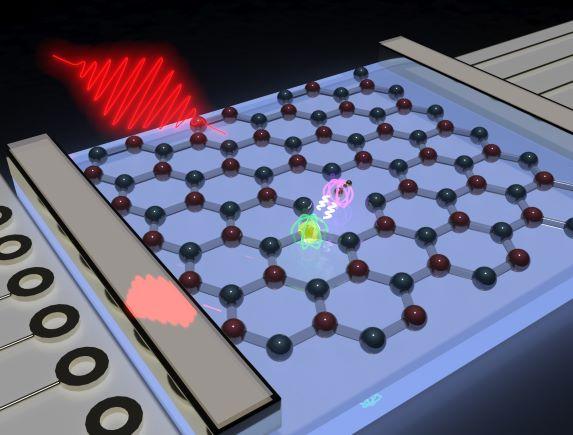 A team of international scientists investigating how to control the spin of atom-like impurities in 2D materials have observed the dependence of the atom’s energy on an external magnetic field for the first time.

The results of the study, published in Nature Materials, will be of interest to both academic and industry research groups working on the development of future quantum applications, the researchers say.

Scientists from the University of Technology Sydney (UTS), the University of Würzburg, the Kazan Federal University and the Universidade Federal de Minas Gerais, demonstrated the ability to control the spin of atom-like impurities in 2D material hexagonal boron-nitride. By combining laser and microwave excitation the researchers were able to change the spin states, for example “up” to “down”, of atom-like impurities hosted in the material and show the dependence of their energy on an external magnetic field.

This is the first time that the phenomenon has been observed in a material that is made of a single sheet of atoms like graphene. The researchers say that this newly demonstrated quantum spin-optical properties, combined with the ease of integrating with other 2D materials and devices, establishes hexagonal boron-nitride as an intriguing candidate for advanced quantum technology hardware.

“2D atomic crystals are currently some of the most studied materials in condensed matter physics and materials science,” says UTS physicist Dr Mehran Kianinia, a co-author of the study. Their physics is intriguing from a fundamental point of view, but beyond that, we can think of stacking different 2D crystals to create completely new materials, heterostructures and devices with specific designer properties.”

UTS researcher, Dr Carlo Bradac, a senior co-author of the study says that in addition to adding another unique property, to an already impressive range of properties for a 2D material, the discovery has enormous potential for the field of quantum sensing.

“What really excites me is the potential [in the context of quantum sensing]. These spins are sensitive to their immediate surroundings. Unlike 3D solids, where the atom-like system can be as far as a few nanometres from the object to sense, here the controllable spin is right at the surface. Our hope is to use these individual spins as tiny sensors and map, with unprecedented spatial resolution, variations in temperature, as well as magnetic and electric fields onto variations in spin” Dr Bradac says.

“Imagine, for instance, being able to measure minuscule magnetic fields with sensors as small as single atoms. The possibilities are far reaching and range from nuclear magnetic resonance spectroscopy for nanoscale medical diagnostic and material chemistry to GPS-free navigation using the Earth’s magnetic field,” he says.

However quantum-based nanoscale magnetometry is “just one area where controlling single spins in solids is useful” says senior author of the study UTS Professor Igor Aharonovich.

“Beyond quantum sensing, many quantum computing and quantum communication applications rely on our ability to control the spin-state – zero, one and anything in between – of single atom-like systems in solid host materials. This allows us to encode, store and transfer information in the form of quantum bits or qubits,” he says.