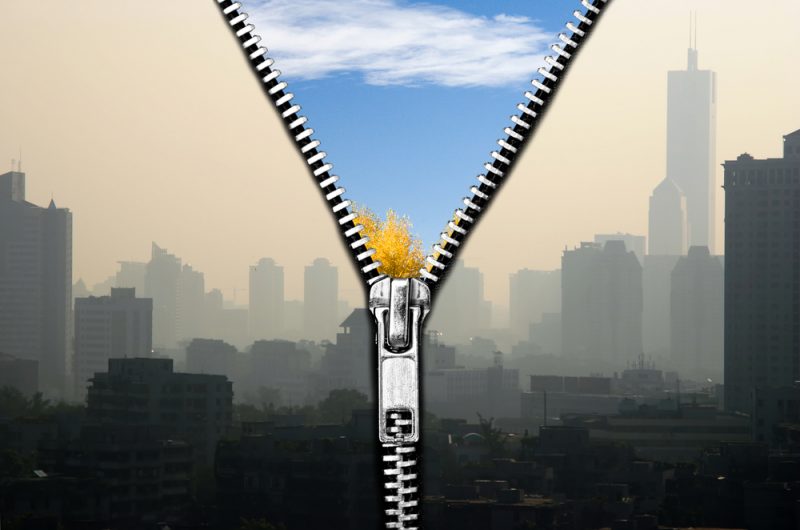 Air-quality alerts often include the levels of particulate matter, small clumps of molecules in the lower atmosphere that can range in size from microscopic to visible. These particles can contribute to haze, clouds, and fog and also can pose a health risk, especially those at the smaller end of the spectrum. Particles known as PM10 and PM2.5, referring to clumps that are 2.5 to 10 micrometers in size, can be inhaled, potentially harming the heart and lungs.

This week, a group led by University of Pennsylvania scientists in collaboration with an international team report a new factor that affects particle formation in the atmosphere. Their analysis, published in the Proceedings of the National Academy of Sciences, found that alcohols such as methanol can reduce particle formation by consuming one of the process’s key ingredients, sulfur trioxide (SO3).

“Right now, we’re all concerned about PM2.5 and PM10 because these have some real air-quality and health consequences,” says Joseph S. Francisco, a corresponding author on the paper and an atmospheric chemist in Penn’s School of Arts and Sciences. “The question has been, How do you suppress the formation of these kinds of particles? This work actually gives some very important insight, for the first time, into how you can suppress particle growth.”

“We and others have been studying this process of how particles grow so we can better understand the weather and the health implications,” says Jie Zhong, a postdoctoral fellow at Penn and co-lead author of the work. “Previously people thought that alcohols were not important because they interact weakly with other molecules. But alcohols attracted our attention because they’re abundant in the atmosphere, and we found they do in fact play a significant role in reducing particle formation.”

Leading up to this work, Zhong and colleagues had been focused on various reactions involving SO3, which can arise from various types of pollution, such as burning fossil fuels. When combined with water molecules, SO3 forms sulfuric acid, a major component of acid rain but also one of the most important “seeds” for growing particles in the atmosphere.

Chemists knew that alcohols are not very “sticky,” forming only weak interactions with SO3, and had thus dismissed it as a key contributor to particle formation. But when Zhong and colleagues took a closer look, using powerful computational chemistry models and molecular dynamics simulations, they realized that SO3 could indeed react with alcohols such as methanol when there is a lot of it in the atmosphere. The resulting product, methyl hydrogen sulfate (MHS), is sticky enough to participate in the particle-formation process.

“Because this reaction converts alcohols to more sticky compounds,” says Zhong, “initially we thought it would promote the particle formation process. But it doesn’t. That’s the most interesting part. Alcohols consume or compete for SO3 so less of it is available to form sulfuric acid.”

Even though the reaction between methanol and SO3 requires more energy, the researchers found that MHS itself, in addition to sulfuric acid and water, could catalyze the methanol reaction.

“That was an interesting part for us, to find that the MHS can catalyze its own formation,” says Francisco. “And what was also unique about this work and what caught us by surprise was the impact of the effect.”

Francisco and Zhong note that in dry and polluted conditions, when alcohols and SO3 are abundant in the atmosphere but water molecules are less available, this reaction may play an especially significant role in driving down the rate of particle formation. Yet they also acknowledge that MHS, the production of the methanol-SO3 reaction, has also been linked to negative health impacts.

“It’s a balance,” says Zhong. “On the one hand this reaction reduces new particle formation, but on the other hand it produces another product that is not very healthy.”

What the new insight into particle formation does offer, however, is information that can power more accurate models for air pollution and even weather and climate, the researchers say.

“These models haven’t been very accurate, and now we know they were not incorporating this mechanism that wasn’t recognized previously,” Zhong says.

As a next step, the researchers are investigating how colder conditions, involving snow and ice, affect new particle formation. “That’s very appropriate because winter is coming.” Francisco says.