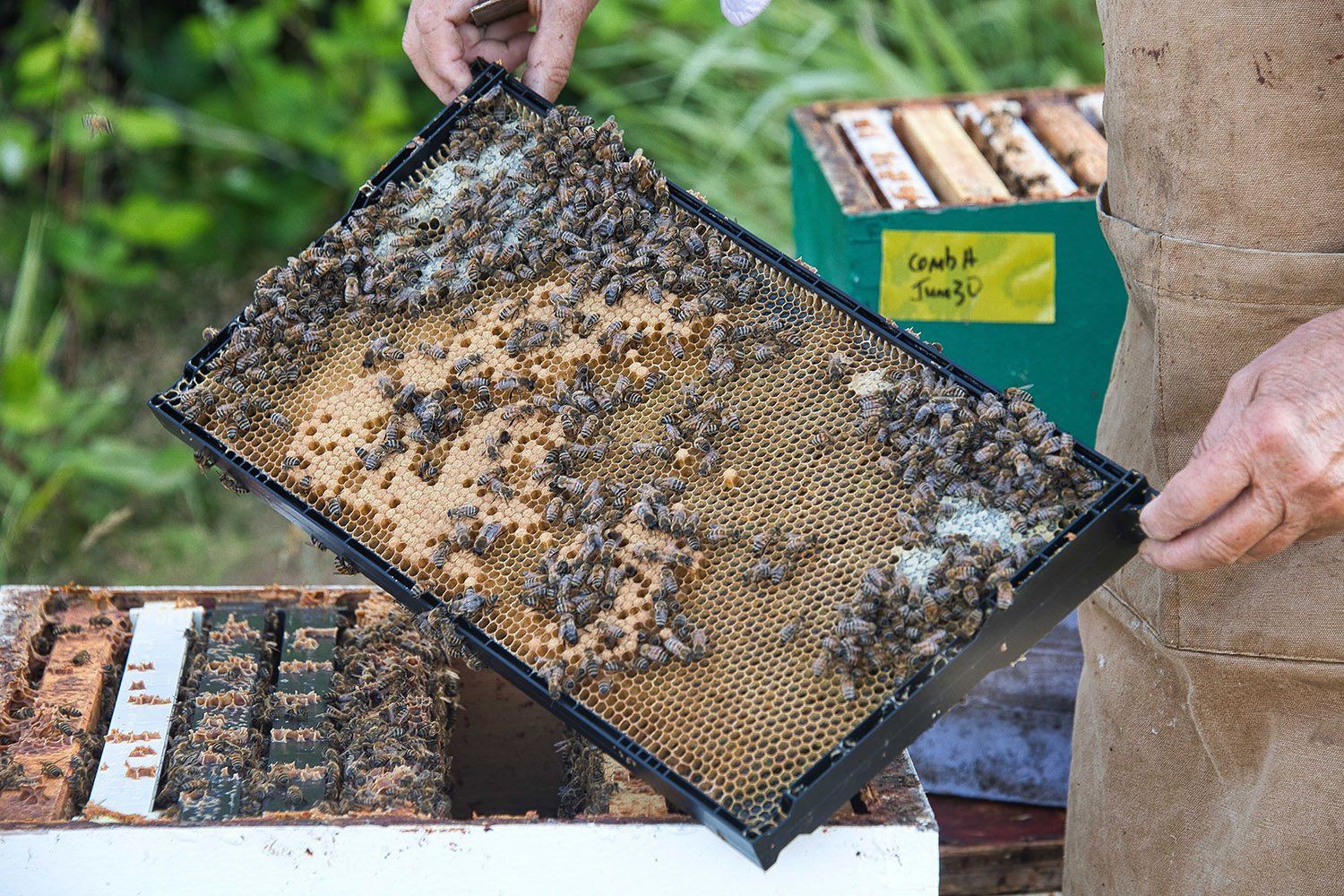 Scientists have combined analyses from honey and salmon to show how lead from natural and industrial sources gets distributed throughout the environment. By analysing the relative presence of differing lead isotopes in honey and Pacific salmon, Vancouver-based scientists have been able to trace the sources of lead (and other metals) throughout the region. Scientists in France, Belgium and Italy are now looking to apply the same approach to measure pollutants in honey in major European cities. The research is being presented at the Goldschmidt conference in Barcelona.

Scientists have long known that honey bees pick up small amounts of metal elements (i.e., iron, zinc, and pollutants such as lead, and cadmium) when they alight on flowers and leaves. They carry these metals back to the hive where tiny amounts are incorporated into the honey. However, this is the first time researchers have been able to establish clearly the sources of the metals carried by the bees and their products, making them reliable biomarkers for environmental pollution.

“We’ve found that we can let the bees do the hard the work for us: they go to thousands of sites where metal-containing dust particulates might land, then bring samples back to a central hive. From there we can take the honey to have it analysed and begin to identify the source of pollutants like lead” said Ph.D. candidate Kate Smith, part of a team working at the Pacific Centre for Isotopic and Geochemical Research (University of British Columbia).

Once they have sampled the honey gathered by the bees, it is taken to a specialised geochemistry lab to be analysed using a high-resolution ICP-MS (Inductively coupled plasma mass spectrometry) instrument. This allows scientists to distinguish between different types (isotopes) of certain metal pollutants, like lead.

Smith continued, “Looking at the lead isotopic composition of the honey samples, we can tell the difference between honey gathered in the city centre of Vancouver and honey gathered in rural areas. We see that the trace amounts of lead in urban honey samples contain higher 208Pb/206Pb ratios that have no local natural equivalent, indicating that they come from man-made sources like aging city infrastructure and fuel combustion (e.g. cars and ships). Lead ratios measured in rural honey, on the other hand, reflect those of natural sources, like the local geology or particulates from nearby forest fires.”

Presenting the work on salmon, postdoctoral researcher Dr. Miling Li added “This work with honeybees is mirrored in initial findings from shellfish and salmon. Juvenile salmon breed and live in remote freshwater ecosystems in British Columbia, and their lead composition reflects that found in nature, e.g. the nearby Garibaldi volcano range. Adult salmon that forage in the open ocean off the BC coast reveal isotopic compositions consistent with downtown Vancouver honeys. This indicates that Pacific salmons were exposed to lead during their sea life mostly from anthropogenic sources in the Northeast Pacific Ocean.”

Although we can identify the sources of lead, the lead concentrations in both the honey and salmon from Vancouver and the surrounding areas are extremely low and well below the reported world-wide average of lead in honey.

Following the proof of concept work in Metro Vancouver (and similar work in Australia, in Sydney and the site of the vast Broken Hill lead mines, the main source of lead added to gasoline in Europe, Asia and many other places in the world), the UBC team has now developed standardised protocols for measurement of lead isotopes in honey to apply the technique to other cities. Experiments are now being set up in Paris, Brussels, and Piacenza, with interest also coming from the U.S. Simultaneously, the UBC team is confirming the efficacy of the Vancouver honey data by monitoring topsoil and air quality near the hives.

Kate Smith said, “Honey is particularly useful because honeybees can be found pretty well everywhere, so we believe that using honey as a proxy measurement for lead pollution may become an important urban geochemistry and environmental tool. This means we need to make sure that we have a framework that gives results of consistent quality from year to year and city to city. This is what we are now testing.”

Research team leader Professor Dominique Weis said “Urban geochemistry has become an important discipline in understanding the spread of heavy metal pollutants in cities, as long as the natural background is well characterized. Lead isotopic analysis is a standard geochemical method that for decades provided a signal dominated by lead that was used as an additive in gasoline. Honey is an effective biomonitor, and allows us to identify the source of some pollutants even at very low levels; we think that this method could become an internationally accepted way of assessing metal sources and distribution in urban environments”.

Airborne lead pollution varies significantly from area to area. It is found naturally at low levels. Major sources of pollution are metal processing, incinerators, and other industrial processes. Lead in gasoline was banned in the 1990s in North America, which caused a significant decrease in airborne lead levels (98% in the USA). Depending on the level of exposure, lead can have significant health effects.

“This research is emblematic of contemporary science because it touches on two emerging key public interests in an increasingly urbanised world: it examines environmental quality by way of assessing anthropogenic changes to trace element sources in the wider environment and it engages citizens directly through the collection and sharing of honey for geochemical analysis. Nothing could be sweeter for science.”

This is an independent comment; Professor Taylor was not involved in this work.