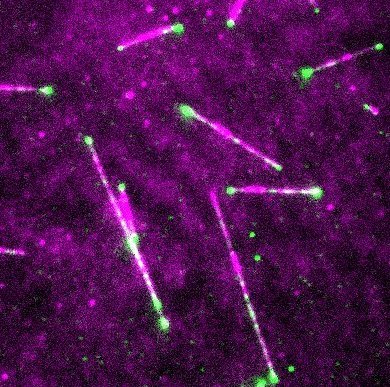 Scientists from Utrecht University have succeeded in applying advanced microscopy to visualise the activity of the widely used drug Taxol. Taxol is often used in cancer chemotherapy. A better understanding of the precise action of the drug offers starting points for less toxic and effective therapies. Utrecht scientists publish their findings together with international colleagues on 9 December in Nature Materials.

Taxol is a drug that is frequently used in chemotherapy of cancer. It acts on microtubules, cellular filaments that are involved in cell division and cell migration.

“Microtubules resemble spaghetti tubes made up of small balls. By labeling microtubules and the drugs with fluorescent molecules, we can follow how microtubules are formed and what happens when the drug binds to them”, says the last author Anna Akhmanova of Utrecht University.

Using advanced microscopy, Utrecht researchers, in collaboration with British, Swiss, Spanish and Chinese colleagues, were able for the first time to directly observe the effects of Taxol on growing microtubules.

“The fluorescent label allowed us to see under the microscope that the drug binds to growing microtubule ends. As soon as one molecule binds, more start to bind and a kind of hotspot is created. The ‘tube’ becomes more stable than usual at this location”, Akhmanova explains.

This is beneficial for the fight against cancer cells: the ability of cancer cells to divide and migrate is inhibited, which limits tumor growth and metastases.

To their surprise, the researchers also discovered that drugs that stabilise the cellular skeleton and destabilise it can have a synergistic effect.

“We didn’t expect this”, says Akhmanova. “For the first time we see these drugs in action. That is very special. By looking at the combined effect of drugs that affect microtubules, we can work towards therapies that are effective, but less toxic.”