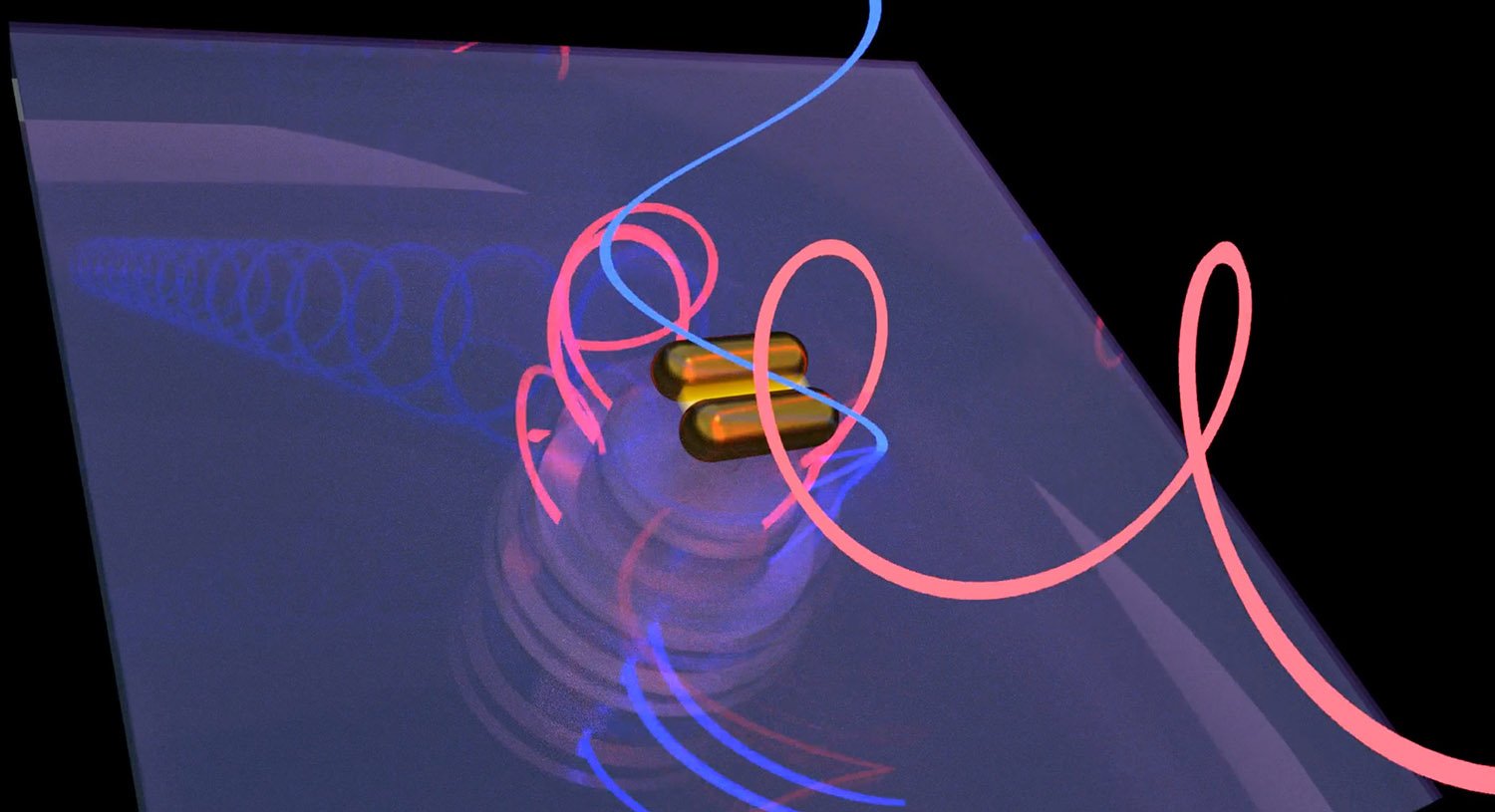 It’s always good when your intuition turns out to be right, but scientists at Rice University studying proteins and particles were more “right” than they expected.

The result was a surprise to the researchers who set out to untangle the mysterious interactions in mixtures of BSA and gold nanorods: the aggregation of metallic nanoparticles into chiral assemblies, protein chirality, and the resulting plasmonic properties. Light triggers mixtures of particles and proteins to scatter polarized light, but until now researchers haven’t known which interactions within the mixture were responsible for the signal and, most important for future sensing applications, whether they could be refined.

The work hints it may become possible to sense the handedness, or chirality, of single proteins, a potential boon for pharmaceutical companies that require drug purity. A molecule with the correct chirality can save a life, while the same molecule of the opposite chirality can be highly toxic.

The Rice experiments revealed multilevel chirality in the way BSA proteins prompted the 100-nanometer-long particles to align and in how the particles’ plasmons responded to light in the much smaller proteins’ presence. (Plasmons are resonating electron waves that ripple along the surface of a metal particle when triggered by light.)

The response was measured as circular dichroism (CD), which is a way to measure if a light wave’s electric field rotation has a preferential interaction with material in either a clockwise (right) or counterclockwise (left) direction.

CD signals are usually weak, but still help characterize the average conformation of protein ensembles. In the Rice study, plasmons acted as antennas to amplify CD from the surface-adsorbed chiral proteins, shifting the signal from the ultraviolet to the visible, referred to as plasmon coupled-CD.

Link said plasmon-coupled CD had previously been observed for mixtures of single nanoparticles, aggregates and chiral molecules, but no study until now revealed whether all the molecules and nanoparticles contributed equally to the signal.

They don’t in this case. The study revealed that only aggregated nanorod-protein complexes produce a CD signal, caused both by proteins in the gaps between nanoparticles and by chiral nanoparticle assemblies.

“We were trying to test a hypothesis about the origin of the chiral signal that other people have reported in studies of nanoparticle ensembles,” she said. “Is it from chiral nanostructures? Is it from the protein? And we found that it’s both. In addition, the protein biomolecule with a preferential handedness induces that handedness in much larger nanorod aggregates. That was the discovery we just didn’t expect.”

Link explained nanorod chirality is a matter of positioning.

“Two perpendicular nanorods are achiral,” he said. “If they’re parallel, they’re achiral. But if they’re aligned at other angles, they’re chiral. The difficulty was in designing an experiment to determine where the CD comes from when you have mixtures of proteins, nanorods and achiral and chiral aggregates.”

Using a new technique developed in the Link lab called single-particle circular differential scattering (CDS) spectroscopy, the researchers confirmed that only aggregated nanorod-BSA complexes exhibited chirality. When the aggregates were excited with visible light, the antenna effect of the plasmonic hot spots amplified the normally weak chiral response of proteins in the inter-particle gaps.

Key to their success, Landes said, was a custom imaging program by Rice graduate student and co-author Rashad Baiyasi that let them identify single particles and small aggregates among the nanoscale samples and then relate the spectroscopy to the hot spots and preferential ordering.[

Spring sabbaticals for both Landes and Link turned out to be perfect timing for the project as well, as they got the attention of co-author Jennifer Dionne, director of the Stanford Photonics Research Center and a specialist in cryogenic electron microscopy. Dionne showed that freezing the particle-protein solutions would allow the researchers to directly view how the particles aligned in 3D.

That helped eliminate any uncertainty that flattening the chiral assemblies on a surface was changing the signal.

In another experiment, the researchers replaced BSA with dissolved table salt to see how the particles reacted. They found the nanorods would aggregate, but into a mixture of achiral and chiral arrangements having the same amount of left- and right-handed species without an overall preferred handedness, and therefore without an ensemble CD signal.

“It confirmed that BSA biases the formation of a certain handedness of nanostructures,” Link said. “We still don’t know why or how general this phenomenon is.”

Landes said the researchers are “about 14 steps” from judging the chirality of a single protein. If that’s possible at all, she said the Rice discovery may provide the only path toward label-free sensing of single protein conformations. That has value beyond measure for pharmaceutical chemists who struggle to create batches of proteins with a particular handedness, a critical factor in drug design.

“The ultimate dream has two parts: One is that we can detect conformations of single proteins dynamically, and the other is that we can do it inside living tissue,” Landes said. “There’s no way ever that you could use (invisible) ultraviolet light to do that. The only way to image inside something alive – a cell or an animal – would be to shift that light to the red, as we’ve done in these experiments.”