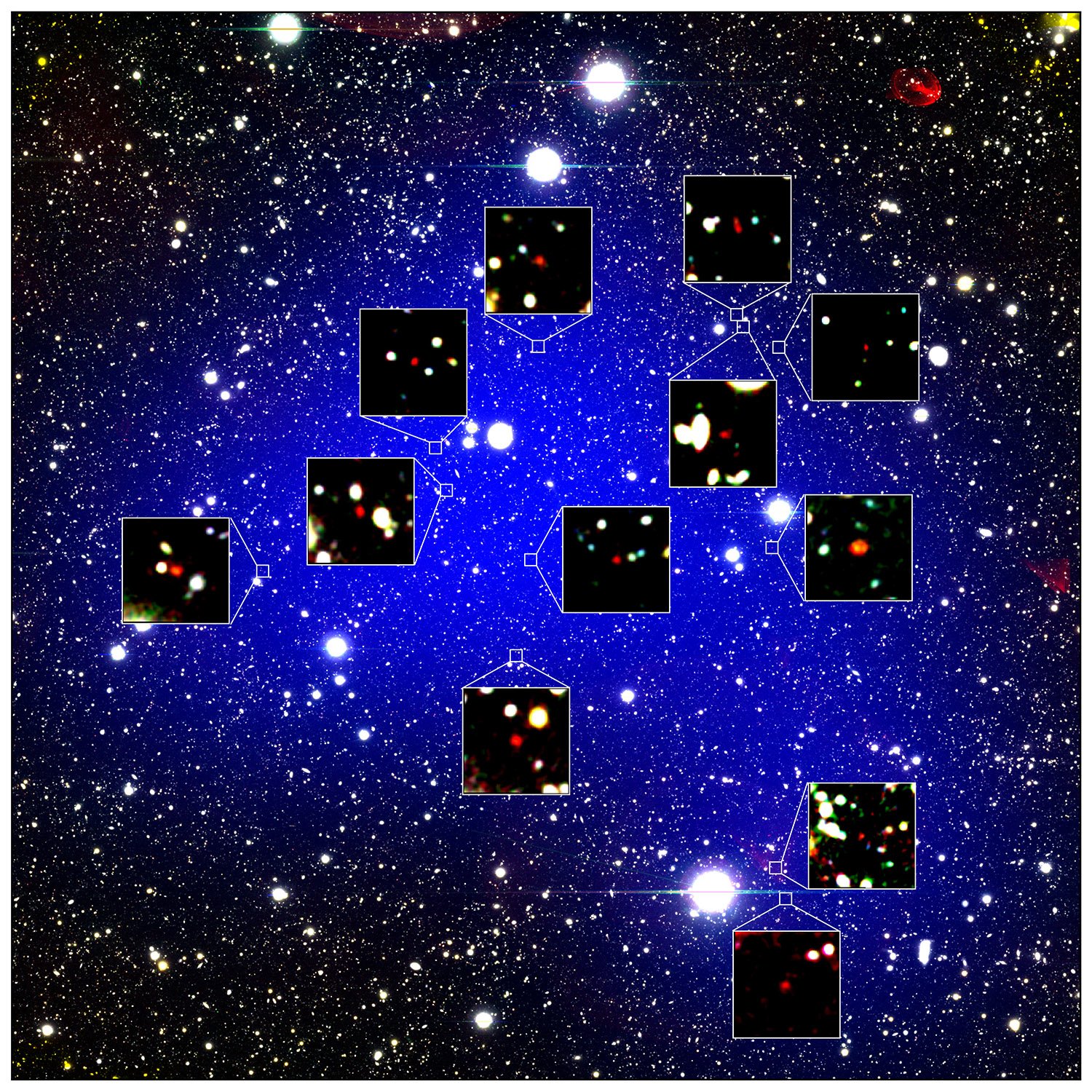 Using the Subaru, Keck, and Gemini Telescopes, an international team of astronomers has discovered a collection of 12 galaxies which existed about 13.0 billion years ago. This is the earliest protocluster ever found. One of the 12 galaxies is a giant object, known as Himiko, which was discovered a decade ago by the Subaru Telescope and named for a mythological queen in ancient Japan. This discovery suggests that large structures such as protoclusters already existed when the Universe was only about 800 million years old, 6 percent of its present age.

In the present Universe, galaxy clusters can contain hundreds of members, but how these clusters form is a big question in astronomy. To understand the formation of clusters, astronomers search for possible progenitors in the ancient Universe. A protocluster is a dense system of dozens of galaxies in the early Universe, growing into a cluster.

Yuichi Harikane, a JSPS fellow at the National Astronomical Observatory of Japan who led the team of astronomers explains, “A protocluster is a rare and special system with an extremely high density, and not easy to find. To overcome this problem, we used the wide field of view of the Subaru Telescope to map a large area of the sky and look for protoclusters.”

In the map of the Universe made by the Subaru Telescope, the team discovered a protocluster candidate, z66OD, where galaxies are 15 times more concentrated than normal for that era. The team then conducted follow-up spectroscopic observations using the W.M. Keck Observatory and Gemini North telescope, and confirmed 12 galaxies which existed 13.0 billion years ago, making it the earliest protocluster known to date.

Interestingly, one of the 12 galaxies in z66OD was a giant object with a huge body of gas, known as Himiko, which was found previously by the Subaru Telescope in 2009. “It is reasonable to find a protocluster near a massive object, such as Himiko. However, we’re surprised to see that Himiko was located not in the center of the protocluster, but on the edge 500 million light-years away from the center.” said Masami Ouchi, a team member at the National Astronomical Observatory of Japan and the University of Tokyo, who discovered Himiko in 2009. Ironically, the mythological queen Himiko is also said to have lived cloistered away from her people. Ouchi continues, “It is still not understood why Himiko is not located in the center. These results will be a key for understanding the relationship between clusters and massive galaxies.”