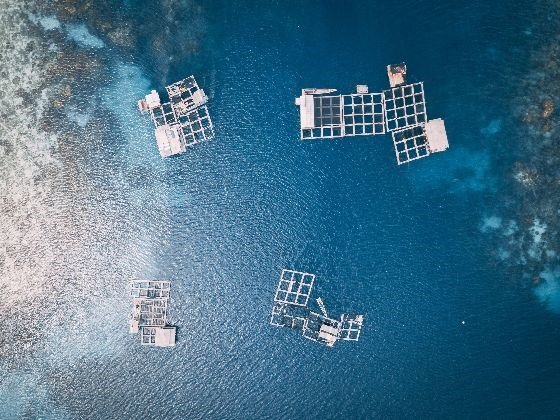 In a study published in Global Change Biology, researchers at the University of British Columbia looked at how climate change could impact 85 species of fish and molluscs that are most commonly farmed in seawater. They found that certain species like Atlantic salmon, European seabass and cobia, while certain areas like the tropics and the Arctic, could be particularly vulnerable to the impacts of climate change.

Take Canada’s Pacific coast: by the mid-21st century, the region is projected to lose between 60 to 84 per cent of area currently suitable for Atlantic salmon farming under a strong mitigation, low greenhouse gas emissions, and no mitigation, high emissions scenarios, respectively.

In contrast, the region would gain 46 per cent more area for Pacific cupped oyster farming under the high emissions scenario by the 2050s, while Norway and Sweden could respectively see gains between 48 and 100 per cent in areas suitable for Atlantic salmon farming.

“Overall, higher latitudes are projected to gain almost 40 per cent more species, while tropical to subtropical regions could lose between 10 and 40 per cent of species suitable for marine aquaculture by the 2050s,” said lead author Muhammed Oyinlola, a postdoctoral fellow at UBC’s Institute for the Oceans and Fisheries, who was a PhD student with the Nippon Foundation-UBC Nereus Program when he conducted the study. “Tropical and subtropical regions rely the most heavily on seafood for food security, income and employment, but our projections show that they are likely to suffer the greatest losses.”

The study combined environmental data such as temperature, salinity, oxygen levels and the locations of known existing farm operations to calculate how many species could presently be farmed in countries’ exclusive economic zone, that mostly encompasses waters within 200 nautical miles from the coast. The researchers then projected how many species will be available under different climate scenarios in the future.

Some of the world’s smallest island nations and states in the pacific and western Indian Ocean, for example, could see the number of species available for marine aquaculture decline by 100 per cent in a few decades’ time under the high emission scenarios. At the same time, Panama, which is home to one of the world’s largest open-ocean fish farm, could see a near total loss in area for cobia farming – a species considered to be one of the best suited for offshore aquaculture.

“People are counting on aquaculture to produce seafood to meet the growing demand while capture fisheries have reached their limits or being over-exploited. However, this study highlights that fish farming will not be exempt from the impacts of climate change,” said William Cheung, professor and principal investigator of the study and Canada Research Chair in Ocean Sustainability under Global Change at UBC’s Institute for the Oceans and Fisheries.

While some northern regions such as Norway or Sweden are projected to gain more species and area for marine aquaculture, such opportunities pose new risks as well. Arctic ecosystems for example are very sensitive to disturbance from human activities, Oyinlola explains.

“Ultimately, the most effective ways to ensure our seafood security is to mitigate climate change and eliminate overfishing,” said Cheung.