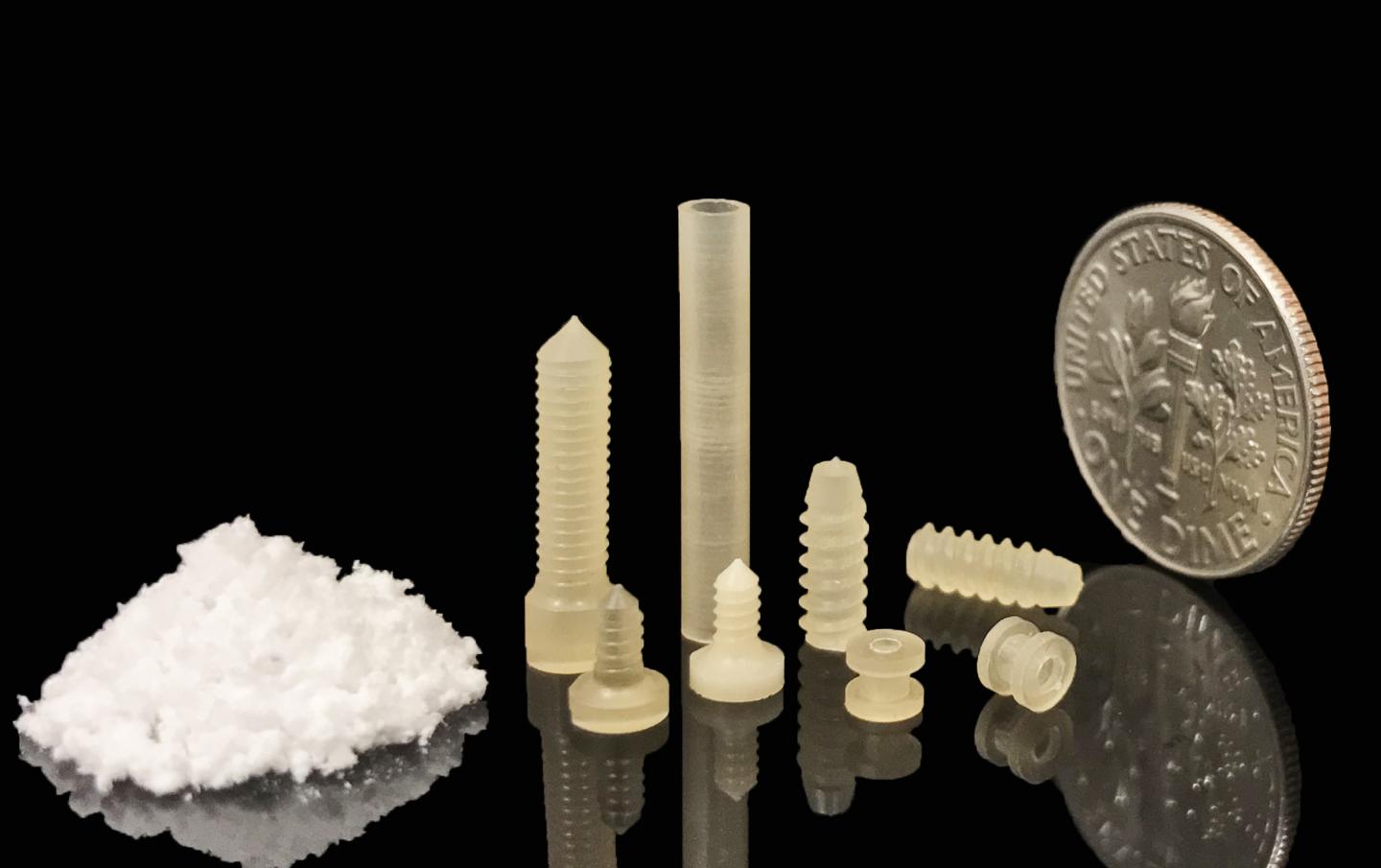 Researchers led by engineers at Tufts University have developed a novel, significantly more efficient fabrication method for silk that allows them to heat and mold the material into solid forms for a wide range of applications, including medical devices. The end products have superior strength compared to other materials, have physical properties that can be “tuned” for specific needs, and can be functionally modified with bioactive molecules, such as antibiotics and enzymes. The thermal modeling of silk, described in Nature Materials, overcomes several hurdles to enable manufacturing flexibility common to many plastics.

“We and others have explored the development of many silk-based devices over the years using solution-based manufacturing,” said David Kaplan, Stern Family Professor of Engineering at the Tufts University School of Engineering and corresponding author of the study. “But this new solid-state manufacturing approach can significantly cut the time and cost of producing many of them and offer even greater flexibility in their form and properties. Further, this new approach avoids the complications with solution-based supply chains for the silk protein, which should facilitate scale up in manufacturing.”

Silk is a natural protein-based biopolymer that has long been recognized for its superior mechanical properties in fiber and textile form, producing durable fabrics and used in clinical sutures for thousands of years. Over the past 65 years, scientists have devised ways to break down the fibers and reconstitute the silk protein, called fibroin, into gels, films, sponges and other materials for applications that range from electronics to orthopedic screws, and devices for drug delivery, tissue engineering, and regenerative medicine. However, breaking down and reconstituting fibroin requires a number of complex steps. Additionally, the instability of the protein in aqueous soluble form sets limits on storage and supply chain requirements, which in turn impacts the range and properties of materials that can be created.

The researchers reported that they have overcome these limitations by developing a method for solid-state thermal processing of silk, resulting in the molding of the protein polymer directly into bulk parts and devices with tunable properties. The new method – similar to a common practice in plastics manufacturing – involves the fabrication of nanostructured ‘pellets’ with diameters from 30 nanometers to 1 micrometer that are produced by freeze drying an aqueous silk fibroin solution. The nanopellets are then heated from 97 to 145 degrees Celsius under pressure, when they begin to fuse. The pleated pattern structure of the silk protein chains become more amorphous, and the fused pellets form bulk materials that are not only stronger than the solution-derived silk materials but also superior to many natural materials such as wood and other synthetic plastics, according to the researchers. The pellets are an excellent starting material since they are stable over long periods and thus can be shipped to manufacturing sites without the requirement for bulk water, resulting in significant savings in time and cost.

The properties of the heat molded silk, such as flexibility, tensile and compression strength, can be tuned to specific ranges by altering the conditions in the molding process, such as temperature and pressure, while the bulk materials can be further machined into devices, such as bone screws and ear tubes, or imprinted with patterns during or after the initial molding. Adding molecules such as enzymes, antibiotics or other chemical dopants allows for the modification of the bulk materials into functional composites.

To demonstrate applications, the researchers tested the bone screws developed with solid state molding in vivo and found they showed biocompatibility as implanted devices, where they supported the formation of new bone structure on the screw surfaces without inflammation. The silk screws were also able to resorb as they were being replaced by bone tissue. Resorption rate can be tuned by preparing screws at different temperatures, ranging from 97 degrees to 145 degrees Celsius, which alters the crystallinity of the bulk material, and therefore its ability to absorb water.

The researchers also manufactured ear tubes – devices used to help drain infected ear canals – doped with a protease, which breaks down the silk polymer to accelerate degradation as needed after the tube has served its function.

“The thermal molding process is made possible because the amorphous silk has a well-defined melting point at 97 degrees Celsius, which earlier solution-based preparations did not exhibit,” said Chengchen Guo, post-doctoral scholar in the Kaplan lab and co-first author of the study.

“That gives us a lot of control over the structural and mechanical properties of what we make.” Chunmei Li, Tufts research assistant professor who teamed up with Guo as first author, added that “the starting material – the nanopellets – are also very stable and can be stored over long periods. These are significant advances that can improve the application and scalability of silk product manufacturing.”