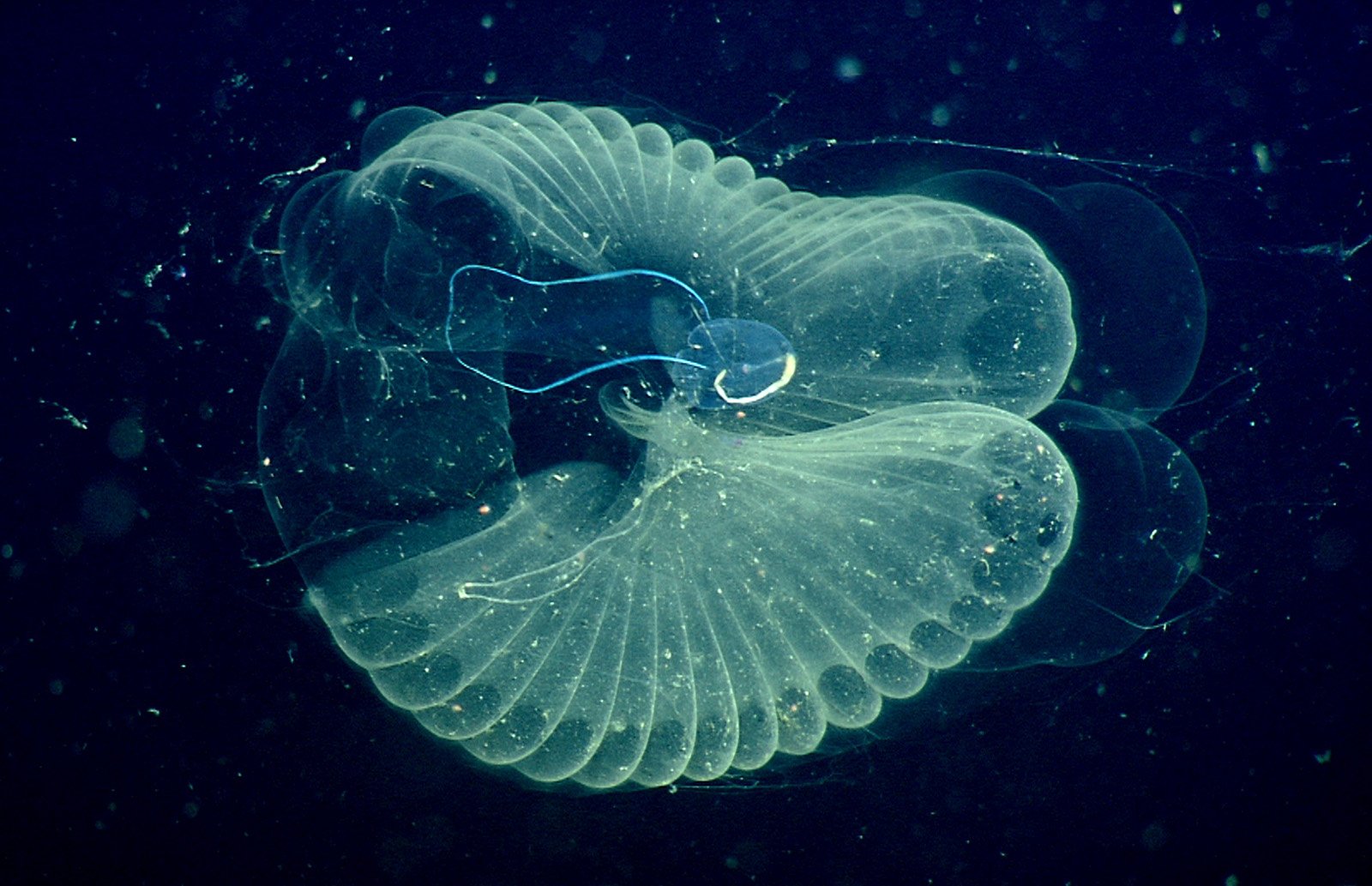 Many people have heard of the “Great Pacific Garbage Patch,” a vast area of ocean between California and Hawaii where ocean currents concentrate plastic pollution. However, it turns out there may also be a lot of plastic far below the ocean’s surface.

A newly-published study in Scientific Reports shows that plastic debris less than 5 millimeters across, known as microplastic, is common from the surface to the seafloor. It may also be entering marine food webs, both at the surface and in the deep. Finally, the study suggests that most of this microplastic is coming from consumer products.

This is the first study to look systematically at microplastic, with repeated sampling at the same locations and a range of depths, from just beneath the ocean surface to depths of 1,000 meters.

The study in California’s Monterey Bay National Marine Sanctuary also found that small ocean animals are consuming microplastic, which introduces the particles into food webs from near-surface waters down to the deep seafloor.

“Our findings buttress a growing body of scientific evidence pointing to the waters and animals of the deep sea, Earth’s largest habitat, as the biggest repository of small plastic debris,” said Anela Choy, the lead author of the paper.

“Our study demonstrates a link between microplastics distributed across the water column and entry of this foreign material into marine food webs by important marine animals, such as pelagic crabs and giant larvaceans.”

The groundbreaking research was a joint effort by the Monterey Bay Aquarium Research Institute (MBARI) and Monterey Bay Aquarium. Choy conducted the research while a postdoctoral fellow at MBARI. She is currently an assistant professor at Scripps Institution of Oceanography at the University of California San Diego.

Kakani Katija, an MBARI engineer on the team, added, “This research shows how we can leverage scientific, engineering and conservation expertise to develop new technology that provides powerful insights into how humans are impacting the ocean.”

Microplastic is pervasive from the surface to the seafloor

Using MBARI’s underwater robots, equipped with sampling devices designed specifically for this project, the researchers filtered plastic particles out of seawater on multiple occasions at two different locations and at various depths–from five to 1,000 meters below the surface of Monterey Bay, California. Some samples were collected just offshore of Moss Landing Harbor, but the majority were collected about 25 kilometers from shore, in the deep waters of Monterey Canyon.

Microplastic was discovered in all animals sampled

In addition to sampling the water, the researchers also looked at concentrations of microplastic particles in specimens of two marine species that filter-feed in the water column: pelagic red crabs and giant larvaceans. The team found microplastic in all of the animal specimens they surveyed.

Pelagic red crabs and tadpole-like giant larvaceans are critical parts of ocean food webs. Pelagic red crabs are commonly found in large numbers near the ocean’s surface, where they are consumed by many species of fishes, including tunas. Larvaceans create large mucus filters that collect organic material–and microplastic–then discard those filters, which are consumed by other animals as they sink to the ocean floor.

Equipped with a microscope and a laboratory technique called Raman spectroscopy, researchers from Arizona State University contributed to the study.

The most abundant plastics found–polyethylene terephthalate (PET), polyamide, and polycarbonate–are commonly used in consumer products, including food and beverage packaging such as single-use drink bottles and to-go containers. Most of the microplastic particles the researchers discovered were highly weathered, suggesting that they had been in the environment for months or years.

Even though Monterey Bay is home to commercial fisheries, the researchers found very few particles of polypropylene or other plastics commonly used in local fishing gear. The researchers also detected more microplastic particles offshore than nearshore.

“This suggests that most of the particles did not originate from local fishing gear,” explained Kyle Van Houtan, chief scientist at Monterey Bay Aquarium and one of the study’s co-authors.

“It also suggests that at least some of the microplastic was transported into the area by ocean currents.”

This finding could indicate that plastic is widely distributed in the deep ocean, and may even be concentrated there.

Bruce Robison, a senior scientist at MBARI and co-author on the paper, noted: “These results are intriguing and show the need for similar deep-water surveys in other locations, so we can find out how widespread the problem is.”

Van Houtan further explained the significance of the study and pointed to a possible solution. “The ubiquitous presence of plastic pollution throughout the water column points to source reduction–making and using less plastic in the first place–as one of the most effective means of solving this issue,” he said.

“It may be virtually impossible to remove existing microplastic from the deep sea,” he continued. “But when we slow the flow of plastic from land, we can help prevent the increasing accumulation of plastic in our global ocean.”