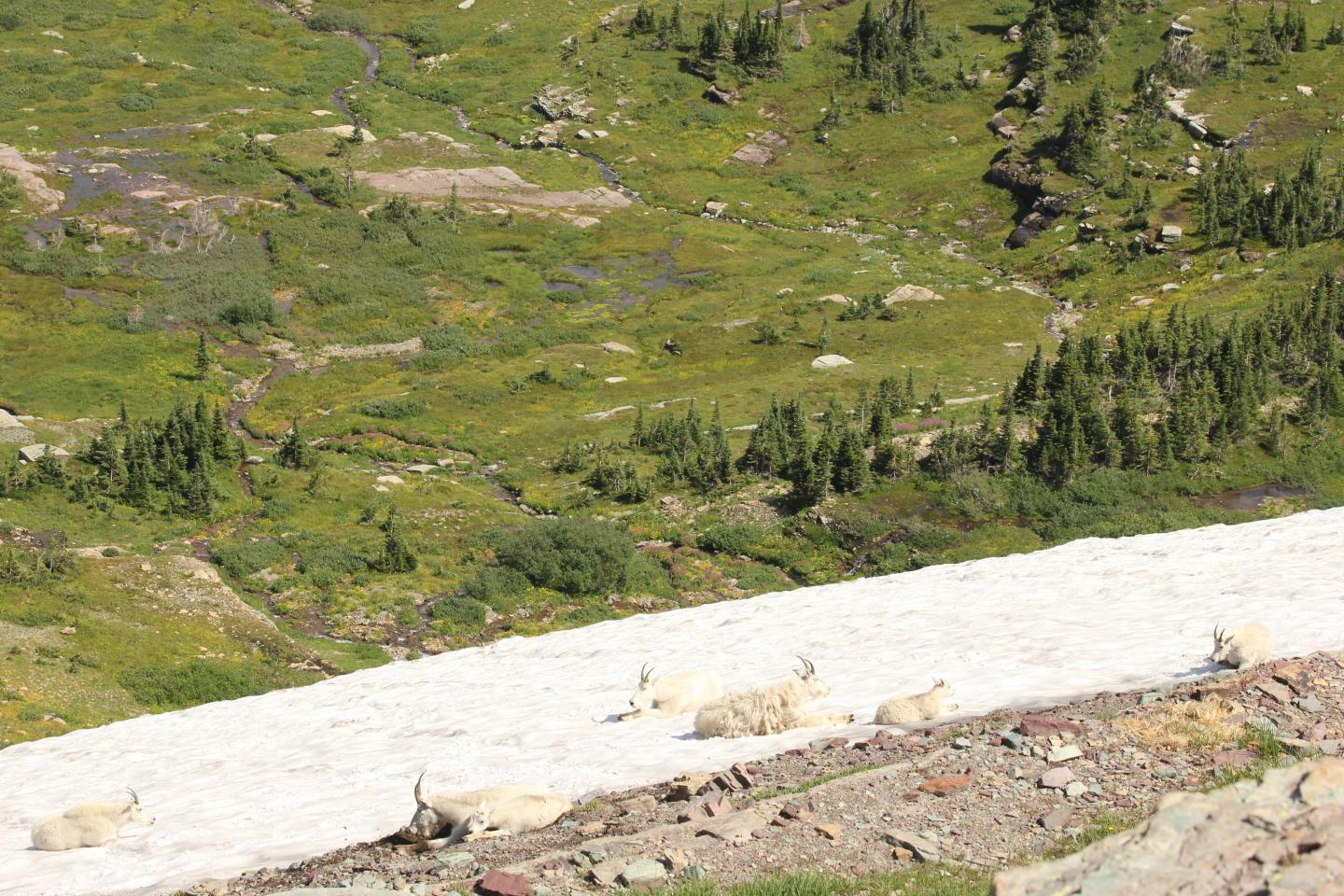 A new study in the journal PLOS One says Glacier National Park’s iconic mountain goats are in dire need of air conditioning.

Researchers from the University of Montana, Glacier National Park, and Wildlife Conservation Society (WCS) found that mountain goats (Oreamnos americanus) in Glacier National Park seek out patches of snow in the summertime to reduce heat stress. When they do, breathing rates went down, a behavioral strategy that results in less energy expended.

The trouble is Glacier has already lost some 75% of its glaciers and many snow patches are rapidly dwindling. The park had over 100 glaciers when it was established in 1910. In 2015, only a couple dozen met the size criteria to be considered active glaciers

The study’s authors, Wesley Sarmento of the University of Montana, Mark Biel of Glacier National Park, and WCS Senior Scientist, Joel Berger, have studied mountain goats in the field since 2013 to better understand thermal environments and their changes on this cold-adapted species in Glacier.

To understand stressors to goats and ways in which they combat heat, the scientists performed observations of animals on and off ice patches on hot summer afternoons, and days with and without wind. To avoid higher temperatures, the goats sought snow patches for resting, and when they found them, breathing rates were reduced by as much as 15 percent.

The authors note that while people seek shade or air conditioning to stabilize their metabolic rates and animals like coyotes or marmots seek dens, mountain goats in the shade-less environs above treeline have less opportunity to reduce exposure to rising temperature. Goats that were observed resting in shade did not have significant reductions in respirations.

“10,000 years ago when the North American climate was cooler there were mountain goats in Grand Canyon, but certainly increasing temperatures and drier weather ultimately contributed to their extinction in that area,” says Sarmento.

Says Biel: “This work is important to shed light on the impacts of a changing climate on these iconic animals and their habitat. How certain species may adapt as the changes continue is critical in understanding their persistence on the landscape into the future.”

Like people from Europe to the America’s and far beyond, high temperatures cause stress and death. In 2019, more than 1,000 people died from heat exposure in France and Spain.

“Just as people are feeling the heat of a warming planet with thousands and thousands struggling during summer without natural cooling systems, we’re seeing very clearly that what happens to people is also happening to animals -we’re all in this together.”