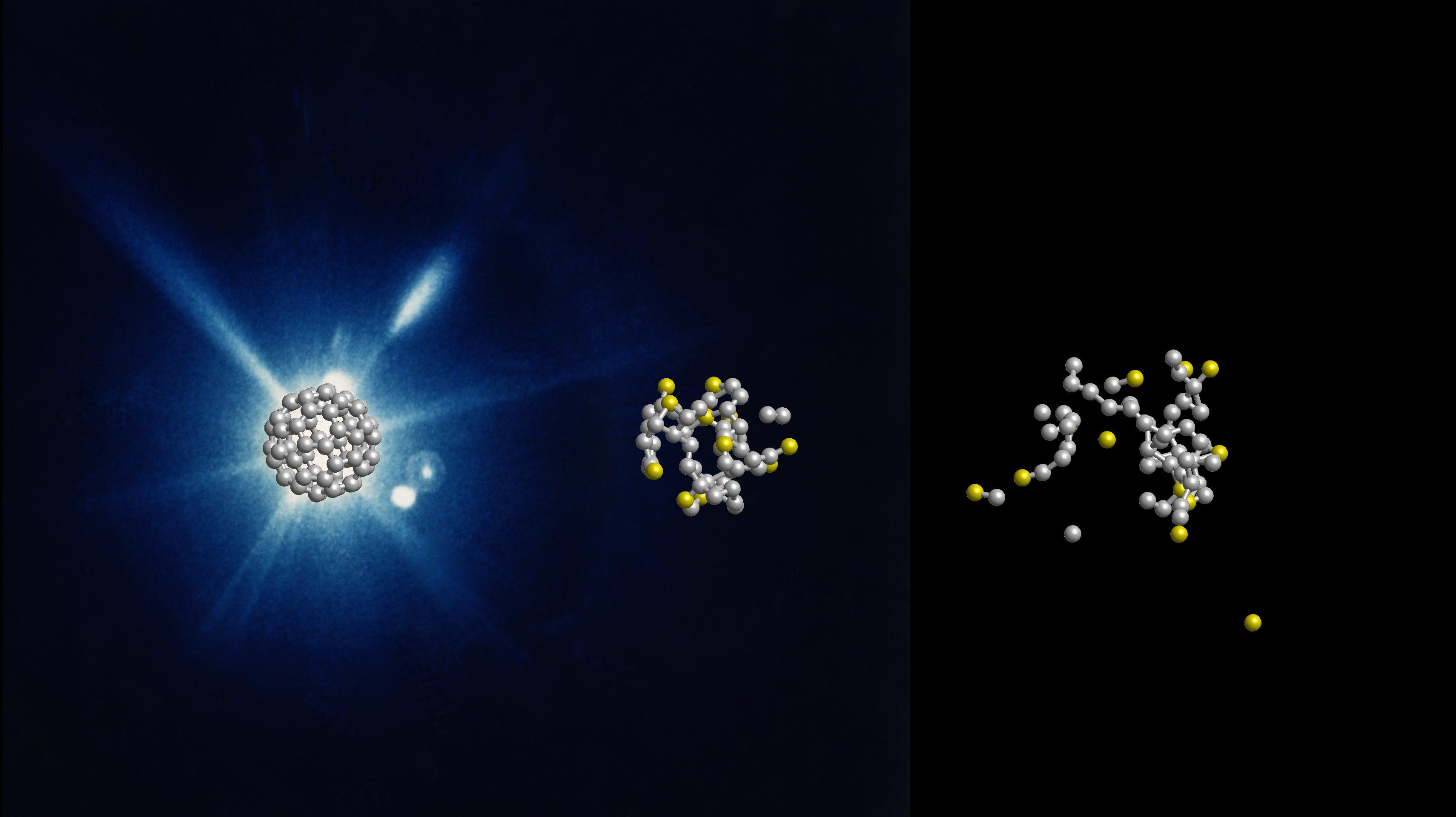 An international research team has observed in real time how football molecules made of carbon atoms burst in the beam of an X-ray laser. The study shows the temporal course of the bursting process, which takes less than a trillionth of a second, and is important for the analysis of sensitive proteins and other biomolecules, which are also frequently studied using bright X-ray laser flashes. The football molecules disintegrate more slowly and differently than expected, as the team around Nora Berrah from the University of Connecticut and Robin Santra from DESY report in the journal Nature Physics. This observation contributes to a more detailed protein analysis with X-ray free-electron lasers (XFEL).

The researchers had experimented with buckminster fullerenes, or buckyballs for short. These spherical molecules consist of 60 carbon atoms arranged in alternating pentagons and hexagons like the leather coat of a football.

“Buckyballs are well suited as a simple model system for biomolecules,” explains Santra, who is a Lead Scientist at DESY at the Center for Free-Electron Laser Science (CFEL) and a physics professor at the Universität Hamburg. “Since they consist of only one type of atom and have a symmetrical structure, they can be well represented in theory and experiment. This is a first step before the investigation of molecules from different types of atoms.”

Using the X-ray laser LCLS (Linac Coherent Light Source) at the SLAC National Accelerator Laboratory in California, the scientists shot short X-ray flashes of about 20 femtoseconds (quadrillionths of a second) duration at individual football molecules and observed their effect in real time with a temporal resolution in the range of about ten femtoseconds. The data show that the X-ray flash knocks electrons out of about one in five of the 60 carbon atoms.

“After that, nothing happens for some time. Only after a few dozen femtoseconds do carbon atoms gradually detach from the molecule,” reports Santra. “What follows then is not an actual explosion,” explains the scientist. “Instead, the buckyballs disintegrate comparatively slowly. Carbon atoms gradually evaporate – with many more neutral ones than electrically charged ones, which was surprising.”

Since the fragmentation of the buckyballs on this time scale is not explosive but happens gradually, the researchers speak of the evaporation of the atoms. The experimental data could only be meaningfully interpreted with the help of theoretical modelling of the process.

“Typically, about 25 neutral and only 15 electrically charged carbon atoms fly out of the molecule,” Santra explains. “The rest form fragments of several atoms.”

The whole process takes about 600 femtoseconds. This is still unimaginably short by human standards, but extremely long for structural analysis with X-ray lasers. “In the typically 20 femtoseconds of an X-ray laser flash, the atoms move a maximum of 0.1 nanometers – that is in the range of individual atom diameters and smaller than the measurement accuracy of structural analysis.” One nanometer is one millionth of a millimeter.

For the structural analysis of proteins, researchers usually grow small crystals from the biomolecules. The bright X-ray laser flash is then diffracted at the crystal lattice and generates a typical diffraction pattern from which the crystal structure and with it the spatial structure of the individual proteins can be calculated. The spatial structure of a protein reveals details about its exact function. The protein crystals are very sensitive and evaporate through the X-ray laser flash. However, previous investigations had shown that the crystal remains intact long enough to generate the diffraction image before evaporation and thus to reveal its spatial structure.

The new study now confirms that this is also the case with individual molecules that are not bound in a crystal lattice.

“Our findings with buckyballs are likely to play a role in most other molecules,” Santra emphasises.

ince many biomolecules are notoriously difficult to crystallise, researchers hope to be able to determine the structure of ensembles of non-crystallised proteins or even individual biomolecules with X-ray lasers in the future. The results obtained now lay the foundation for a deeper understanding and quantitative modelling of the radiation damage in biomolecules induced by X-ray laser flashes, the scientists write.