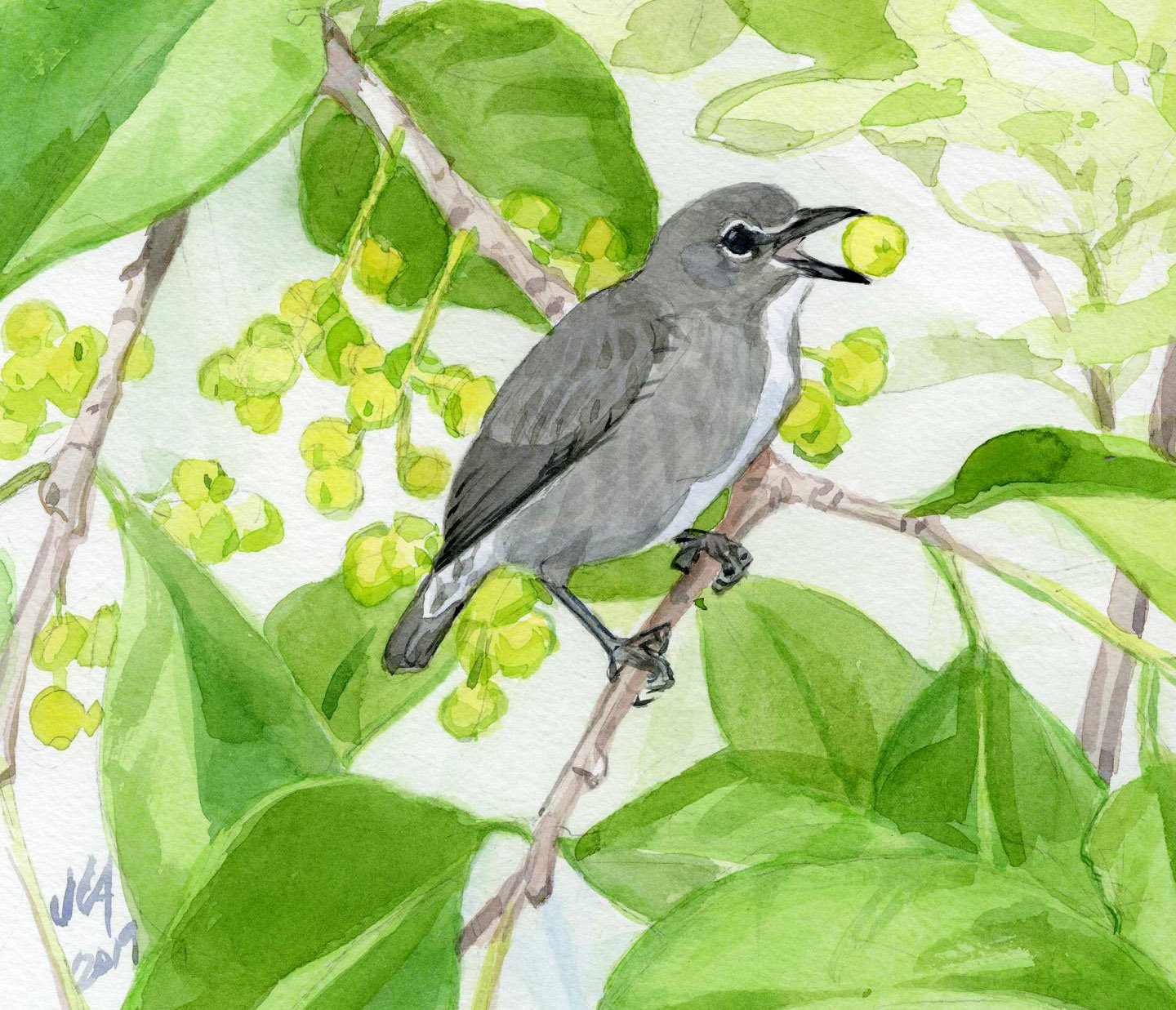 Scientists with the Smithsonian’s National Museum of Natural History and collaborators surveying the birdlife of Borneo have discovered a startling surprise: an undescribed species of bird, which has been named the Spectacled Flowerpecker. While scientists and birdwatchers have previously glimpsed the small, gray bird in lowland forests around the island, the Smithsonian team is the first to capture and study it, resulting in its formal scientific description as a new species.

The team’s study, reported Oct. 17 in the journal Zootaxa, confirms that the bird belongs to a colorful family of fruit-eating birds known as flowerpeckers, which are found throughout tropical southern Asia, Australia and nearby islands. But according to molecular analysis, the new species is not closely related to any other known flowerpecker.

“This bird is totally unique,” said Christopher Milensky, collections manager for the museum’s Division of Birds and the leader of the Smithsonian survey that led to the new discovery. “It’s unlike anything else, and it is the latest example of the rich biodiversity that can be found in this region.”

The tropical island of Borneo in Southeast Asia is home to hundreds of species of birds, including dozens that can be seen nowhere else in the world. But the Spectacled Flowerpecker has drawn special attention since it was first photographed and reported on by a group of birders in 2009. The bird’s stout, pot-bellied body and stubby bill immediately suggested it was a flowerpecker, but its distinctive facial markings – the prominent white arcs above and below the eyes that give the bird its spectacled appearance – were unfamiliar. That group, which included University of Leeds ornithologist David Edwards, dubbed the bird with a common name -Spectacled Flowerpecker – and proposed that it might be a species new to science.

For the next 10 years, birds matching the description of the Spectacled Flowerpecker were spotted periodically in lowland forests around the island. But it was not until earlier this year, when Milensky and Jacob Saucier, museum specialist and the team lead on the study formally describing the new species, found the elusive creature in a remote wildlife preserve in Southwestern Borneo, that scientists had an opportunity to study the Spectacled Flowerpecker directly.

Milensky and Saucier were collaborating with Malaysia’s Sarawak Forestry Corporation to document the diversity of bird species living in the Lanjak Entimau Wildlife Sanctuary. Their research site was miles from any reported Spectacled Flowerpecker sightings, so discovering one was unexpected. Still, Milensky said, he recognized it immediately.

“I was fairly certain that’s what it was, and I knew it had not been formally described and documented,” he said. “As soon as I saw it, I knew we had a new species of bird to describe.”

Milensky and Saucier returned to the museum to examine the bird closely, analyzing its external features and comparing its DNA to that of other flowerpeckers. Their genetic analysis turned up another surprise when the team realized how distinct the new bird was from its family members.

“It isn’t related to any of the other flowerpeckers all that closely,” Saucier said. “It’s a whole new species that distinctly stands out.”

The Smithsonian team also analyzed the bird’s diet. Like other flowerpeckers, the new species has been spotted eating mistletoe, a parasitic plant that grows high in the forest canopy. Through DNA analysis and close inspection of seeds from the bird’s gut, the team was able to identify the type of mistletoe that the bird eats. This information gives researchers a new perspective on this bird’s ecological needs and habitat preferences.

With more detailed information about the bird’s diet and ecology now available, people hoping to spot the new species will have a better idea of when and where to look, Saucier said. Despite being small, gray and keeping mostly to the treetops, the Spectacled Flowerpecker has already been seen in many locations across the island, suggesting it may be widespread.

“We think that wherever primary forest and mistletoe occur, there’s a good chance this bird could be there,” Saucier said.

The researchers hope their discovery will bring attention to the unexplored diversity that remains in the forests of Borneo – and the importance of conserving these threatened ecosystems. Protecting the region’s natural resources from logging, palm plantations and other sources of deforestation is critical to preserve endemic species, as well as the homes and livelihoods of the island’s indigenous people.

Saucier added that the knowledge and skills of the local people were essential in enabling the research team to access the wildlife preserve and animals for their study. The scientific name that the team chose for the Spectacled Flowerpecker, Dicaeum dayakorum, honors the Dayaks, the people who live in and are working to protect the island’s forests.