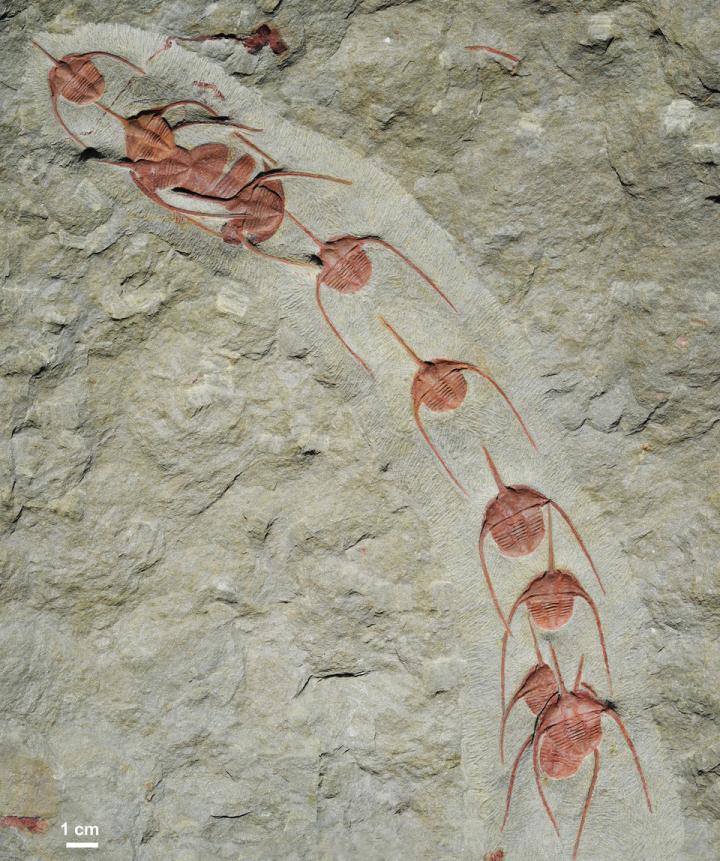 Fossils of ancient arthropods discovered in linear formation may indicate a collective behaviour either in response to environmental cues or as part of seasonal reproductive migration. The findings, which are being published in Scientific Reports this week, suggest that group behaviours comparable to those of modern animals existed as early as 480 million years ago.

Collective and social behaviour is known to have evolved through natural selection over millions of years and modern arthropods provide numerous examples, such as the migratory chains of caterpillars, ants or spiny lobsters. Yet, the origins and early history of collective behaviour has remained largely unknown.

Jean Vannier and colleagues described several linear clusters of Ampyx priscus, a trilobite arthropod from the lower Ordovician period (ca 480 Million years ago) of Morocco. The trilobites, which were between 16 and 22 millimetres long, had a stout spine at the front of their bodies and a pair of very long spines at the back. In each cluster of trilobite fossils examined by the authors, individuals were arranged in a line, with the front of their bodies facing in the same direction, maintaining contact via their spines. The authors suggest that, given the scale of the patterns seen, this consistent linearity and directionality is unlikely to be the result of passive transportation or accumulation by currents. Instead, it is more likely that Ampyx was killed suddenly while travelling, for example by being buried rapidly by sediment during a storm.

The authors suggest that Ampyx probably migrated in groups and used their long projecting spines to maintain a single-row formation by physical contact, as they moved along the seafloor. This may have been a stress response to disturbance of their environment by storms, detected by motion and touch sensors, which motivated Ampyx to migrate to quieter and deeper waters. A comparable behaviour is seen in present-day spiny lobsters. Alternatively, the pattern may have been the result of a seasonal reproductive behaviour involving the migration of sexually mature individuals to spawning grounds. Knowing that Ampyx was blind, the authors hypothesize that the trilobites may have coordinated using sensory stimulation via spines and chemicals.

The discovery shows that a 480-million-year-old arthropod may have used its neural complexity to develop a temporary collective behaviour.