Using an atomic-force microscope fitted with an electrode tip 1,000 times smaller than a human hair, University of Oregon researchers have identified in real time how nanoscale catalysts collect charges that are excited by light in semiconductors. 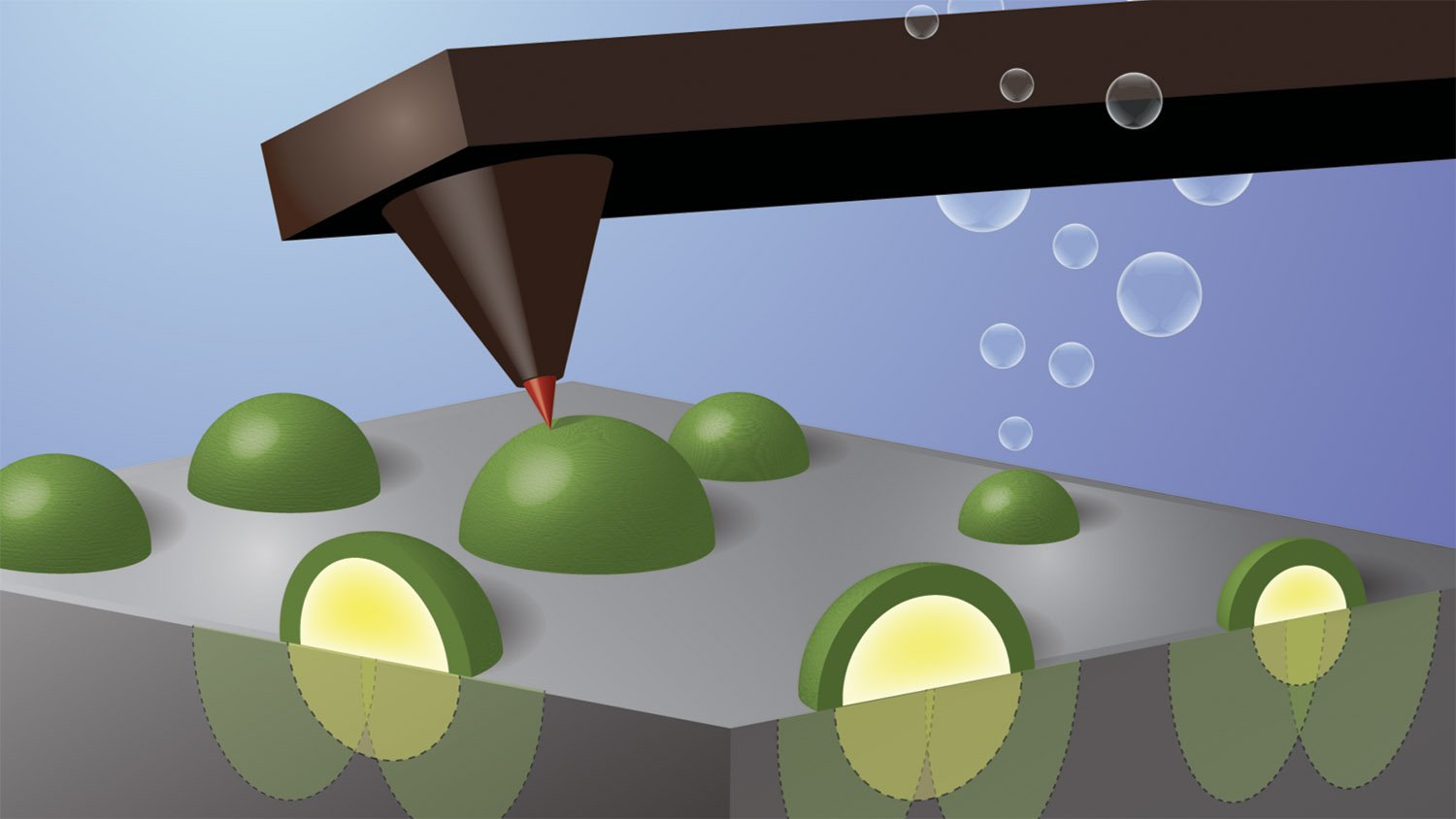 The findings open the door to improving systems that use light to make chemicals and fuels, for example by splitting water to make hydrogen gas or by combining carbon dioxide and water to make carbon-based fuels or chemicals, said Shannon W. Boettcher, a professor in the UO’s Department of Chemistry and Biochemistry and member of the university’s Materials Science Institute.

“We found a design principle that points to making catalytic particles really small because of the physics at the interface, which allows one to increase efficiency,” Boettcher said. “Our technique allowed us to watch the flow of excited charges with nanometer-scale resolution, which is relevant for devices that use catalytic and semiconductor components to make hydrogen that we can store for use when the sun is not shining.”

In the research, Boettcher’s team used a model system consisting of a well-defined single-crystal silicon wafer coated with metallic nickel nanoparticles of different sizes. The silicon absorbs sunlight and creates excited positive and negative charges. The nickel nanoparticles then selectively collect the positive charges and speed up the reaction of those positive charges with electrons in water molecules, pulling them apart.

Previously, Boettcher said, researchers could only measure the average current moving across such a surface and the average voltage generated by the light hitting the semiconductor. To look closer, his team collaborated with Bruker Nano Surfaces, the manufacturer of the UO’s atomic force microscope that images the topography of surfaces by tapping a sharp tip over it – much like a blind person tapping their cane – to develop the techniques needed to measure voltage at the nanoscale.

As the electrode tip touched each of the nickel nanoparticles, the researchers were able to record the buildup of holes by measuring a voltage – similar to how one tests the voltage output from a battery.

Surprisingly, the voltage measured as the device was operating depended strongly on the size of the nickel nanoparticle. Small particles were able to better select for the collection of excited positive charges over negative charges, reducing the rate of charge recombination and generating higher voltages that better split apart water molecules.

A key, Boettcher said, is that oxidation at the nickel nanoparticle surface leads to a barrier, much like overlapping ridges in a mountain valley, that prevents the negatively charged electrons from flowing to the catalyst and annihilating the positively charged holes. This effect has been termed “pinch-off” and was hypothesized to occur in solid-state devices for decades but never before directly observed in fuel-forming photoelectrochemical systems.

“This new technique is a general means to investigate the state of nanoscale features in electrochemical environments,” said the study’s lead author Forrest Laskowski, who was a National Science Foundation graduate research fellow in Boettcher’s lab. “While our results are useful for understanding photoelectrochemical energy storage, the technique could more broadly be applied to study electrochemical processes in actively-operating systems such as fuels cells, batteries, or even biological membranes.”

Laskowski is now a postdoctoral researcher at the California Institute of Technology in Pasadena.

Co-authors with Boettcher and Laskowski were: Sebastion Z. Oener, a postdoctoral researcher working under a fellowship from the Deutsche Forschungsgemeinschaft (German Research Foundation); Michael R. Nellist, a doctoral student now at Intel Corp. in Hillsboro, Oregon; Adrian M. Gordon, who earned a bachelor’s degree this year and is now a doctoral student at the University of Minnesota; David C. Bain, an undergraduate student from New York’s St. Lawrence University who participated in the UO’s summer Research Experience for Undergraduates program and is now pursuing a doctorate at the University of California, Berkeley; and UO doctoral student Jessica L. Fehrs.

A grant from the U.S. Department of Energy primarily funded the research, while the purchase of the atomic force microscope was funded by the National Science Foundation. Instrumentation used in the project is based in the Center for Advanced Materials Characterization in Oregon, a UO-based high-tech extension service available to researchers worldwide, and the Oregon Rapid Materials Prototyping Facility, funded by the Murdock Trust.

State of mind: The end of personality as we know it