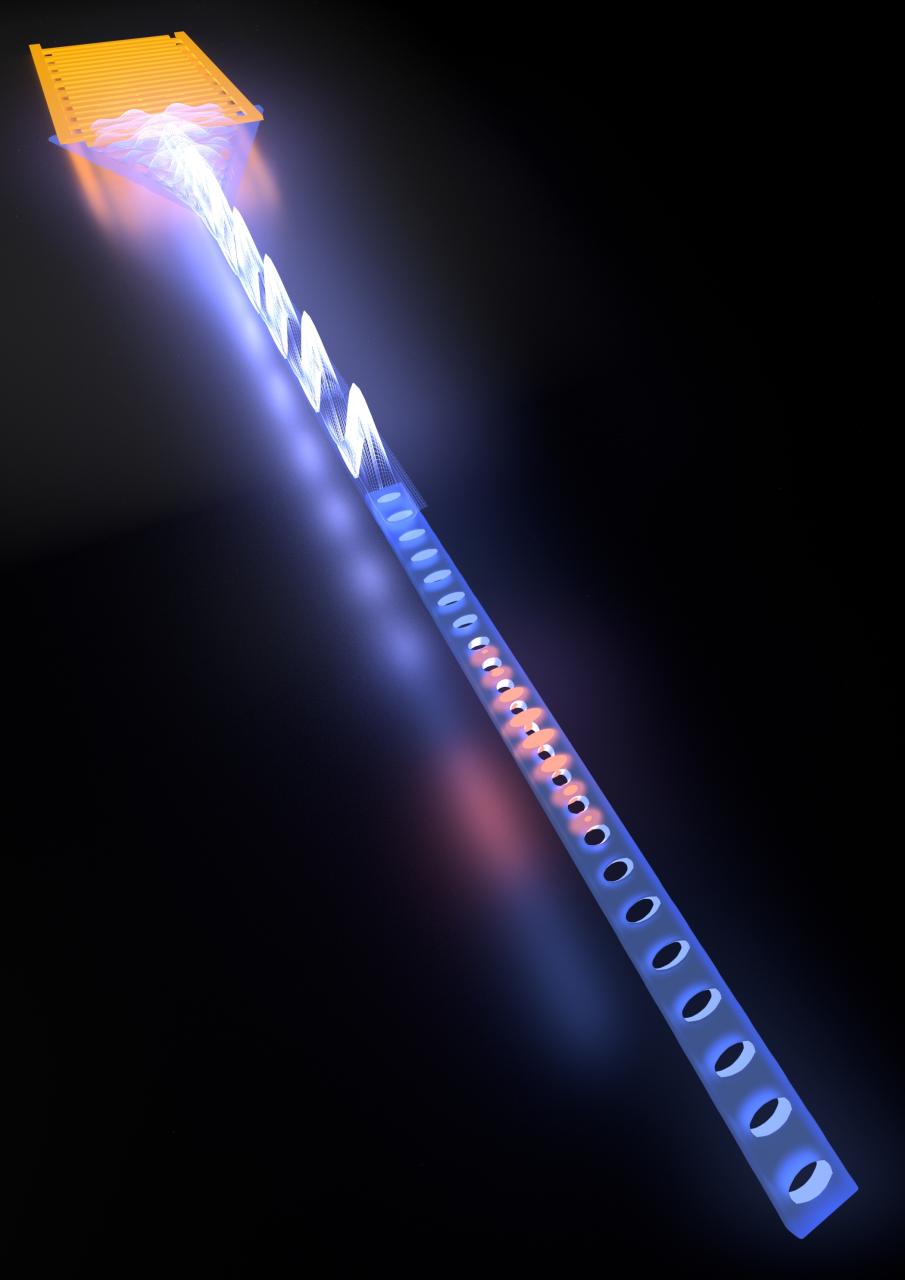 Researchers, led by Delft University of Technology, have made two steps in the conversion of quantum states between signals in the microwave and optical domains. This is of great interest for connecting future superconducting quantum computers into a global quantum network. This week they report on their findings in Nature Physics and in Physical Review Letters (pre-print).

Conversion between signals in the microwave and optical domains is of great interest, particularly for connecting future superconducting quantum computers into a global quantum network. Many leading eﬀorts in quantum technologies, including superconducting qubits and quantum dots, share quantum information through photons in the microwave regime. While this allows for an impressive degree of quantum control, it also limits the distance the information can realistically travel before being lost to a mere few centimeters.

At the same time, the ﬁeld of optical quantum communication has already seen demonstrations over distance scales capable of providing real-world applications. By transmitting information in the optical telecom band, ﬁber-based quantum networks over tens or even hundreds of kilometers can be envisaged.

“In order to connect several quantum computing nodes over large distances into a quantum internet, it is therefore vital to be able to convert quantum information from the microwave to the optical domain, and back”, says Prof. Simon Groeblacher of Delft University of Technology, whose group was leading both studies. ‘”This will not only be extremely interesting for quantum applications, but also for highly efficient, low-noise conversion between classical optical and electrical signals”.

Several promising approaches have been taken to realize a microwave to optics converter, for instance by trying to couple the signals through a mechanical system (oscillator). But they have so far all operated with a substantial thermal noise background.

“We have overcome this limitation and demonstrated coherent conversion between GHz microwave signals and the optical telecom band with minimal thermal background noise”, Moritz Forsch, one of the two lead authors on the publications, explains.

To achieve this, it was necessary to cool the mechanical oscillator into the quantum ground state of motion. The low thermal occupation forms the basis for quantum control over mechanical states. Rob Stockill, the other lead author, continues: ‘We use an integrated, on-chip electro-opto-mechanical device that couples surface acoustic waves driven by a resonant microwave signal to an optomechanical crystal. We initialize the mechanical mode in its quantum ground state, which allows us to perform the transduction process with minimal added thermal noise, while maintaining that microwave photons mapped into the mechanical resonator are eﬀectively upconverted to the optical domain.’

Groeblacher’s team has recently made another step forward in this field, by focusing on the use of novel piezoelectric materials. These materials, in which electrical fields are produced due to mechanical stress, could be of great interest for the transduction of quantum information between different carriers. The electromechanical coupling in principle allows for transduction of a quantum state between the microwave and optical frequency domains in this material. A promising approach is therefore to build integrated piezoelectric opto-mechanical devices, that are then coupled to microwave circuits.

“We have designed and characterized such a piezoelectric optomechanical device fabricated from gallium phosphide, in which a 2.9 GHz mechanical mode is coupled to a high quality factor optical resonator in the telecom band. The large electronic bandgap and the resulting low optical absorption of this new material, on par with devices fabricated from silicon, allows us to demonstrate quantum behavior of the structure”, says Prof. Groeblacher.

The device fabricated from gallium phosphide (GaP) far surpasses current achievements in GaAs or other piezoelectric materials typically used in similar approaches. The next step for the researchers is to build upon the successful operation of the GaP device in this parameter regime and further investigate the use of this exciting material. Given the wide electronic bandgap and piezoelectric properties of GaP, these research results open the door for novel quantum experiments as well as the potential for using such devices for microwave-to-optics conversion of single photons.