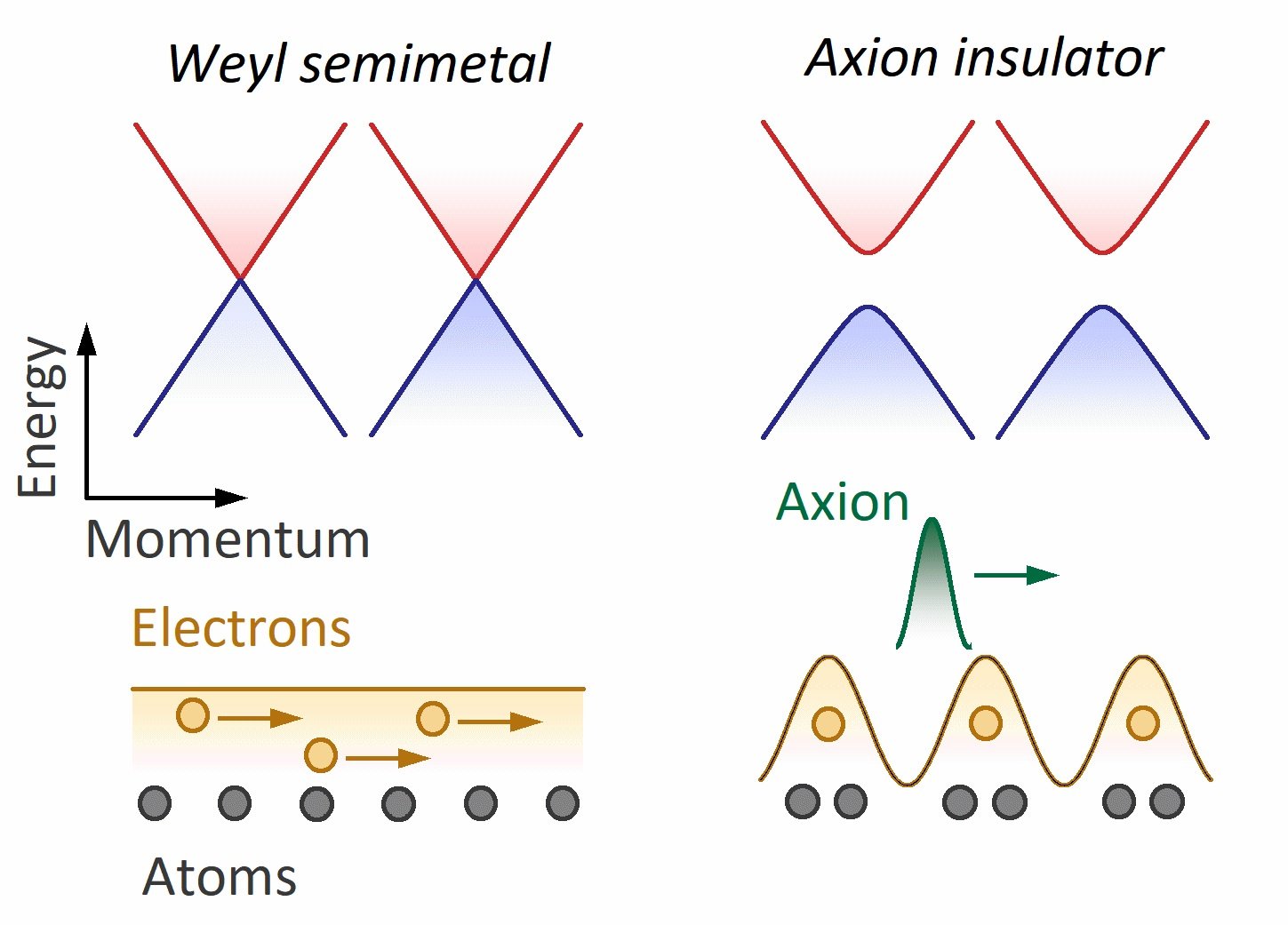 Scientists at the Max Planck Institute for Chemical Physics of Solids in Dresden, Princeton University, the University of Illinois at Urbana-Champaign, and the University of the Chinese Academy of Sciences have spotted a famously elusive particle: The axion – first predicted 42 years ago as an elementary particle in extensions of the standard model of particle physics.

The team found signatures of axion particles composed of Weyl-type electrons (Weyl fermions) in the correlated Weyl semimetal (TaSe4)2I. At room temperature, (TaSe4)2I is a one-dimensional crystal, in which electrical current is conducted by Weyl fermions. However, by cooling (TaSe4)2I down below -11 °C, these Weyl fermions themselves condense into a crystal – a so called “charge density wave” – which distorts the underlying crystal lattice of the atoms. The initially free Weyl fermions are now localized and the initial Weyl semimetal (TaSe4)2I becomes an axion insulator. Similar to the existence of free electrons in metallic atomic crystals, the Weyl semimetal-based charge-density-wave crystal hosts axions that can conduct electrical current. However, such axions behave quite differently from the more familiar electrons. When exposed to parallel electric and magnetic fields, they produce an anomalous positive contribution to the magnetoelectric conductivity.

Based on predictions from Andrei Bernevig’s group at Princeton University, the group of Claudia Felser in Dresden produced the charge density wave Weyl metalloid (TaSe4)2I and investigated the electrical conduction in this material under the influence of electric and magnetic fields. It was found that the electric current in this material below -11 °C is actually carried by axion particles.

The results of the experiments were published in Nature magazine.

“It’s very surprising that materials that we think we know are suddenly showing such interesting quantum particles,” says Claudia Felser, one of the lead authors of the paper.

Examining the novel properties of axion particles in table-top experiments could not only allow scientists to better understand the mysterious realm of quantum particles, but also to open up the field of highly correlated topological materials.

“Another building block to my lifelong dream of realizing ideas from astronomic and high-energy physics with table-top experiments in solids,” says Johannes Gooth.