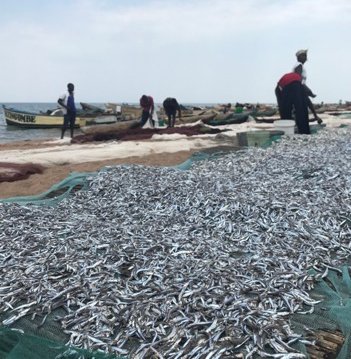 Synthesizing new data and assessment methods is showing how freshwater fish is an invisible superhero in the global challenge to feed poor rural populations in many areas of the world.

But there’s a problem: Invisibility is the wrong superpower.

Researchers from Michigan State University (MSU) and the Food and Agriculture Organization (FAO) of the United Nations have pulled together the most recent data and innovative approaches to measuring and communicating the impact inland fisheries have on food security, sustainability and economies. Fish harvests from the world’s rivers, streams, floodplains, wetlands, lakes, inland seas, canals, reservoirs and even rice fields can seem like forgotten, poor relatives of the better documented global fisheries in the oceans.

Yet in “A fresh look at inland fisheries and their role in food security and livelihoods” in the latest edition of Fish and Fisheries, scientists Abigail Bennett and Simon Funge-Smith (FAO), both members of MSU’s Center for Systems Integration and Sustainability, point out the power the world’s freshwater fisheries hold. Collating new assessments – for example modeling fish catch from household food consumption data, basin-level estimates and extrapolation from data-rich case studies – all reinforce the conclusion that inland fisheries catch is greater than current estimates, perhaps between 21 to 51%.

Now enough data has been compiled to generate a global economic valuation of inland fisheries. The economic value of reported global inland catch (in terms of first-sale value) is estimated at $24 billion. That’s approximately 24% of estimated first-sale value for marine fisheries even though total inland catch is only about 13% of marine catch. These new values suggest that the first landing prices of inland fish are higher than the average for marine fish, indicating their importance in local rural economies.

“Inland fisheries are providing crucial micronutrients and animal-source protein to sustain some 159 million people – sometimes the only protein accessible and affordable to them,” said Bennett, an assistant professor of fisheries at CSIS. “At the same time, as we’re worried food production systems are threatened by climate change, agricultural runoff, habitat alteration from hydropower development and other alternative uses of freshwater. We need to be looking more closely at the efficiency of inland fisheries in respect to land, water and energy use.”

The paper explores the scope of freshwater fish, and the difficulties in getting accurate representation of impact. What is clear is those who depend on the operations – particularly women who are underrepresented both in fishing and post-harvest work like fish trade and processing – are at risk both in access to work, and health and safety risks.

The paper outlines the known and unknown factors of inland fisheries, and the need to better quantify that which is currently compelling anecdotes. It also points out the tantalizing aspects of this sector of fishing – freshwater fish is one of the only accessible source of animal food to many of the poor, and it can be harvested fruitfully at a small scale, often without needing motor-powered boats and can have low-tech processing. Ninety-five percent of inland fisheries catch comes from developing countries, and 43 percent comes from low-income food-insecure countries.

To manage and sustain those benefits, the authors note it is critical to continue to improve methods for understanding of how much inland fish is being caught and how catches are changing over time.

“Even though inland fisheries catch equals 12% of global fish production (not accounting for underreporting), in particular places these catches are absolutely crucial to survival,” Funge-Smith said. “Improving assessment methods is key toward ending the vicious cycle in which data gaps lead to inland fisheries being undervalued in policy discussions, and lack of policy support undermines important data tracking systems.”