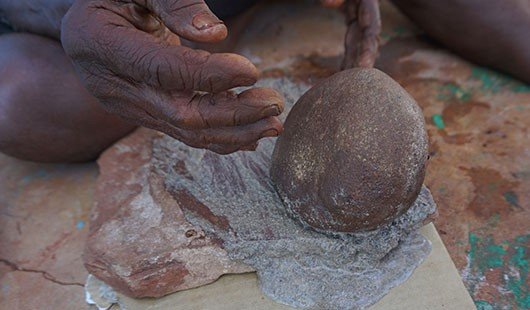 Indigenous wisdom and modern science are helping to bring a highly nutritious seed to the world’s attention.

University of Queensland ethnobotanist Dr Boyd Wright has been working with the Kiwirrkurra in Western Australia’s Gibson Desert, investigating the seed of the native tree, warrilyu (Eucalyptus pachyphylla).

“This seed has been eaten by the Kiwirrkurra people for generations,” Dr Wright said. “Traditionally, the seeds were ground to a raw paste and eaten as a cold gruel – kind of like a eucalyptus–flavoured porridge. The paste has a smooth nutty flavour, which some people might find unusual. Though, in a modern world dominated by cuisines that are either sweet, salty or sour, the distinctive flavour of warrilyu seed could be a really interesting culinary addition.”

Researchers interviewed nine Aboriginal people from the Kiwirrkurra community, including Yalti and Yukultji, two of the study’s co-authors from a family known as the Pintupi Nine, who made first contact with the outside world in 1984.

Dr Wright said that while the skills required to harvest and process the seeds were slowly being lost,   warrilyu seed was set for a comeback, thanks to some impressive nutritional qualities.

“It’s truly remarkable – it has the highest levels of magnesium that I’ve ever seen in a seed, it’s extremely dense in calories and its fatty acid profile is also rather impressive,” he said. “When early explorers first encountered the Gibson Desert Aborigines they remarked on their outstanding physical condition, their good humour and their overall satisfaction with life in a seemingly inhospitable environment. It’s just one of the many highly nutritious foods that Gibson Desert peoples have survived on for many thousands of years. And warrilyu seeds are an incredibly robust food source – historically they’ve been an important drought food, as the gumnuts are held on the trees for very long periods.”

Dr Wright and his colleagues hope the seed’s health benefits can be reintroduced into Indigenous communities and promoted to the wider world.

“We’d love to see more use of native Australian seeds as foods in rural and urban Australia, and across the globe,” Dr Wright said. “Many people in the world are now afflicted by extremely high rates of ‘lifestyle’ diseases such as diabetes, hypertension and obesity. These diseases were virtually non-existent in traditional hunter-gatherer societies and their contemporary prevalence relates to changed dietary circumstances and lack of exercise. We feel that, by promoting native seed consumption domestically, we could increase exercise levels – as collecting warrilyu seeds is a very active process – and dietary quality would improve. Additionally, for Indigenous Australians, regular participation in native seed gathering by young people with old people would help retain important traditional knowledge that’s on the verge of being lost forever.”

The research is published in Economic Botany.