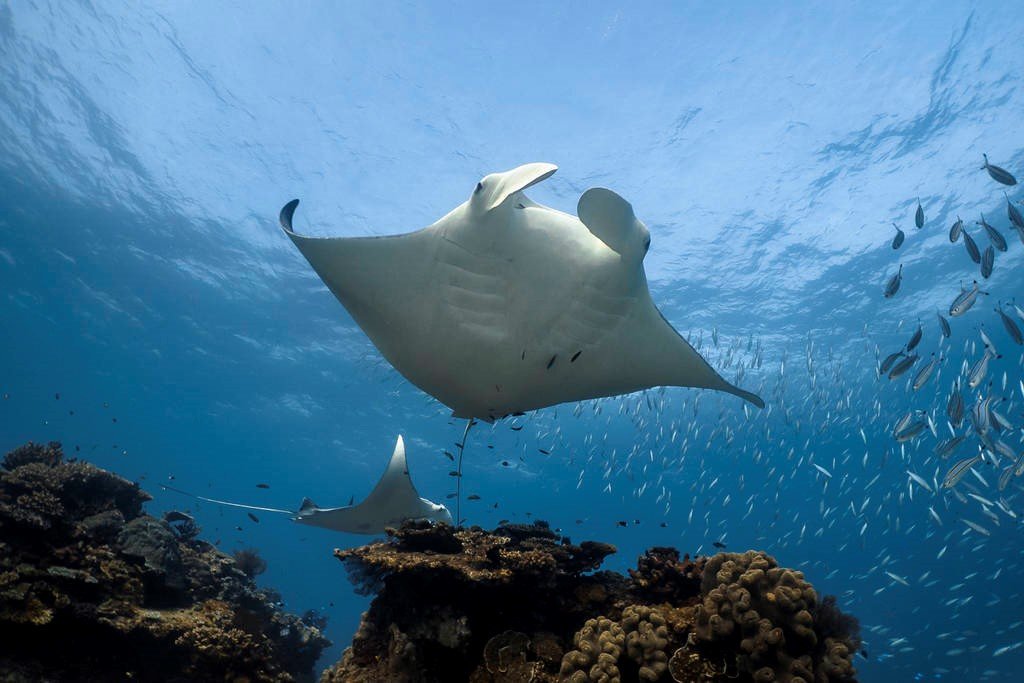 The study, led by University of Queensland PhD candidate Amelia Armstrong, is the first step towards understanding the connectivity of reef manta ray populations in Australia.

“Prior to this study, official reef manta ray distribution maps showed the species as absent from Australia’s northern coastline between the east and west coasts,” she said. “We thought this gap was probably due to a lack of information rather than a true absence, given reef manta rays’ preference for warm, shallow waters. It can be challenging to find confirmed sightings of manta rays in Australia’s north as the coastline is vast and sparsely populated. The threat of crocodiles puts people off the sorts of in-water activities enjoyed along the east and west Australian coasts where our research group, Project Manta, receives plenty of sighting information.”

Ms Armstrong said the team was not entirely surprised to find reef manta rays in Australia’s north, but they were surprised at the overall number of records, and how much information was on fishing and travel blogs.

“You can’t properly manage or monitor a species if you don’t know where it occurs, so that is the gap we’ve addressed for reef manta rays in Australia,” Ms Armstrong said. “The latest International Union for Conservation of Nature Red list assessment lists the species as ‘vulnerable to extinction’ and suggests reef manta ray populations are declining. In some places declines are up to 90 per cent in the last three generations, likely due to fishing targeting them for use in traditional Chinese medicine.”

The combination of aerial surveys, online sighting reports and images submitted to the Project Manta databases allowed researchers to reassess and map the Australian distribution for two manta ray species.

Researchers were also able to make use of the Northern Territory Government’s dugong monitoring aerial surveys where the presence of other large marine animals had been recorded.

“Dugong monitoring aerial surveys allowed us to fill in sighting gaps for large stretches of remote coastline in the Northern Territory and Gulf of Carpentaria,” Ms Armstrong said.

“People tend to be fascinated by manta rays and want to share the unusual sight of such a large animal swimming past with their family and friends,” Ms Armstrong said. “Photos and videos uploaded to travel blogs, Facebook, Instagram and Youtube were a surprisingly valuable source of sighting information. Overall, we were able to collate an incredible 11,614 records with 378 from aerial surveys, 521 from online reports and the rest from Project Manta’s dedicated photo-ID databases. We’ve been able to confirm a continuous distribution for reef manta rays northwards from Shark Bay in Western Australia and around to Coffs Harbour in New South Wales.”

“Now that we’ve confidently established the presence of reef manta rays throughout Australia’s tropical and sub-tropical coastline, we can begin to look at whether the species distribution comprises a single inter-breeding population or is made up smaller distinct groups,” Ms Armstrong said. “This sort of population-based information will be crucial for effective monitoring and management. In Australia, the species is protected, however we don’t yet have a clear idea of how well connected populations are, or even what their population size trajectories are. Outside of aggregation sites, the species is really tricky to study, and this research is the first step in our ongoing efforts to assess reef manta population trends and movements. Manta rays are a valuable source of tourism income both in Australia and globally, with many tourists visiting places like Ningaloo Reef, Lady Elliot Island or North Stradbroke Island, just to get the chance to see a manta ray for themselves.”

The research has been published in the Journal of Fish Biology.