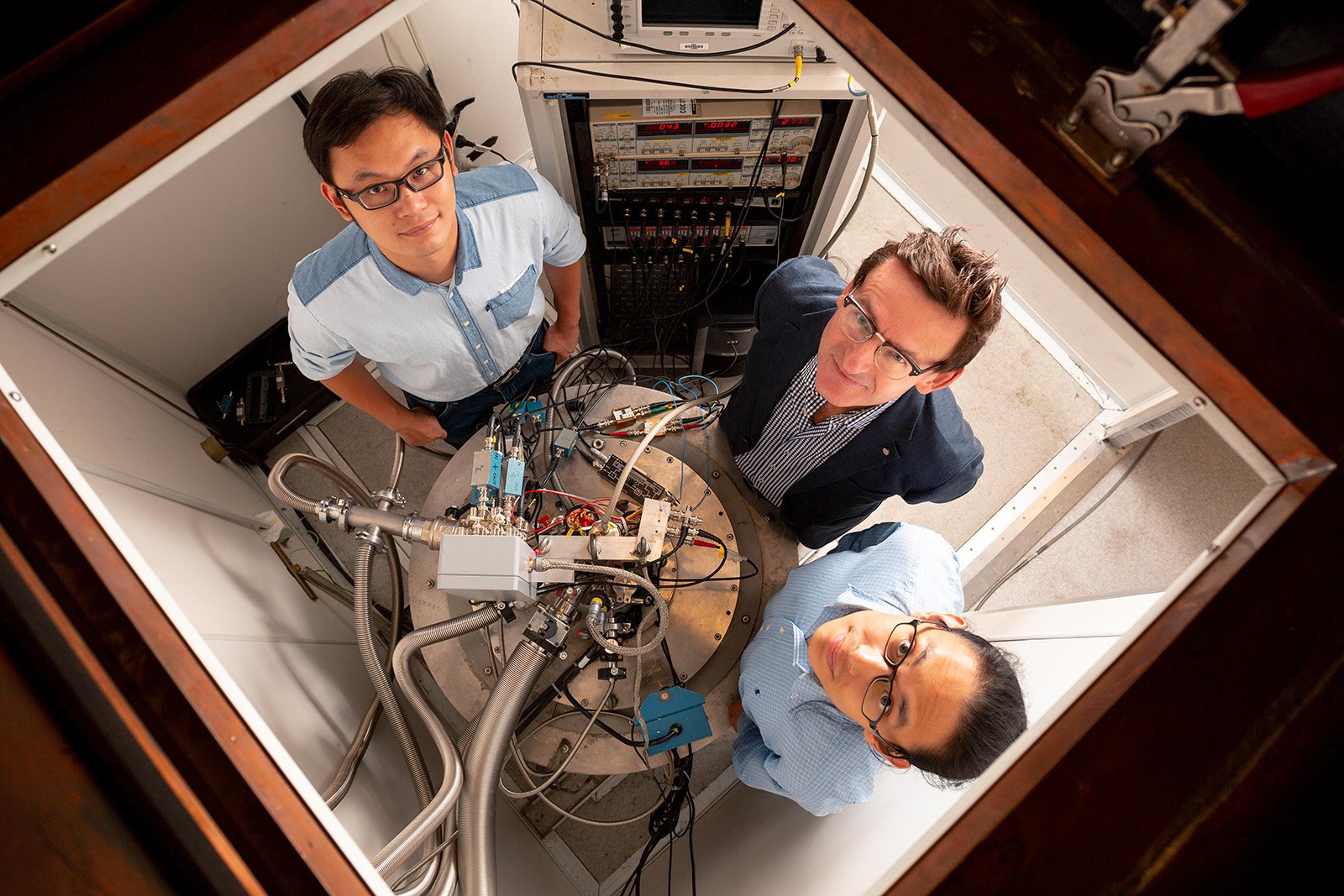 For the first time ever, researchers have measured the fidelity – that is, the accuracy – of two-qubit logic operations in silicon, with highly promising results that will enable scaling up to a full-scale quantum processor.

The research, carried out by Professor Andrew Dzurak’s team in UNSW Engineering, was published today in the world-renowned journal Nature. The experiments were performed by Wister Huang, a final-year PhD student in Electrical Engineering, and Dr Henry Yang, a senior research fellow at UNSW.

“Once you’ve got those, you can perform any computation you want – but the accuracy of both operations needs to be very high.”

In 2015 Dzurak’s team was the first to build a quantum logic gate in silicon, making calculations between two qubits of information possible – and thereby clearing a crucial hurdle to making silicon quantum computers a reality.

A number of groups around the world have since demonstrated two-qubit gates in silicon – but until this landmark paper today, the true accuracy of such a two-qubit gate was unknown.

“Fidelity is a critical parameter which determines how viable a qubit technology is – you can only tap into the tremendous power of quantum computing if the qubit operations are near perfect, with only tiny errors allowed,” Dr Yang says.

In this study, the team implemented and performed Clifford-based fidelity benchmarking – a technique that can assess qubit accuracy across all technology platforms – demonstrating an average two-qubit gate fidelity of 98%.

“We achieved such a high fidelity by characterising and mitigating primary error sources, thus improving gate fidelities to the point where randomised benchmarking sequences of significant length – more than 50 gate operations – could be performed on our two-qubit device,” says Mr Huang, the lead author on the paper.

Quantum computers will have a wide range of important applications in the future thanks to their ability to perform far more complex calculations at much greater speeds, including solving problems that are simply beyond the ability of today’s computers.

“But for most of those important applications, millions of qubits will be needed, and you’re going to have to correct quantum errors, even when they’re small,” Professor Dzurak says.

“For error correction to be possible, the qubits themselves have to be very accurate in the first place – so it’s crucial to assess their fidelity.”

“The more accurate your qubits, the fewer you need – and therefore, the sooner we can ramp up the engineering and manufacturing to realise a full-scale quantum computer.”

Silicon confirmed as the way to go

The researchers say the study is further proof that silicon as a technology platform is ideal for scaling up to the large numbers of qubits needed for universal quantum computing. Given that silicon has been at the heart of the global computer industry for almost 60 years, its properties are already well understood and existing silicon chip production facilities can readily adapt to the technology.

“If our fidelity value had been too low, it would have meant serious problems for the future of silicon quantum computing. The fact that it is near 99% puts it in the ballpark we need, and there are excellent prospects for further improvement. Our results immediately show, as we predicted, that silicon is a viable platform for full-scale quantum computing,” Professor Dzurak says.

“We think that we’ll achieve significantly higher fidelities in the near future, opening the path to full- scale, fault-tolerant quantum computation. We’re now on the verge of a two-qubit accuracy that’s high enough for quantum error correction.”

In another paper – recently published in Nature Electronics and featured on its cover – on which Dr Yang is lead author, the same team also achieved the record for the world’s most accurate 1-qubit gate in a silicon quantum dot, with a remarkable fidelity of 99.96%.

“Besides the natural advantages of silicon qubits, one key reason we’ve been able to achieve such impressive results is because of the fantastic team we have here at UNSW. My student Wister and Dr Yang are both incredibly talented. They personally conceived the complex protocols required for this benchmarking experiment,” says Professor Dzurak.

UNSW Dean of Engineering, Professor Mark Hoffman, says the breakthrough is yet another piece of proof that this world-leading team are in the process of taking quantum computing across the threshold from the theoretical to the real.

“Quantum computing is this century’s space race – and Sydney is leading the charge,” Professor Hoffman says.

“This milestone is another step towards realising a large-scale quantum computer – and it reinforces the fact that silicon is an extremely attractive approach that we believe will get UNSW there first.”

Spin qubits based on silicon CMOS technology – the specific method developed by Professor Dzurak’s group – hold great promise for quantum computing because of their long coherence times and the potential to leverage existing integrated circuit technology to manufacture the large numbers of qubits needed for practical applications.

“Our latest result brings us closer to commercialising this technology – my group is all about building a quantum chip that can be used for real-world applications,” Professor Dzurak says.

A full-scale quantum processor would have major applications in the finance, security and healthcare sectors – it would help identify and develop new medicines by greatly accelerating the computer- aided design of pharmaceutical compounds, it could contribute to developing new, lighter and stronger materials spanning consumer electronics to aircraft, and faster information searching through large databases.