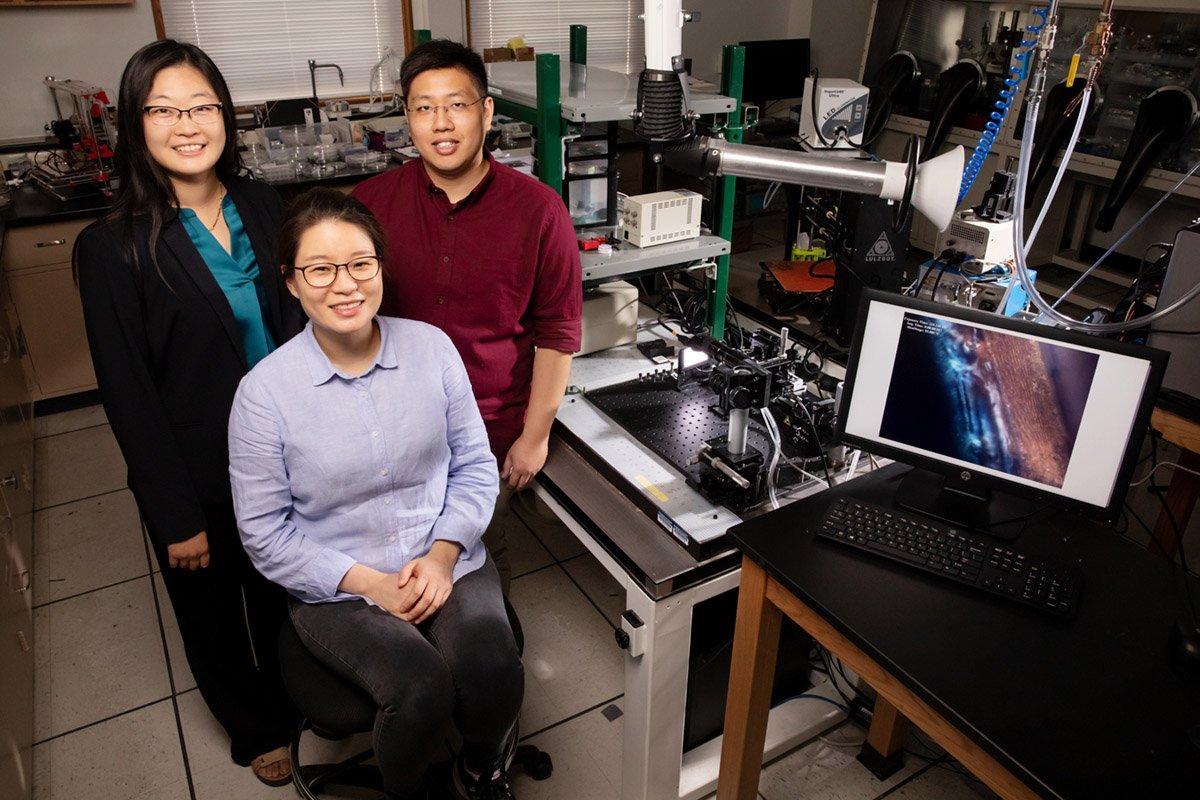 Researchers have found a way to use polymer printing to stretch and flatten twisted molecules so that they conduct electricity better. A team led by chemical and biomolecular engineers from the University of Illinois report their findings in the journal Science Advances.

Conjugated polymers are formed by the union of electron-rich molecules along a backbone of alternating single and double chemical bonds. The conjunction allows electricity to travel very quickly through a polymer, making it highly desirable for use in electrical and optical applications. This mode of transporting charges works so well that conjugated polymers are now poised to compete with silicon materials, the researchers said.

However, these polymers tend to contort into twisted spirals when they join, severely impeding charge transport.

“The flatness or planarity of a conjugated polymer plays a large role in its ability to conduct electricity,” said chemical and biomolecular engineering professor Ying Diao, who led the study. “Even a slight twist of the backbone can substantially hinder the ability of the electrons to delocalize and flow.”

It is possible to flatten conjugated polymers by applying an enormous amount of pressure or by manipulating their molecular structure, but both techniques are very labor-intensive, Diao said.

“There really is no easy way to do this.”

Postdoctoral researcher Kyung Sun Park and graduate student Justin Kwok noticed something while running printing experiments and flow simulations in Diao’s lab. Polymers go through two distinct phases of flow during printing: The first phase occurs when capillary action pulls on the polymer ink as it begins to evaporate, and the second phase is the result of the forces imposed by the printing blades and substrate, the researchers said.

“Park and Kwok uncovered another phase that occurs during printing in which the polymers appear to have vastly different properties,” Diao said. “This third phase occurs in between the two already-defined phases, and shows the polymers being stretched into planar shapes.”

Not only are the polymers stretched and flattened in this third phase, but they also remain that way after precipitating out of solution, Diao said, making it possible to fine-tune printer settings to produce conjugated polymers for use in new, faster biomedical devices and flexible electronics.

“We are discovering a whole zoo of new polymer phases, all sensitive to the forces that take place during the printing process,” Diao said. “We envision that these unexplored equilibria and flow-induced phases will ultimately translate into new conjugated polymers with exciting optoelectronic properties.”