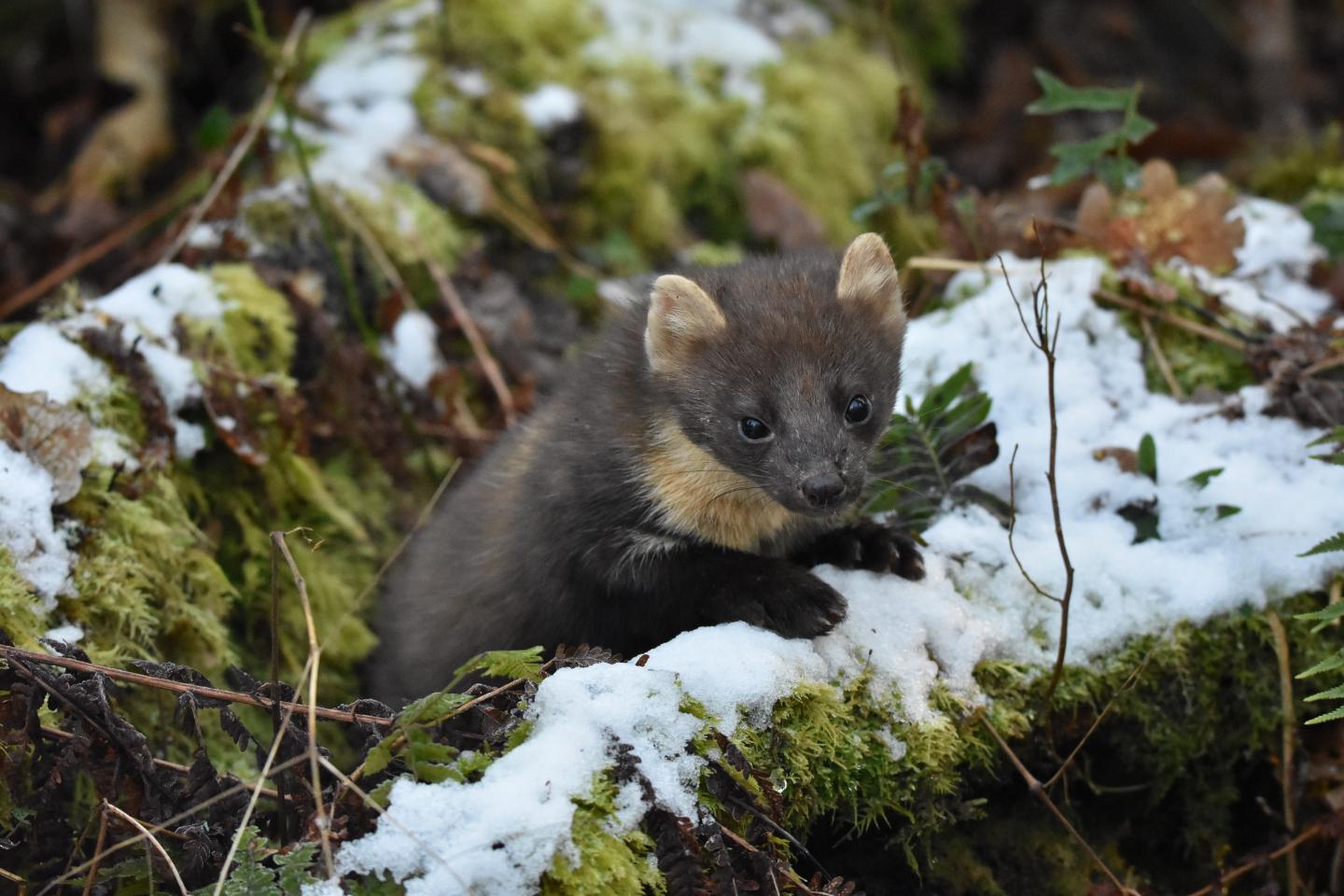 The recovery of pine marten in Ireland and Britain is reversing native red squirrel replacement by invasive grey squirrels, according to new research presented at the British Ecological Society’s annual meeting in Belfast today.

Historically, persecution of pine marten and loss of their preferred habitat led to severe declines across Ireland and Britain. In Northern Ireland, small, remnant populations were all that remained, but today, the species is recovering, and this comeback may help ensure the long-term future of the red squirrel in Ireland.

Twining said, “The ability of the pine marten to control the grey squirrel and help red squirrel recovery in Ireland and Britain is limited by three things; its ongoing recovery, the lack of forest cover on the island and the presence of urban areas. Twining and co-authors suggest that grey squirrels will persist in the latter as results show pine marten are forest specialists and avoid urban areas.

Although the red squirrel population is increasing in Northern Ireland, the researchers warn that “unless the issue of control within populated areas is addressed, we risk creating a situation where marten-savvy grey squirrels could recolonise the wider landscape in the future”.

Consequently, as the pine marten “does not occupy urban areas anywhere within its European range, it is not likely to be the sole solution to the invasive grey squirrel” said Twining.

If pine marten are to extend their positive impact on red squirrels, issues impeding pine marten recovery need to be addressed. At present, Ireland and Britain are among the least forested countries in Europe with only 11% and 13% of forest cover respectively. The pine martens’ sphere of influence is limited to its forested havens. Increasing forest cover, would lead to concurrent increases in the pine marten’s ability to control grey squirrels and aid in recovery of the red squirrels.

Recovery of the pine marten could be further compounded by the potential of illegal persecution by a human population not used to its presence. Conflict could occur when pine martens predate on poultry or den in attics for example. Pine martens are still at the early stages of recovery, and human persecution remains the greatest threat to the species.

The researchers used presence-absence data to calculate the likelihood of a species occurring in a location. To collect the data, citizen scientists deployed a camera trap at sites with a minimum of 5 ha forest cover for one week at randomly selected locations. The study used data from 332 sites across Northern Ireland covering all sizes and shapes of woodlands from inner city Belfast to the Mournes, from the Glens of Antrim in the north to the Ring of Gullion in the south.

Multi-species models were used to estimate the probability of occupancy of arboreal mammals including the grey squirrels, red squirrels and pine martens throughout Northern Ireland. These models consider the effects of the interactions between species and their habitats. They combine information on the occurrence of an animal from the camera trap records with local habitat and environmental data accounting for imperfect detection.