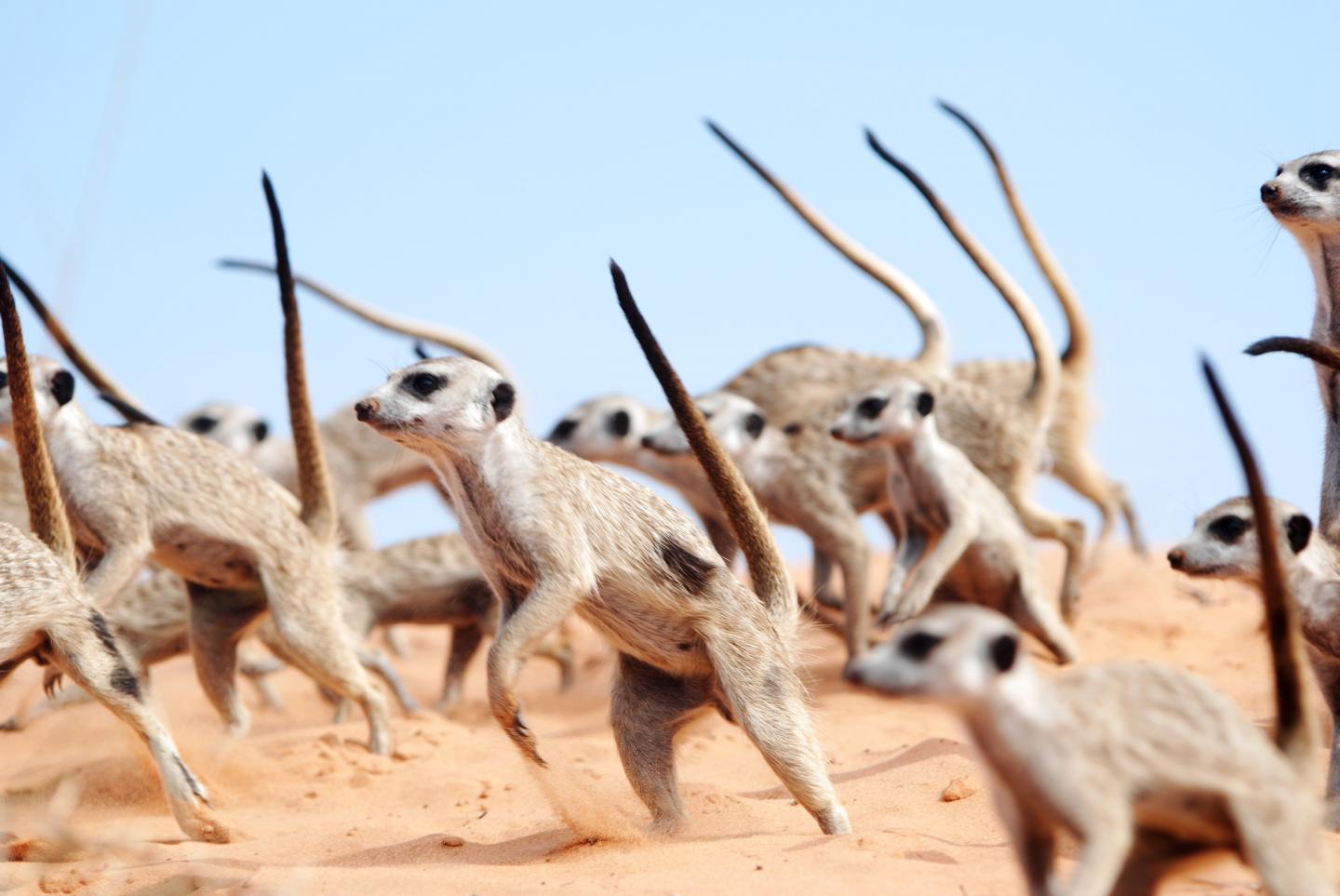 Meerkat clans perform a ‘war dance’ to frighten opponents and protect their territory, according to a new UCL and University of Cambridge study.

Published in Proceedings of the Royal Society B, this is the first empirical study to reveal intergroup aggression.

The study reveals that in more than half of interactions (64.7%) meerkat clans’ exhibit aggression by either chasing or doing a ‘war dance’, where a meerkat displays an erect tail and puffed-out fur, possibly to make the group appear larger than its size.

Lead author and evolutionary anthropologist Dr Mark Dyble (UCL Anthropology and formerly of University of Cambridge), said: “We show that interactions between meerkat groups are never tolerant, that the majority involve some form of aggression and that a minority result in physical violence. However, even when interactions between meerkat groups do not result in physical violence, they may have territorial consequences, with losing groups moving to sleeping burrows closer to the centre of their territory and winning groups moving to burrows further from the centre of their territory.”

Meerkats live in stable and highly social groups and within these clans there are high levels of co-operation. Each clan is made up of about 20 members and there is a dominant male and a dominant female who monopolise reproduction, producing more than 80% of offspring born in the group.

Like many carnivores, meerkats are territorial and deposit faeces and scent marks at sites both within their territories and at important locations on territorial boundaries. Clans work together to defend territories and regularly have aggressive interactions with neighbours.

In the vast majority of cases (86%), aggressions ended with one of the two groups retreating before direct physical contact. However, in a few cases (9%) those interactions resulted in fighting with at least one meerkat killed.

For the study, data was collected between January 2008 and February 2019 as part of a long-term behavioural study of wild meerkats in the Kalahari Meerkat Project, South Africa. The Kalahari desert is a semi-arid environment where rainfall and temperature vary dramatically.

Dr Dyble concluded: “If we want to fully understand violence in human societies, we need to understand its evolutionary roots. This requires us to understand why other animal groups fight, and what do they gain or lose from doing so. We show that although meerkat intergroup aggression only occasionally results in an individual being killed, winning fights with neighbouring groups is critical to maintaining a territory. In the harsh semi-desert of the Kalahari, a good quality territory is critical to a group’s survival and long-term success.”