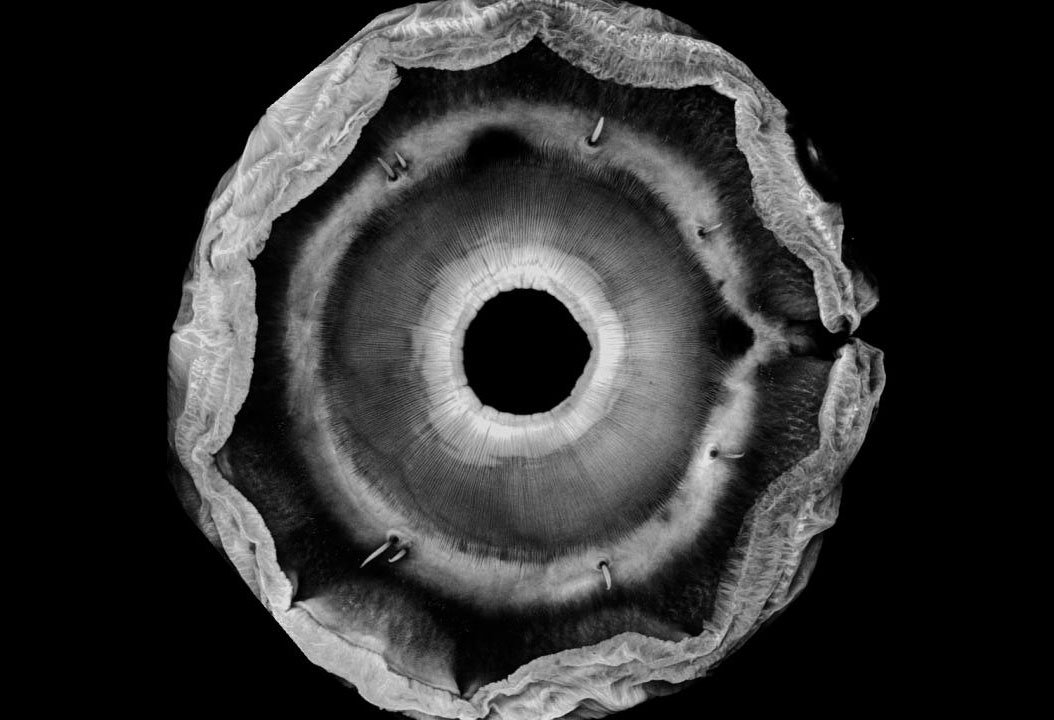 The aquatic larvae of the net-winged midge have the unique ability to move around at ease on rocks in torrential rivers using super-strong suction organs. Powerful modern imaging techniques have now revealed the structure of these organs in intricate detail, providing an insight into how they work so reliably. The findings, reported in the journal BMC Zoology, may inform the development of better man-made suction cups that perform well on a variety of surfaces.

The larvae have the ability to quickly detach and reattach to underwater rocks in torrential alpine rivers that can flow as fast as three metres per second. Their highly specialised suction organs are so strong that only forces over 600 times their body weight can detach them. Being in such fast flowing water puts them out of harm’s way, since competitors or predators are unlikely to survive in this challenging environment.

“The force of the river water where the larvae live is absolutely enormous, and they use their suction organs to attach themselves with incredible strength. If they let go they’re instantly swept away,” said Victor Kang, a PhD student in the University of Cambridge’s Department of Zoology and first author of the paper. “They aren’t bothered at all by the extreme water speeds – we see them feeding and moving around in all directions.”

The researchers found that a central piston, controlled by specific muscles, is used to create the suction and enable each larva to form a very tight seal with the surface of the rock. A dense array of tiny hairs come into contact with the rock surface, helping to keep the larva in place. When it needs to move, other muscles control a tiny slit on the suction disc, pulling the disc open to allow the suction organ to detach. This is the first time such an active detachment mechanism has been seen in any biological system.

The work focused on two species of the larvae – Liponeura cinerascens and Liponeura cordata – found in the fastest flowing parts of alpine rivers near Innsbruck, Austria. Despite only wading into the river up to their knees, the researchers found it difficult to stay upright. The larvae they found there were grazing on the underwater rocks, apparently oblivious to the torrents bearing down on them.

“These natural structures have been optimised through millions of years of evolution. We want to learn from them to create better engineered products,” said Dr Walter Federle, an expert in Comparative Biomechanics at the University of Cambridge who led the study.

By collaborating with colleagues at the Institute of New Materials, Saarbrücken, Germany, the researchers are using their findings to develop ‘bio-inspired’ suction cups. Current artificial suction cups only work well on smooth, clean surfaces, like a car windscreen or inside a clean-room facility. The aquatic net-winged midge larvae live on rough, dirty surfaces yet can walk around with ease. Such highly reliable controlled attachment and detachment has many potential industrial applications.

“By understanding how the larvae’s suction organs work, we now envisage a whole host of exciting uses for engineered suction cups,” said Federle. “There could be medical applications, for example allowing surgeons to move around delicate tissues, or industrial applications like berry picking machines, where suction cups could pick the fruit without crushing them.”

The aquatic larvae of net-winged midges have fascinated insect specialists for over a century. Their suction organs have the highest attachment strength ever recorded in insects. Using scanning electron microscopy, confocal laser scanning microscopy, and X-ray computed micro-tomography (micro-CT), this study has revealed the internal structure of the suction organs in three dimensions and provided new insights into their function.