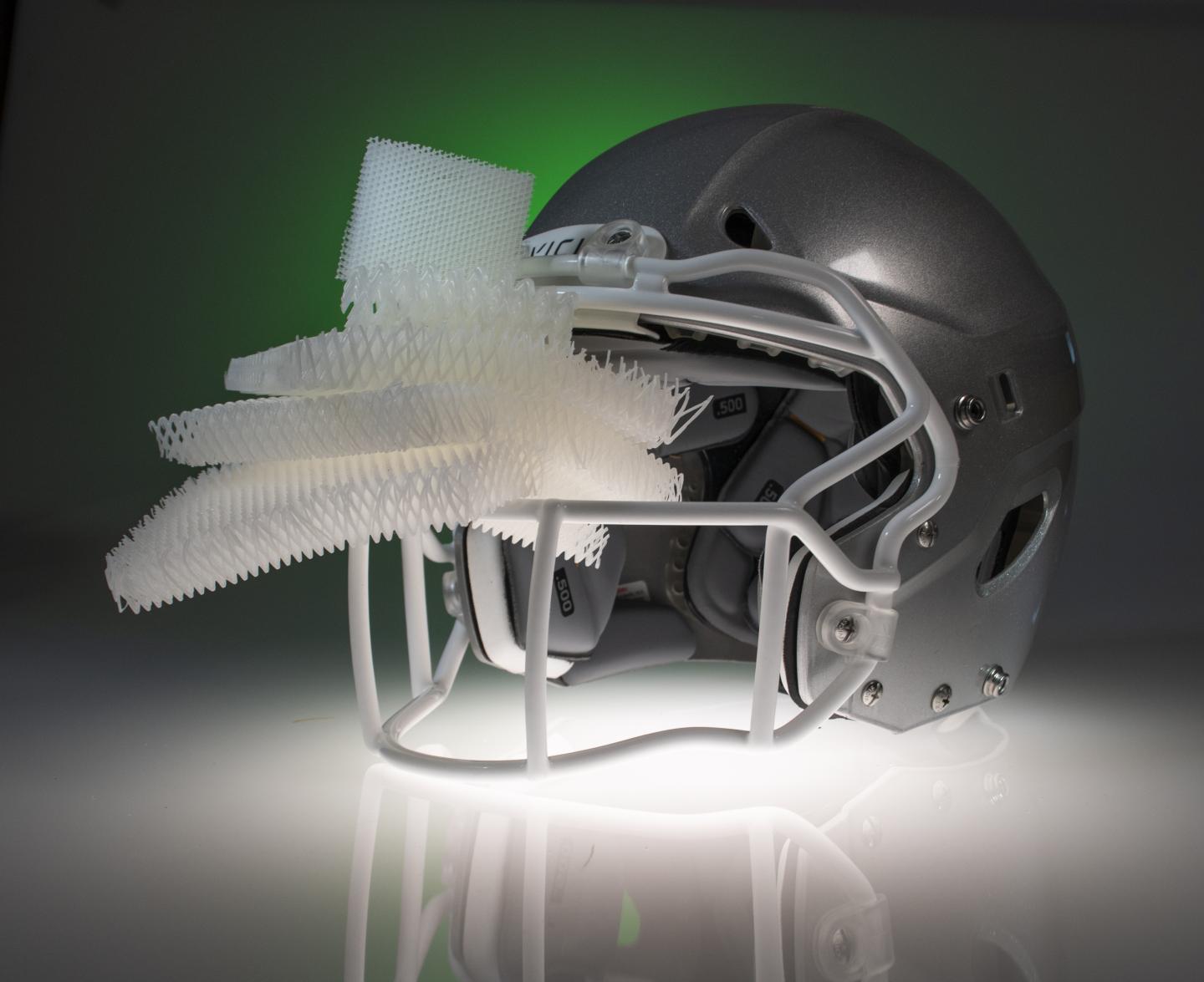 Scientists at the University of California Santa Barbara, HRL Laboratories LLC, and the U.S. Army Research Laboratory have developed elastic microlattice pads that can withstand both single hits and a series of impacts better than existing state-of-the-art foams used in football helmets. Their research, publishing November 27 in the journal Matter, suggests that the material may pave the way for helmets that better protect football players and other athletes from brain injuries caused by repeated head hits.

Helmets used in both combat and American football require impact-absorbing materials that protect against ongoing impacts, but it remains difficult to design materials that remain effective over time without compromising on volume, mass, or cost. Although helmet foams have evolved in the past decades, improvements have been relatively marginal.

“Our technology could revolutionize football, batting, bicycle, and motorcycle helmets, making them better at protecting the wearer and much easier to have on your head due to the increased airflow,” says Eric Clough, a researcher at HRL Laboratories, a materials science doctoral student at the University of California, Santa Barbara, and the lead scientist on the study.

The photopolymer-based microlattice material shares a resemblance to the Eiffel Tower’s famous wrought-iron design: it is sturdy but allows air to pass through, a property that would keep athletes’ heads cooler than existing helmets. This structure also makes the material highly adjustable, so engineers can easily tailor it to absorb different levels and types of shock by tweaking its components.

In order to test how well three different variations of the microlattice material absorb impacts compared to traditional foams, the researchers first used a double anvil fixture to simulate impacts similar to those that would strike a pad situated within a helmet, allowing them to measure the response of the material alone without accounting for the helmet’s shape and other properties. Next, they adapted the material into helmet pads and tested them according to U.S. Army Advanced Combat Helmet test specifications, observing their ability to withstand multiple consecutive blows.

The team’s best performing microlattice material absorbed up to 27% more energy from a single impact than the current most effective expanded polystyrene foam and absorbed energy up to 48% more energy efficiently compared to the top vinyl nitrile foam during repeated impacts. The material also outperformed competing microlattice designs, absorbing nearly 14% more energy from a single hit and staying intact to absorb the next round of impacts instead of irreversibly buckling after one hit.

“A noticeable percentage of improvement in impact absorption was something we were hoping for, but the actual numbers were better than we expected,” says Clough. “Our testing shows that the pads work better than anything on the current market.”

The sports technology company VICIS has licensed the microlattice pad technology through HRL, and the researchers next plan to research the material’s use in military head protection. However, Clough cautions that the material is not a “magic bullet” capable of shielding the user from all head injuries.

“Wearers of helmets with our padding can enjoy the benefits but should never assume they are completely protected from injury or look to test the limits of the product by possibly endangering themselves unnecessarily,” he says. “Even a great helmet can’t always protect you from every injury all the time.”