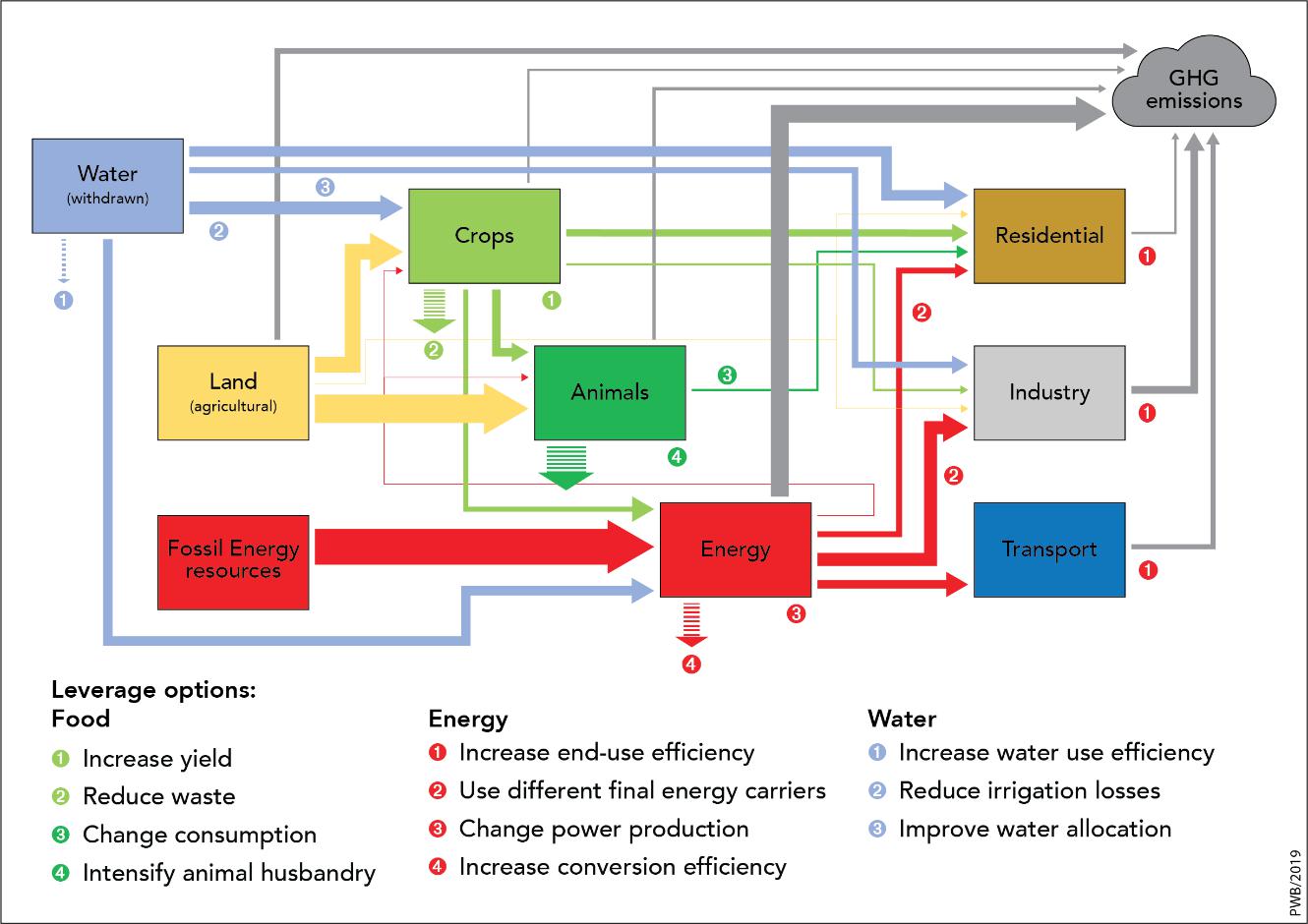 There is strong interdependency between the use of food, energy and water resources and it is closely linked to environmental challenges, such as climate change and loss of biodiversity. These linkages are expected to become even more important with an increasing demand for these resources. In a new set of scenarios and visualisations, these relationships are explored in more detail for no-policy cases and for the implementation of various response options, such as dietary changes and stringent climate policy.

In the recent scientific literature, the link between the use of food, energy and water resources and the relation to environmental problems is emphasised as critically important for sustainable development strategies (the so-called food–energy–water nexus). Most of this literature, however, is either focused on a local scale or is rather qualitative. In a new paper published in Nature Sustainability, a group of researchers from PBL Netherlands Environmental Assessment Agency, Utrecht University and Wageningen University use the IMAGE model to look at quantitative scenarios on the global consumption of food, water and energy and how these resources depend on each other.

If no new policies are adopted, global consumption of food, energy and water is expected to increase significantly, i.e. by 20% to 60%. This is likely to lead to further intensification of the linkages between these resources but also to a further expansion of the agricultural area, and the exacerbation of climate change and related environmental problems, such as water scarcity.

The figures presented in the paper (called Sankey diagrams) offer a visualisation of the complex conversion pathways (see also Figure 1). The consumption of those resources, clearly, is closely linked. For instance, water is used in crop production and in the production of energy. Energy, in turn, is mostly used in end-use sectors, but also is an input in agriculture. The Sankey diagrams also show key interventions to improve resource efficiency from a system perspective, such as animal husbandry.

Inefficiencies, currently, can be reduced by system interventions, such as a shift towards less meat-intensive diets, reducing food waste, increasing yields and introducing climate policy. Detlef van Vuuren, leader of the research team, explained that a combination of these response options is a prerequisite to meeting the challenges of the increasing agricultural production that is needed to feed 9 billion people, while reducing pressure on biodiversity, mitigating climate change and maintaining resource quality. Such a strategy could, for instance, reduce global land use to below the 2010 level and also lead to less water consumption than under the reference scenario. Current negotiations on international environmental policy play a key role in this. The COP25 in Madrid, for instance, aims to strengthen climate policy – which needs to be done with the linkages with other nexus issues in mind.