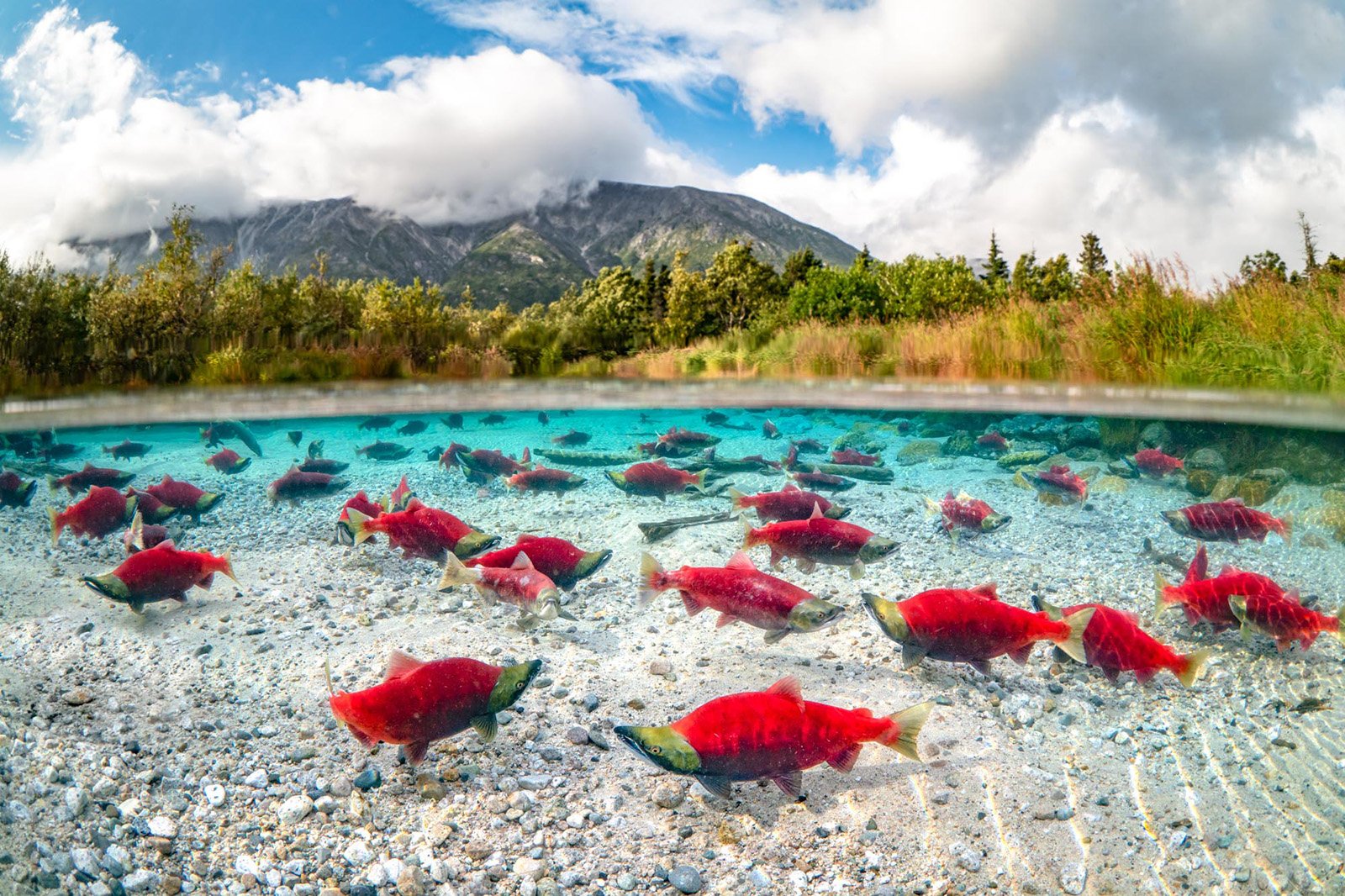 Chemical signatures imprinted on tiny stones that form inside the ears of fish show that two of Alaska’s most productive salmon populations, and the fisheries they support, depend on the entire watershed.

Sockeye and Chinook salmon born in the Nushagak River and its network of streams and lakes in southwest Alaska use the whole basin as youngsters when searching for the best places to find prey, shelter and safety from predators. From birth until the fish migrate to the ocean a year later is a critical period for young salmon to eat and grow.

By analyzing each fish’s ear stone — called an otolith — scientists have found that different parts of the watershed are hot spots for salmon production and growth, and these favorable locations change year to year depending on how climate conditions interact with local landscape features like topography to affect the value of habitats.

The new study, led by the University of Washington, appears May 24 in Science.

“We found that the areas where fish are born and grow flicker on and off each year in terms of productivity,” said lead author Sean Brennan, a postdoctoral researcher at the UW School of Aquatic and Fishery Sciences.

“Habitat conditions aren’t static, and optimal places shift around. If you want to stabilize fish production over the years, the only strategy is to keep all of the options on the table.”

The Nushagak River watershed is the largest river basin in the Alaska’s Bristol Bay region, which supports the biggest sockeye salmon fishery in the world and provides about 50 percent of wild sockeye globally. It is also known for its large run of Chinook salmon.

The new study coincides with renewed efforts to gain permits for the Pebble Mine, a proposed copper and gold excavation near the headwaters of the Nushagak River. The U.S. Army Corps of Engineers’ draft environmental analysis considered only two or three years of fish counts in specific locations in proximity to the proposed mine. It states that fish habitat lost to the mine could be recreated elsewhere.

But the new Science study shows that key salmon habitat shifts year to year, and how productive one area is for a short period might not represent its overall value to the fish population or larger ecosystem.

“The overall system is more than just the sum of its parts, and small pieces of habitat can be disproportionately important,” said senior author Daniel Schindler, a professor at the UW School of Aquatic and Fishery Sciences. “The arrows point to the need to protect or restore at the entire basin scale if we want rivers to continue to function as they should in nature.”

The research team reconstructed the likely geographic locations of nearly 1,400 adult salmon, from their birth in a Nushagak stream until they migrated to the ocean. By looking at each fish’s otolith – which accumulates layers as the animal grows – researchers could tell where the fish lived by matching the chemical signatures imprinted on each “growth ring” of the otolith with the chemical signatures of the water in which they swam.

These chemical signatures come from isotopes of the trace element strontium, found in bedrock. Strontium’s isotopic makeup varies geographically from one tributary to another, particularly in the Nushagak basin, making it easy to tell where and when a fish spent time.

“The otolith is this natural archive that basically provides a transcript of how a fish moved downstream through the river network,” Schindler said. “Essentially, we’re sampling the entire watershed and letting the fish tell us where the habitat conditions were most productive in that year.”

The researchers noticed significant patterns when comparing where fish lived year to year. For example, in 2011 the northwest portion of the watershed in the Upper Nushagak was highly productive for Chinook, meaning more fish were born and gained body mass in that region. But by 2014 and 2015, the population had shifted eastward to utilize resources in the Mulchatna River and its tributaries — several that are downstream of the Pebble deposit.

Similar types of shifts have been documented in a number of land- and water-based animal populations, but this is the first study to show the phenomenon at a watershed-wide scale, the authors said.

“The big thing we show is these types of dynamics are critical for stabilizing biological production through time. When you have a range of habitat available, the total production from the system tends to be more stable, reliable and resilient to environmental change,” Brennan said.

The public comment period for the Pebble Mine draft environmental impact statement recently was extended to June 29 to provide more time for groups to weigh in on the 1,400-page document.

The authors of the new study said they hope it can be used to inform the scientific analysis of the proposed mine’s impact on fish.

“Results like those we’re presenting in this paper hopefully will get people to think about what they stand to lose by starting to develop and eliminate habitat in places like the Nushagak River,” Schindler said. “The Pebble Mine environmental impact statement, which is supposed to be a mature, state-of-the-science assessment of risks, really does a poor job of assessing risks of this specific project.”