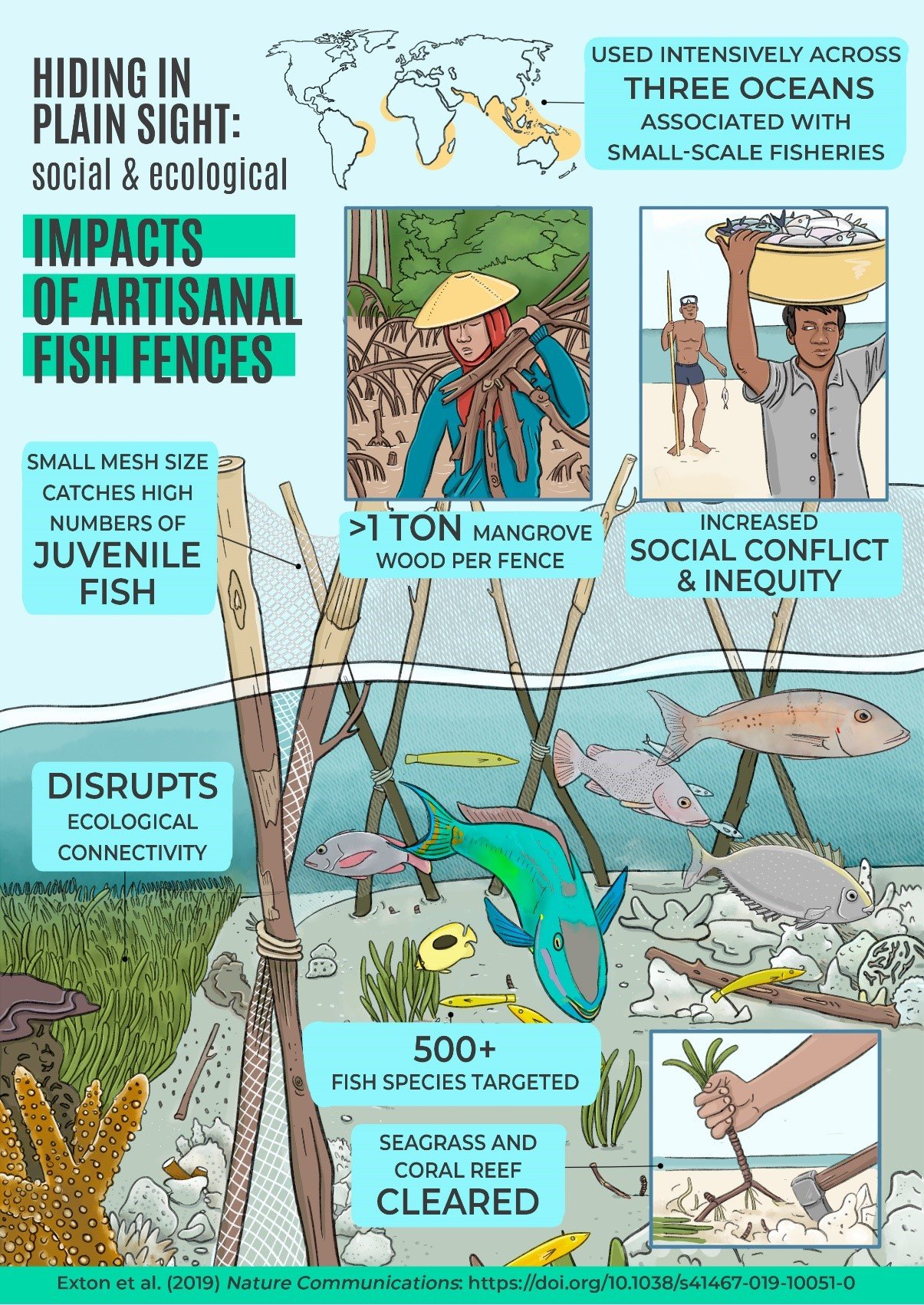 Research published this week in the journal Nature Communications reveals that the use of ‘fish fences’, a common type of traditional fishing gear, is widespread throughout the tropics. The research incorporated ecological, social and remote sensing methods to uncover the findings. Dr. Richard Unsworth from Swansea University in the UK explained that these fences, which can often be up to hundreds of metres in size, are placed semi-permanently in shallow habitats very close to the shore where they catch everything that travels with the tidal water movements.  Because they are unselective, they catch more than 500 species, many as babies or which are of conservation concern. Unsworth said, “it’s not surprising that these fisheries are having a disastrous impact upon tropical marine ecosystems such as seagrass meadows, mangroves and coral reefs.”

Fish fences are so large they can be seen from space and the researchers used Google Earth to demonstrate this type of fishing is prevalent across three oceans. Fisheries management often targets commercial and industrial fishing gears, and allows for the use of more traditional fishing gears that are often referred to as ‘sustainable’.  This work challenges that assumption.

Dr. Gabby Ahmadia of the World Wildlife Fund and co-author on the study says that, “this study demonstrates the widespread impact of fish fences, a traditional fishing gear often used in some of the world’s poorest countries where reliance on marine resources are high. This study revealed that some of these traditional fishing gears have a much higher impact that we initially thought, and we need to work with communities and local governments to identify solutions that can support traditional practice, but also promote sustainable fisheries and provide equitable benefits for people.”

Dr. Dan Exton of Operation Wallacea and lead researcher on the study said, “Fisheries management is not just about how many fish are being caught, it’s about how those fish are being removed, and understanding the far-reaching impacts of a single fishing technique. Governments, NGOs and communities need to direct management efforts toward fishing techniques that are having the most harmful impacts. This could help with sustainability, and even increase short-term resilience to climate change.”

These findings, part of a long term collaboration between Operation Wallacea, Swansea, Essex and Cardiff Universities in the UK, World Wildlife Fund and Cornell University in the US, and Hasanuddin University in Indonesia, will allow conservationists to target fish fences and minimise their far reaching and severe impacts. Imam Musthofa, Marine Director of WWF Indonesia said, “Many fishing gears, including those with traditional origins, have potential negative impacts on the environment. Fisheries must therefore be supported by best management practices to minimise impacts to marine species, ecosystems and the people who depend on them. Governments will need to play a key role in regulating these gear management efforts.”