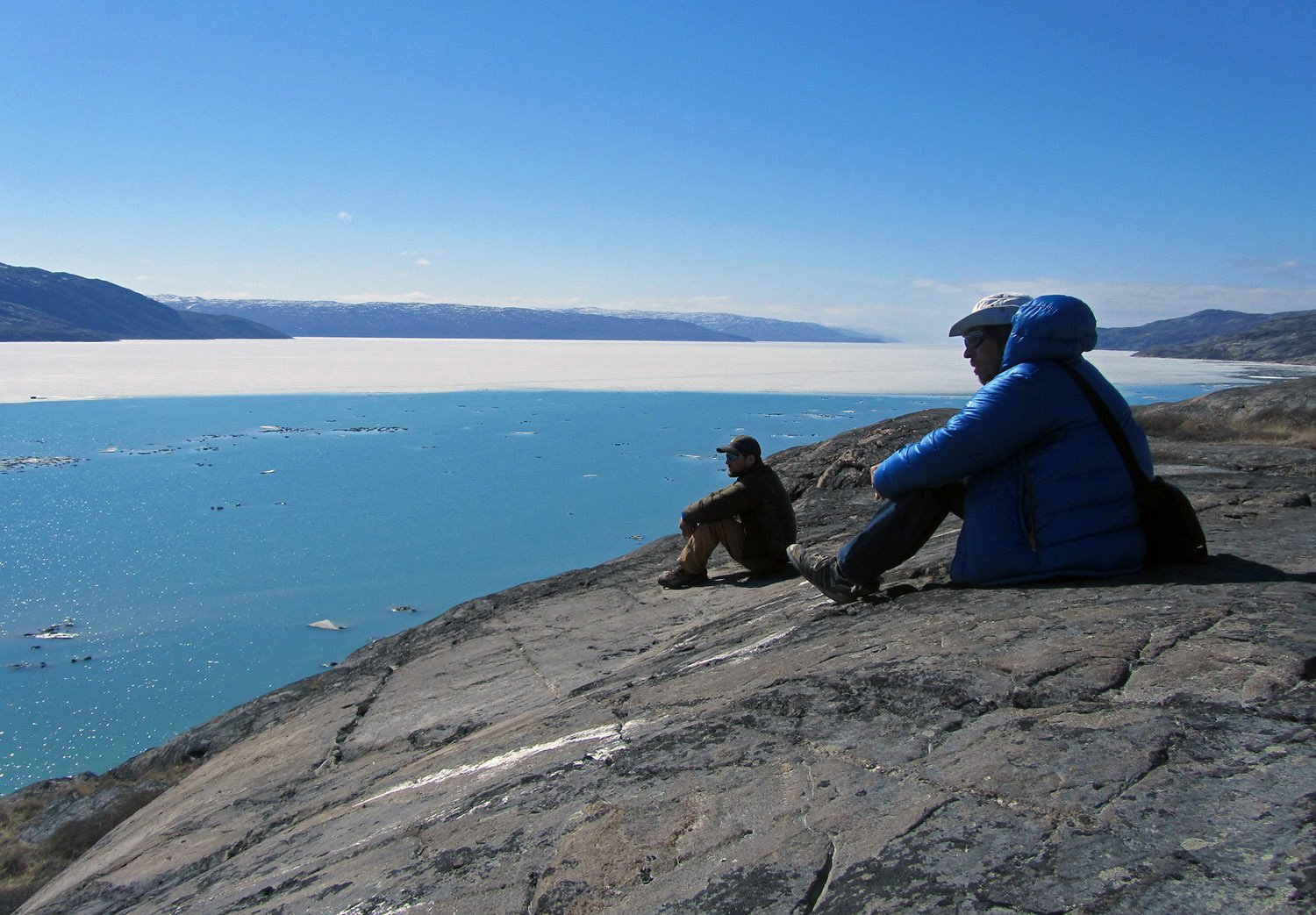 Thick, impenetrable ice slabs are expanding rapidly on the interior of Greenland’s ice sheet, where the ice is normally porous and able to reabsorb meltwater. These slabs are instead sending meltwater spilling into the ocean, according to a new CIRES-led assessment, threatening to increase the country’s contribution to sea level rise by as much as 2.9 inches by 2100.

Although runoff from ice slabs has added less than a millimeter to global sea levels so far, this contribution will grow substantially as ice slabs continue to expand in a warming climate, said Mike MacFerrin, a CIRES and University of Colorado Boulder researcher who led the new study, published today in Nature.

“Even under moderate climate projections, ice slabs could double the size of the runoff zone by 2100,” MacFerrin said. “Under higher emissions scenarios, the runoff zone nearly triples in size.”

In 2000, Greenland’s runoff zone – the region of the ice sheet where runoff contributes to sea level rise – was roughly the size of New Mexico. Between 2001 and 2013, ice slabs expanded the runoff zone by about 65,000 km2 – that’s an average pace of two American football fields a minute. By 2100, as Earth’s temperatures continue to climb and ice slabs continue to grow, the runoff zone could expand by the size of Colorado under a moderate emissions scenario, the team found. That would raise seas by an extra quarter inch to just over an inch (7-33 mm).

Under a higher emissions scenario, with greater release of greenhouse gases, the runoff zone could increase by the size of Texas, according to the new paper, contributing an extra half inch to nearly three inches (17-74 mm) of sea-level rise. The runoff estimates from ice slabs are in addition to other sources of sea-level rise from Greenland, such as calving icebergs.

Greenland’s ice sheet is a complex quilt of frozen textures: melt lakes dot the surface, snow falls each winter, and old compacted snow slowly compresses into glacial ice. Over most of Greenland, the snow only partially melts each summer and later refreezes into thin ice disks or “lenses” just an inch or two thick, nestled within the compacted snow. Normally, meltwater can percolate downward and around ice lenses, refreezing in place without running off to sea.

But as extreme Arctic melting events become more frequent, those delicate ice layers expand and solidify into mammoth, 1- to 16-meter (3- to 50-foot) thick “slabs,” creating an impermeable shell just beneath the surface. Meltwater can no longer percolate down into the ice sheet and instead flows downhill along the ice slabs, eventually into the ocean.

Such melt episodes are increasingly common in Greenland: In July of 2012, snow and ice melted from 97 percent of Greenland’s ice sheet surface, an event not seen in the 33-year satellite record, according to the National Snow and Ice Data Center (NSIDC), part of CIRES and CU Boulder. This spring, which was particularly warm and sunny in Greenland, a record-setting 80 billion tons of Greenland ice melted.

MacFerrin and his colleagues accidentally discovered ice slabs in 2012, when they found large sections of solid ice in ice core samples, instead of the thin ice lenses they expected. They’d never seen anything like it before, MacFerrin said. Since the initial discovery, the team has investigated the ice slabs by driving snowmobiles across southwest Greenland, dragging ground-penetrating radars behind to map the extent of slabs. The scientists also harnessed NASA Icebridge data and climate models to understand how the slabs have expanded in recent decades, and to predict how they may continue to grow.

“As the climate continues to warm, these ice slabs will continue to grow and enhance other meltwater feedbacks,” said Mahsa Moussavi, NSIDC researcher and a coauthor on the paper. “It’s a snowball effect: more melting creates more ice slabs, which create more melting, which, creates again more ice slabs.”

This process fundamentally alters the ice sheet’s present and future hydrology. Arctic feedbacks like this are critical to understand because they show just how much, and how quickly, a warming climate can change Earth’s most vulnerable regions.

“Interestingly, decades ago scientists hypothesized what meltwater in a warming climate could do to Greenland’s snow layers, based on measurements and theory.” said Horst Machguth, a researcher at the University of Fribourg, Switzerland, and second author on the paper. “Our results show that their hypotheses were close to what is playing out in Greenland today.”

The climate mitigation path the world follows will determine how much the ice slabs will contribute to sea level in decades to come – from a couple millimeters to a few inches. “Humans have a choice about which way this goes,” MacFerrin said.