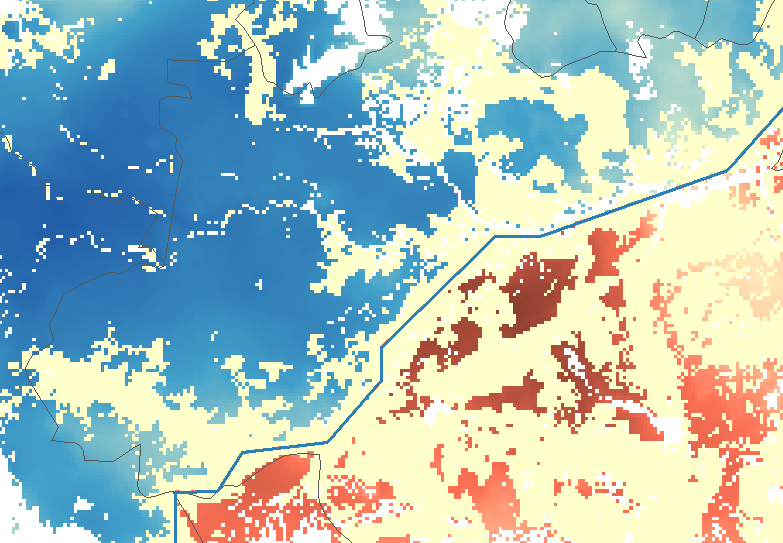 The largest block of tropical forest in the planet may be severely threatened. One of ten species of tree in the world grows in Amazonia, and half of them could be threatened by the middle of the century. This is one of the findings of a recent study published in Nature Climate Change, where four researchers from Brazil and the Netherlands present an analysis, combining scenarios of deforestation and climate change with alarming conclusions. According to the prediction of their worst case scenario, following business as usual trends, half of the forest in southern part of Amazonia may be reduced to fragments threatening many species.

First, they produced maps of the original distribution of each one of the 10,071 known Amazonian tree species before human-induced changes. Those maps were stacked to average the number of species present in squares of 10 x 10 kilometers, estimating species richness in those spaces, reaching ~1,500 species per square. Mapping the place where species could be found is important to obtain the limits of temperature and precipitation where they are apparently comfortable, explains first author Vitor Gomes. By stacking the original distribution of the species to the total deforestation by 2013 in Amazônia (~10%) they observed that 807 species may be classified as threatened. According to the study, by 2013 the deforestation impacted suitable areas of distribution for 98.7% of the tree species in Amazonia.

The authors considered that a realistic future scenario should analyse both impacts combined, and the results of this combination showed even higher losses. The losses may vary between 53-65%, from best case scenario (optimistic) to worst case scenario (pessimist). Such losses may result in a reduction between 43-58% of the species richness. “Tropical forests have an important role of in regulating climate, providing ecosystem services and conserving biodiversity, and we are facing the risk of losing almost 60% of the Amazonian tree species richness, says Rafael P. Salomão, professor of Universidade Federal da Amazônia in Belém, Brazil.

Even the best case scenario predicts that more than half of the suitable areas may be lost. The total number of threatened species in the combined scenarios varied between 4,872 (48.4%) and 4,993 (49.6%). Despite the small difference between the scenarios, in the best case scenario the number of threatened species classified as Critically Endangered (CR) is lower, dropping from 22% (pessimist) to 11% (optimistic). The worst case scenario is based on current trends of deforestation and CO2 emissions, considering no mitigating actions or increase in governance. One of the maps produced by the study shows Amazonia halved in the worst case scenario. One of the halves includes east, southern and southeast Amazonia, and shows a severely fragmented forest, and the other half, which holds northern, central and west Amazonia shows a still continuous forest block.

Common species of the fragmented block, such as Protium altissimum (Aubl.) Marchand. may face higher threats. This species is the second most abundant in Amazonia occurring with a high number of individuals. In the severely fragmented area the deforestation is already intense, especially in the region known as the “arc of deforestation”. The continuous block may be less impacted by deforestation, although it is not immune to climate change. Eperua falcata Aubl., a common species in Guiana, and also one of the most abundant species in Amazonia, may lose up to 63% of its suitable area. According the coauthor Hans ter Steege, researcher of Naturalis Biodiversity Center in Leiden, The Netherlands, it could be hard for E. falcata finding new environments in the future. The individuals of this species can’t spread their seeds more than 15 meter far need around a century to mature.

“Many species populations move slowly. I often read papers considering that some forest types will be found in other areas by 2050 due to climate change. But how these forests will even get there? Will they take a train?”.

Although the study shows alarming results it highlights the important role of the Amazonian protected areas network. These areas may prevent the reduction of the species richness of the predicted future impacts. “Even those area are not completely immune to climate change. Our models show that the forests outside the protected areas network could lose a third more species”, says Vitor Gomes. The authors added that the worst case scenario looks even more realistic due to the recent rises of the deforestation in Amazonia, and current efforts limiting global warming are clearly insufficient.

Ima Vieira, co-author of the study and researcher of Museu Goeldi in Belém, Brazil, warns about the great risk that Amazonian forest may face due to the approval of the brazilian Bill 2362/2019, which proposes the elimination of legal reserve on rural properties. Says Ima, “If this happens, about 89 million hectares can be directly threatened by deforestation in the Amazonia. We are already impressed by the results of this study, imagine what could happen if such level of environmental throwback come true. The forest of the future could be divided into several blocks, where many species would suffer serious risks of extinction. It is fundamental improving environmental governance in the region, considering protected areas and legal reserves as complementary instruments for the protection of biodiversity”.

The study concludes with the example of the Atlantic Forest, that currently holds around 10% of its original cover, and for more than a century has been target of several studies alerting about its degradation, and therefore, letting Amazonia face the same destiny would not be an option.