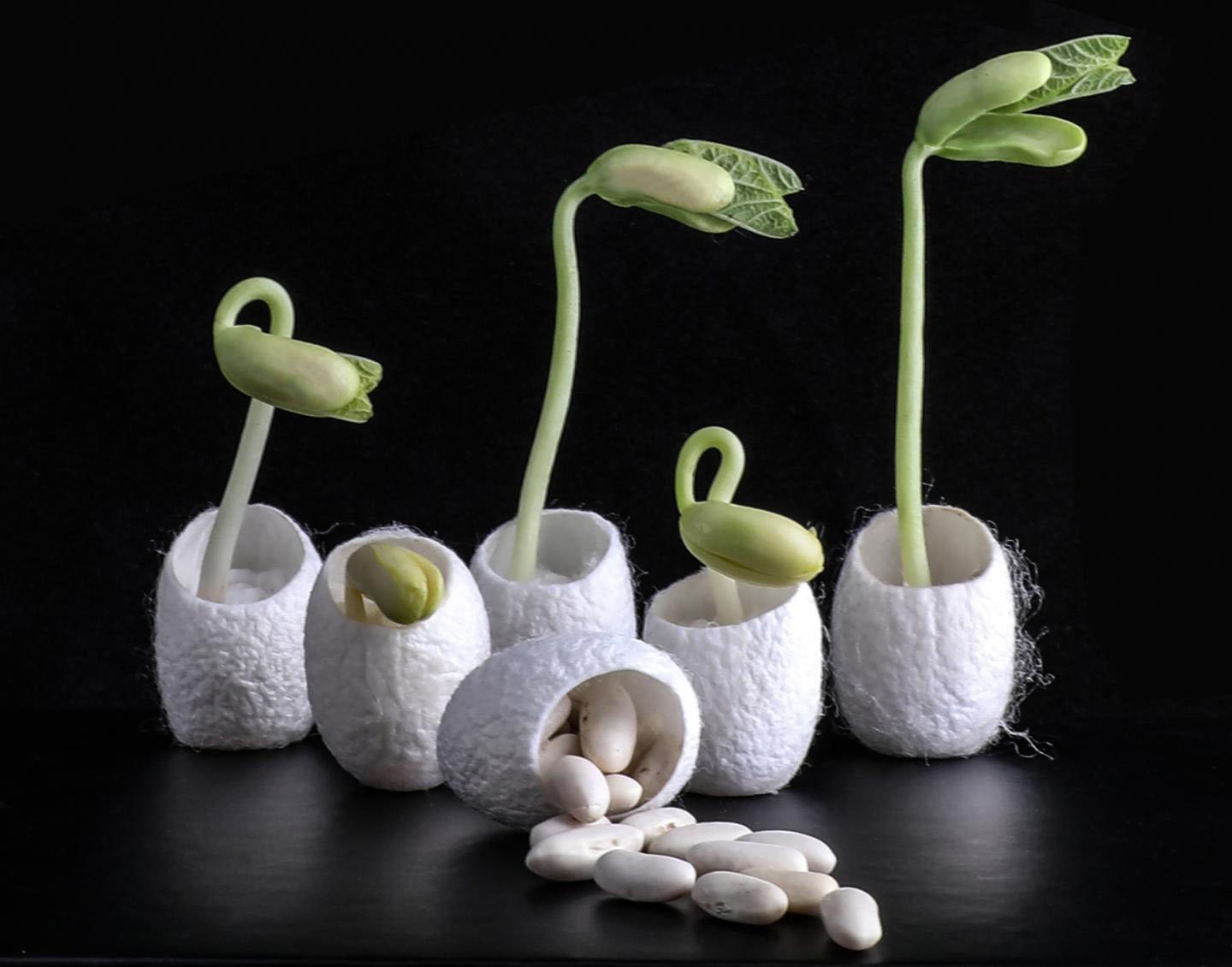 Providing seeds with a protective coating that also supplies essential nutrients to the germinating plant could make it possible to grow crops in otherwise unproductive soils, according to new research at MIT.

A team of engineers has coated seeds with silk that has been treated with a kind of bacteria that naturally produce a nitrogen fertilizer, to help the germinating plants develop. Tests have shown that these seeds can grow successfully in soils that are too salty to allow untreated seeds to develop normally. The researchers hope this process, which can be applied inexpensively and without the need for specialized equipment, could open up areas of land to farming that are now considered unsuitable for agriculture.

The findings are being published this week in the journal PNAS, in a paper by graduate students Augustine Zvinavashe ’16 and Hui Sun, postdoc Eugen Lim, and professor of civil and environmental engineering Benedetto Marelli.

The work grew out of Marelli’s previous research on using silk coatings as a way to extend the shelf life of seeds used as food crops.

“When I was doing some research on that, I stumbled on biofertilizers that can be used to increase the amount of nutrients in the soil,” he says.

These fertilizers use microbes that live symbiotically with certain plants and convert nitrogen from the air into a form that can be readily taken up by the plants.

Not only does this provide a natural fertilizer to the plant crops, but it avoids problems associated with other fertilizing approaches, he says: “One of the big problems with nitrogen fertilizers is they have a big environmental impact, because they are very energetically demanding to produce.”

These artificial fertilizers may also have a negative impact on soil quality, according to Marelli.

“We came up with the idea to use them in our seed coating, and once the seed was in the soil, they would resuscitate,” he says.

Preliminary tests did not turn out well, however; the bacteria weren’t preserved as well as expected.

That’s when Zvinavashe came up with the idea of adding a particular nutrient to the mix, a kind of sugar known as trehalose, which some organisms use to survive under low-water conditions. The silk, bacteria, and trehalose were all suspended in water, and the researchers simply soaked the seeds in the solution for a few seconds to produce an even coating. Then the seeds were tested at both MIT and a research facility operated by the Mohammed VI Polytechnic University in Ben Guerir, Morocco.

The resulting plants, helped by ongoing fertilizer production by the bacteria, developed in better health than those from untreated seeds and grew successfully in soil from fields that are presently not productive for agriculture, Marelli says.

In practice, such coatings could be applied to the seeds by either dipping or spray coating, the researchers say. Either process can be done at ordinary ambient temperature and pressure.

“The process is fast, easy, and it might be scalable” to allow for larger farms and unskilled growers to make use of it,” Zvinavashe says. “The seeds can be simply dip-coated for a few seconds,” producing a coating that is just a few micrometers thick.

The ordinary silk they use “is water soluble, so as soon as it’s exposed to the soil, the bacteria are released,” Marelli says.

But the coating nevertheless provides enough protection and nutrients to allow the seeds to germinate in soil with a salinity level that would ordinarily prevent their normal growth.

“We do see plants that grow in soil where otherwise nothing grows,” he says.

These rhizobacteria normally provide fertilizer to legume crops such as common beans and chickpeas, and those have been the focus of the research so far, but it may be possible to adapt them to work with other kinds of crops as well, and that is part of the team’s ongoing research. “There is a big push to extend the use of rhizobacteria to nonlegume crops,” he says. One way to accomplish that might be to modify the DNA of the bacteria, plants, or both, he says, but that may not be necessary.

“Our approach is almost agnostic to the kind of plant and bacteria,” he says, and it may be feasible “to stabilize, encapsulate and deliver [the bacteria] to the soil, so it becomes more benign for germination” of other kinds of plants as well.

Even if limited to legume crops, the method could still make a significant difference to regions with large areas of saline soil.

“Based on the excitement we saw with our collaboration in Morocco,” Marelli says, “this could be very impactful.”

As a next step, the researchers are working on developing new coatings that could not only protect seeds from saline soil, but also make them more resistant to drought, using coatings that absorb water from the soil. Meanwhile, next year they will begin test plantings out in open experimental fields in Morocco; their previous plantings have been done indoors under more controlled conditions.