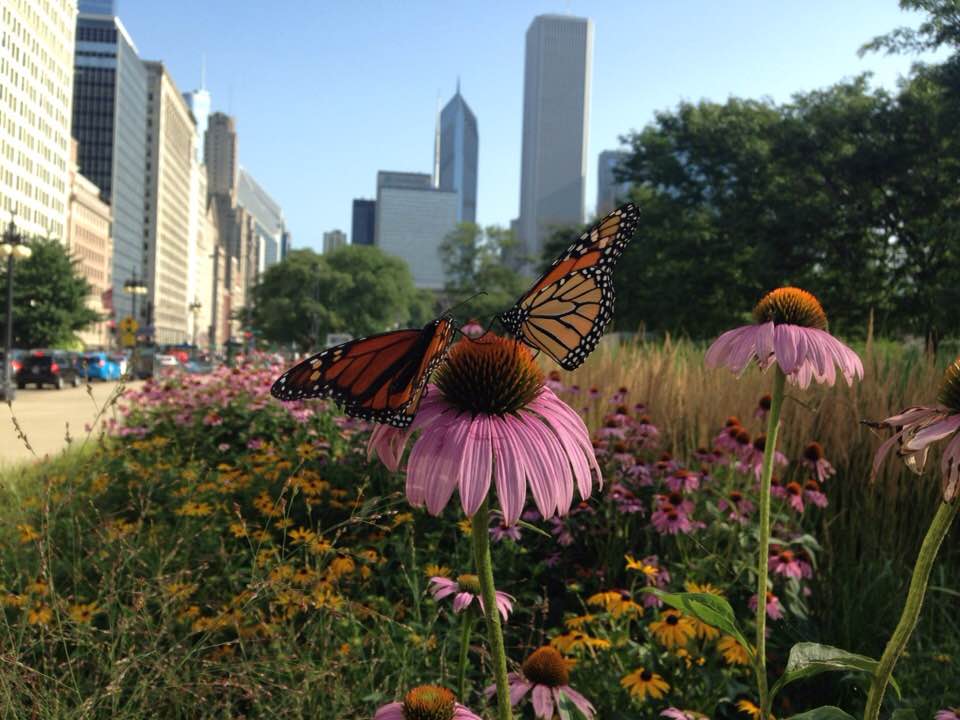 It’s easy to think of cities as being the enemy of nature. When we talk about escaping the skyscrapers and car horns, we have visions of breathing in fresh mountain air while hiking through forests in mind. But for Monarch butterflies, the busy cities we know could be key to their survival.

Monarchs, with their striking orange and black wings, are some of the most well-known butterflies in the US. But the Monarch population has declined over 80% in the last twenty years, and scientists warn that as milkweed – the only plant Monarchs can lay their eggs on – continues to disappear across the United States, these butterflies could disappear too. Two new studies in the journal Frontiers of Ecology and Evolution show that one of the most important things we can do to save the Monarchs is plant milkweed in cities.

“Metropolitan areas actually matter for wildlife conservation, and that’s especially true for pollinators like the Monarch that can survive with very small patches of habitat,” says Abigail Derby Lewis, a senior conservation ecologist at the Field Museum and lead author of the paper Does Nature Need Cities? “There’s an assumption that cities are not important places for plants and animals, but that’s because no one had looked at these landscapes in a systematic way, or at the collective impact from many small-scale plantings across large urban geographies.”

“This is the first study that estimates the amount of habitat in cities available to Monarchs and other pollinators, and how much potential there is to add more,” says Mark Johnston, a conservation ecologist at the Field and lead author of the team’s second paper. This paper dives deep into the science of quantifying the role that large urban areas play in supporting Monarchs while mapping out opportunities to plant more by providing planning tools to guide Monarch conservation efforts in cities.

In order to discover how much milkweed cities could contribute, the research team used field research coupled with high resolution spatial images to map where milkweed already occurs across large metropolitan regions and where there’s potenital to add. For example, while there’s not much milkweed found in residential areas, yards represent an enormous opportunity to boost milkweed numbers because of how many homes there are.

“This approach to examining metropolitan landscapes allows us to ‘see’ cities in a way we haven’t been able to before, and this enables us to get a better estimate of how much potential space there is to create habitat,” says Johnston. Researchers have estimated that saving Monarchs would entail planting 1.8 billion stems of milkweed. To put that in perspective, if we planted one stem of milkweed per square foot, it would cover an area about the size of Washington, DC. But a lot of that habitat space is available in America’s cities. “We think that cities could support 15 to 30 percent of the milkweed that’s needed to save Monarchs,” says Johnston.

“Urban areas are only three percent of US landmass,” adds Derby Lewis. “Conservationists and urban planners were shocked to learn what an outsize implication cities could have for Monarch conservation.”

“We’ve looked at cities from a Monarch’s point of view by identifying the best places and most effective ways to engage different land owners to transform low-quality green space, like lawn grass, into high-quality homes for these butterflies” says Derby Lewis. “This perspective also helps us understand the role cities can play to support a wide range of other wildlife, including ones that aren’t as beloved by the public as butterflies. Beetles are incredible pollinators, but a campaign to ‘plant for beetles’ probably wouldn’t go anywhere. By helping Monarch butterflies, we’re helping other pollinators, which are on the decline. Many of our main crops need pollinators to pollinate them – things like apples and avocados.”

Just because urban dwellers can plant milkweed, however, doesn’t always mean they will. In some regards, researchers say the most interesting effect of the study is yet to come. While urban landscapes have the capacity to help a whole suite of species by creating green spaces that are teeming with food and shelter for these small but mighty pollinators, there are some challenges to face in order to make that a reality. A critical one is moving toward a public perception that milkweed and native flowers are acceptable and beautiful elements in home landscaping. “Certainly having the term ‘weed’ in the name of milkweed – which isn’t a weed – has not helped the reputation of these superstar native plants,” says Derby Lewis.

Shifting societal norms of what is desirable in neighborhood gardens is something both Derby Lewis and Johnston were passionate about. Gardening has been a favorite pastime for decades, and is one of the most accessible ways for people to feel connected to the earth. To give gardeners and non-gardeners alike another purpose for their planting is an important message of this study. “I would encourage people to question the grassy lawns that dominate our urban landscape – could we plant something else that would provide habitat for Monarchs and other wildlife?” asks Johnston.

As once unoccupied land continues to develop, we’re reminded that nature can be found everywhere and in many forms, and every patch of land can be valuable. As with most things, it takes a village – and a city.