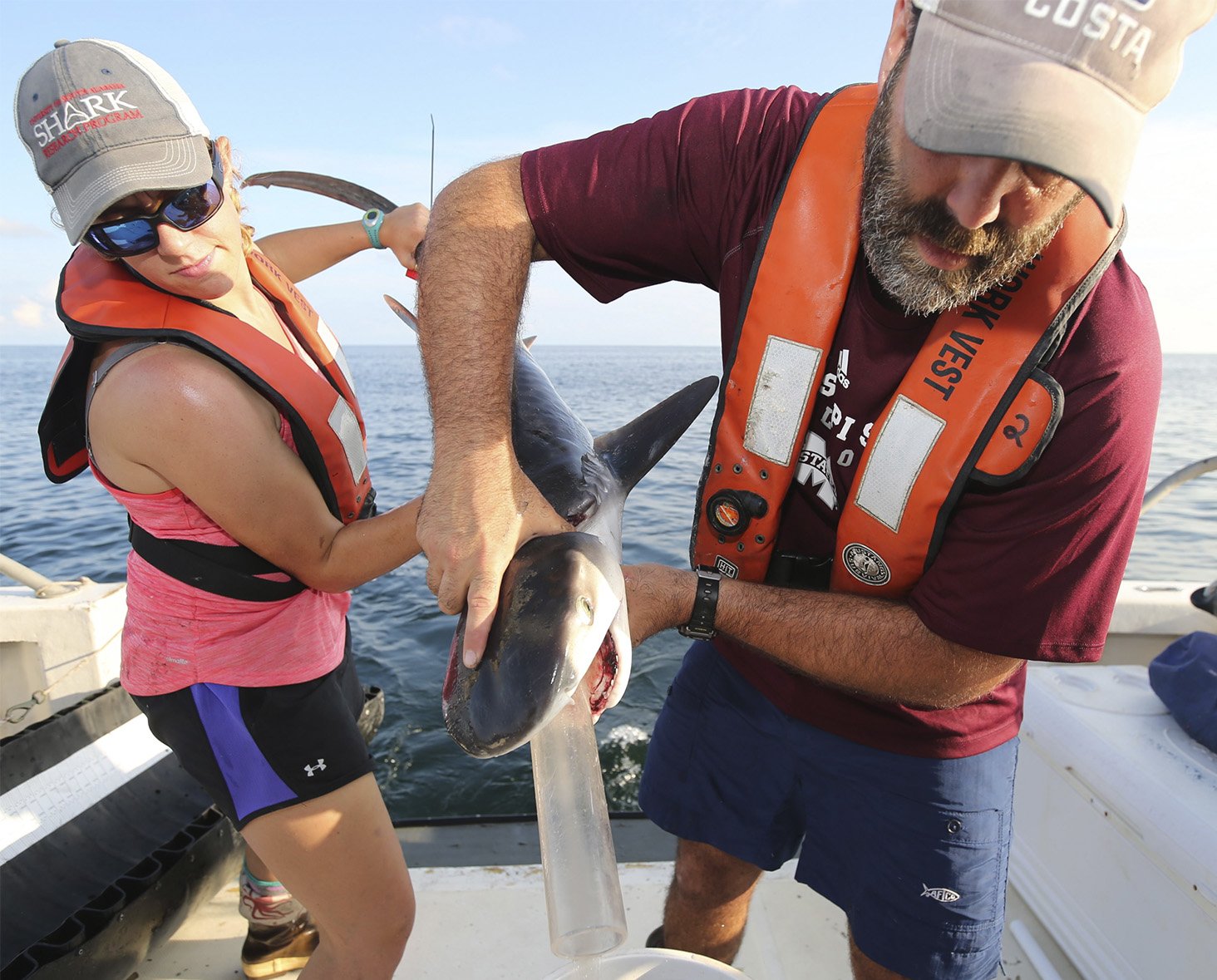 Tiger sharks have a reputation for being the “garbage cans of the sea”–they’ll eat just about anything, from dolphins and sea turtles to rubber tires. But before these top predators grow to their adult size of 15 feet, young tiger sharks have an even more unusual diet. Scientists have just announced in a new paper in Ecology that baby tiger sharks eat birds. And not seabirds like gulls or pelicans–familiar backyard birds like sparrows, woodpeckers, and doves.

“Tiger sharks will see an easy meal and snatch it up, but I was surprised to learn that the sharks were eating songbirds–I assumed that they’d be seabirds,” says Kevin Feldheim, a researcher at Chicago’s Field Museum and a co-author of the study who led the DNA analysis that told the researchers what kinds of birds the sharks were eating.

“It was one of the coolest projects I’ve been associated with using DNA to tell a story.”

The paper’s lead author, Marcus Drymon of Mississippi State University, and his team investigated juvenile tiger sharks’ diets by wrassling the three-foot-long sharks onto a boat, pumping the sharks’ stomachs, and analyzing a sample of their stomach contents. (The sharks were then released unharmed.) Drymon and the team were surprised to see that of the 105 sharks they studied, 41 had bird remains in their stomachs.

But since the birds were partially digested, it was hard for the scientists to tell exactly what kinds of birds they were. To figure it out, they sent the bird remains to the Field Museum’s Pritzker Laboratory for Molecular Systematics and Evolution for DNA analysis. The scientists took tiny pieces of the bird remains and used chemicals to break them down into their basic molecular components. From there, they were able to examine the DNA sequences present in the bird tissues and compared them to databases of bird DNA to see what species they were from. “None of them were seagulls, pelicans, cormorants, or any kind of marine bird,” Drymon says. “They were all terrestrial birds”–the kinds that might live in your backyard.

This isn’t the first time that tiger sharks have been known to eat birds. “There’s a site off Hawaii where baby albatrosses learn to fly, and adult tiger sharks pick them off,” explains Feldheim. But this is the first time scientists have evidence that tiger sharks eat songbirds that primarily live on land. That’s because these sharks were in the Gulf of Mexico, during migration season. “In every instance, the timing of the tiger shark eating the bird coincided with the peak sighting for that species of bird off our coast,” says Drymon.

“The tiger sharks scavenge on songbirds that have trouble flying over the ocean. During migration, they’re already worn out, and then they get tired or fall into the ocean during a storm,” adds Feldheim. He notes that the terrestrial birds might make more attractive prey than seabirds because the seabirds can handle themselves better in and around the water than the songbirds can.

The study gives scientists a better understanding of tiger sharks, which could ultimately help us to protect them. “All sharks are in trouble,” says Feldheim. “We don’t know the extent of how industrialized fishing has taken a toll, but the vast majority of top predator populations have declined in recent years.”

Beyond the conservation implications, though, Feldheim argues that the study shows the importance of having DNA databases available to scientists: “It shows us how much more we can still learn about sharks in general and what DNA can tell us that observation can’t.”