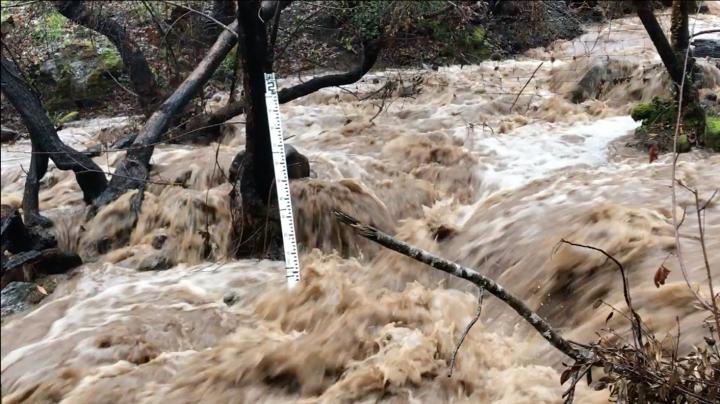 Atmospheric rivers pose a $1 billion-a-year flood risk in the West, according to a study released today.

Researchers at Scripps Institution of Oceanography at the University of California San Diego and the U.S. Army Corps of Engineers analyzed the economic impact of the winter storms that deliver an increasingly large share of rain and snow to California and the West. The study appears Dec. 4 in the journal Science Advances.

The team led by Scripps postdoctoral researcher Tom Corringham found that flooding has caused nearly $51 billion in damages to western states in the last 40 years. More than 84 percent of these damages were caused by atmospheric rivers (ARs), which are long narrow corridors of water vapor in the atmosphere capable of carrying more than twice the volume of the Amazon river through the sky.

In some coastal areas of Oregon and Northern California, ARs were responsible for over 99 percent of all flood damages, the study said. The researchers also noted that much of the economic damage was caused by only a handful of AR storms. An estimated $23 billion in damage, nearly half of all flood damage in the West over 40 years, was caused by just ten ARs. Overall the total flood damage from ARs averaged $1.1 billion annually throughout the West.

Last year, Scripps researcher F. Martin Ralph and colleagues created a scale for the intensity and impacts of ARs to help distinguish between weak and strong ARs. The scale is from 1 to 5 and is analogous to those used for rating hurricanes and tornadoes. It includes ARs that are mostly beneficial (AR 1 and AR 2) and those that are mostly hazardous (AR 4 and AR 5). Corringham’s analysis confirmed that flood damages from AR 1 and AR 2 events are generally low, and that each category increase in AR intensity corresponds to a tenfold increase in flood damage, with AR 4 and AR 5 events causing damages in the 10s and 100s of millions of dollars, respectively.

“A small number of extreme ARs cause most of the flood damages in the West,” said Corringham, “and even modest increases in intensity could significantly increase their impacts.”

The study, funded by NOAA through the California Nevada Climate Applications Program, the federal Bureau of Reclamation, and the University of California Office of the President, is the latest of several led by researchers affiliated with Scripps’ Center for Western Weather and Water Extremes (CW3E). In recent research, ARs have been shown to be major drivers of weather and hydrology in the western United States, often making the difference between drought and flood years over the span of just a few intense storms. Scientists expect that ARs will become even more significant as global warming trends increase their intensity.

Because of this, scientists and emergency officials have called for more research to improve the ability to forecast the paths of ARs as they reach land and their potential to deliver rain and snow. Those improved forecasts could guide management of dams and reservoirs and give emergency officials additional time to prepare for floods. CW3E researchers are currently working on improving reservoir management at two locations through the Forecast Informed Reservoir Operations (FIRO) program and are considering expanding to other locations.

“This is a reminder that weather and climate matter,” he said. “Every step we take now to stabilize the global climate system stands to reduce future adverse impacts on our economy.”