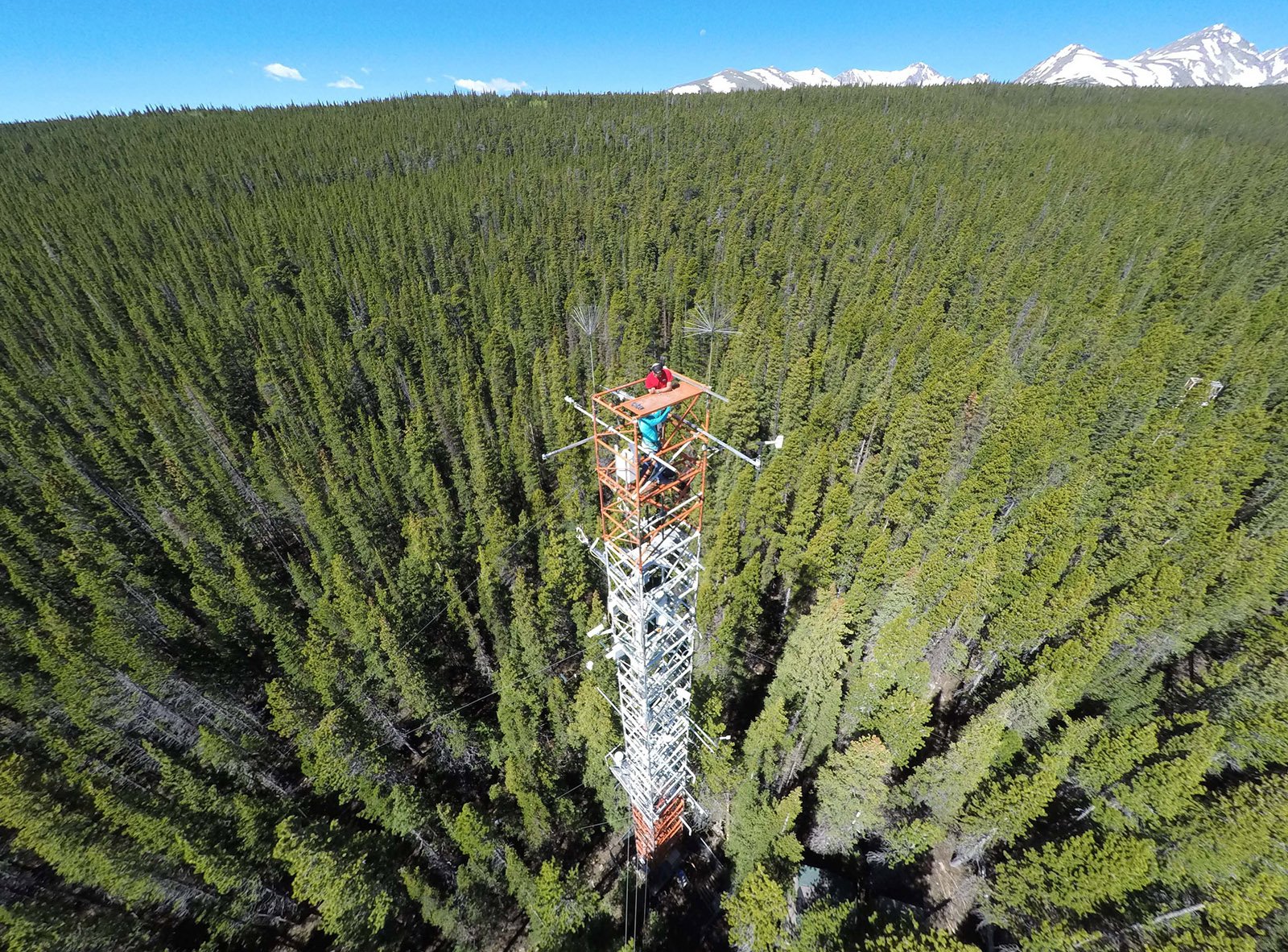 Winters in the northern hemisphere are brutal. The harsh conditions drive some species to hibernate; bears reduce their metabolic state to conserve energy until spring. Forests also endure winter by conserving energy; they shut down photosynthesis, the process by which a green pigment called chlorophyll captures sunlight and carbon dioxide (CO2) to produce the chemical energy that fuels the plants. The total production of chemical energy resulting from photosynthesis is called Gross Primary Production (GPP). GPP in evergreen forests tells scientists how much CO2 these vast and remote systems are breathing in.

Because photosynthesis pulls CO2 out of the atmosphere, understanding forest activity is crucial for tracking global carbon levels. For decades, scientists have used satellites to monitor the changes in greenness of deciduous forests to track GPP. In the fall and winter, deciduous leaves turn brown and drop when they’re dormant. In the spring and summer, the chlorophyll returns as green leaves and photosynthesis ramps up. However, evergreen trees retain their chlorophyll-filled green needles year round, preventing scientists from detecting the onset and decline of photosynthesis on a large scale.

For the first time, a new study has linked seasonal GPP cycles to a process that occurs with photosynthesis but has recently become trackable by certain satellites–solar-induced fluorescence (SIF). Photosynthesis occurs when the sun’s energy excites chlorophyll into a higher energy state. When the chlorophyll returns to its normal state it emits a photon, producing light too low for the naked eye. The resulting “glow” is the SIF.

A collaborative team of researchers used a scanning spectrometer on a tower to measure fluorescent “glow” throughout the season in a Colorado evergreen forest. The team is the first to link SIF with needle physiology, canopy photosynthesis and satellite-derived fluorescence. They found that daily and seasonal SIF patterns closely matched the timing and magnitude of GPP. In the springtime, evergreens activate chlorophyll in their needles, which drives both fluorescence and photosynthesis, matching closely with SIF that satellites have recently been able to measure.

One of the ways plants protect themselves during the harsh winters is by deploying photoprotective pigments that act as “sunscreen.” The study found that when plants apply this sunscreen, both photosynthesis and fluorescence decrease, enabling scientists to feel confident in the SIF signal as a proxy to monitor the breathing (CO2 uptake) of evergreen forests.

Now, scientists can use the satellite-based fluorescence measurements as an indicator of photosynthetic activity in evergreen forests at an unprecedented scale. By seeing the glow of evergreen forests from space, we can better understand how these forests are responding to climate change.

“We are trying to develop techniques to be able to ‘see’ photosynthesis at large scales, so we know just how much CO2 the biosphere is consuming…keeping a finger on the pulse of the biosphere,” said Troy Magney, research scientist of the NASA Jet Propulsion Laboratory and the California Institute of Technology.

Magney and the team collected data from a spectrometer system mounted atop a tower between June 2017 and June 2018 in a subalpine conifer forest at Niwot Ridge, Colorado. They were able to untangle the physiological changes inside the conifer needles to better understand why we see SIF seasonal cycles. Turns out, it’s all about the pigments.

“You and I can get sunburned. Too much ultraviolet radiation will damage our cells. Some people can protect themselves– their skin produces more of the pigment melanin to adjust to high-light environments,” said David Bowling, biology professor at the University of Utah and coauthor of the study. “Plants have a different, but similar process.”

Without photosynthesis to utilize the sun’s energy, plants need to protect themselves. The researchers found that the conifers produced high levels of pigments that are part of the xanthophyll cycle that shields its tissues from excess light. Throughout the season, the fraction of “sunscreen” changes–more in the winter, less in the summer–decreasing both fluorescence and photosynthesis.

“Ultimately, measuring the small fluorescent glow from plants will allow us to see exactly timing and magnitude of carbon uptake from the terrestrial biosphere. This will help us understand how forests are responding to climate change and suggest how they might respond to future climate change,” said Magney.