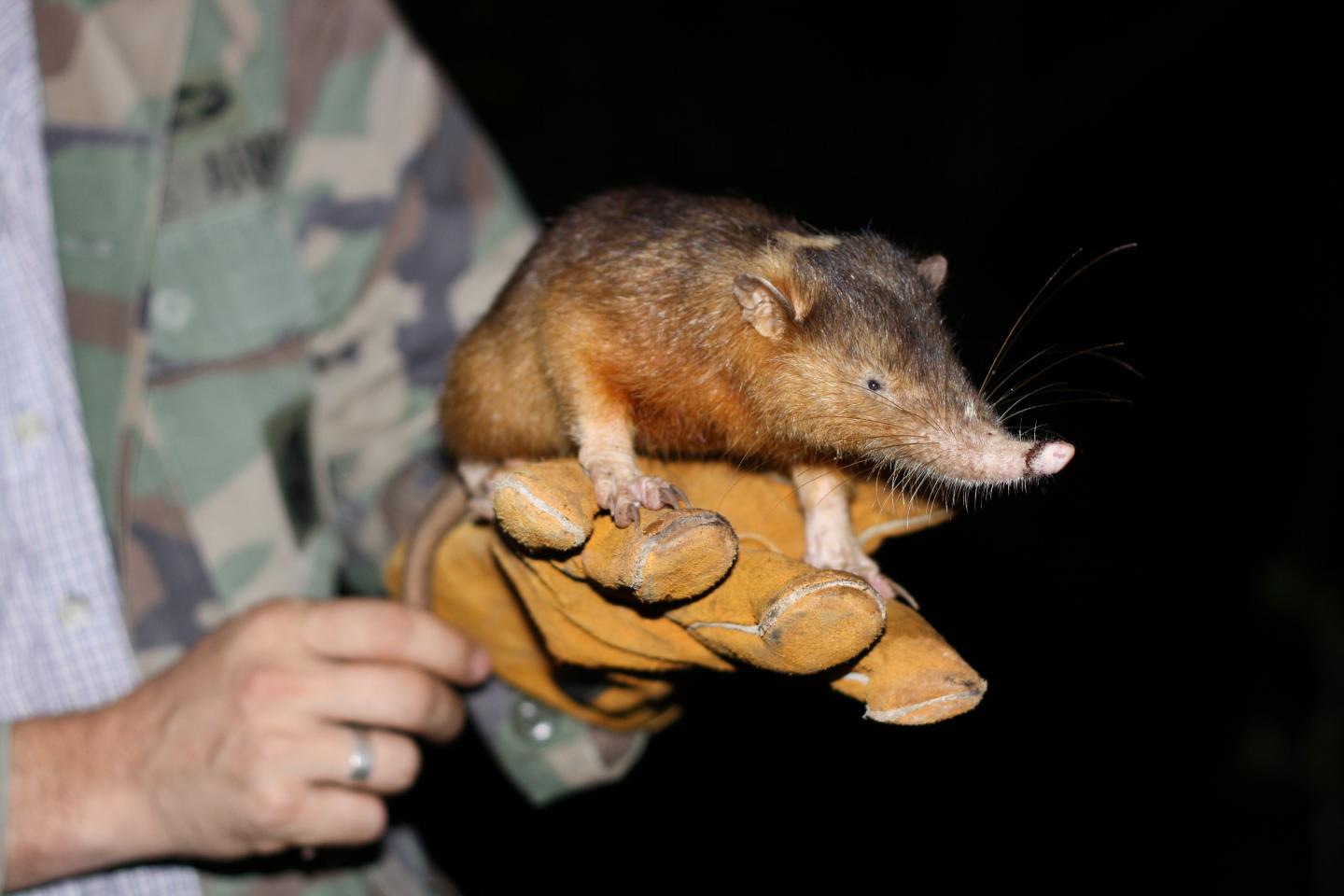 Researchers from Liverpool School of Tropical Medicine (LSTM) and ZSL (Zoological Society of London) have worked with a team of scientists from institutions across the globe – to uncover the truth behind the origin of venom in some very unusual mammals.

As outlined in a paper published today in PNAS, the team focused their attention on an unusual endangered species known as the Hispaniolan solenodon (Solenodon paradoxus) – a member of the eulipotyphlan order of mammals, an ancient group of insectivores also including hedgehogs, moles and shrews. Obtaining venom from wild solenodons and unravelling the genetic blueprint of this species enabled the identification of the proteins that make up their venom, revealing that it consists of multiple kallikrein-1 serine proteases. Analysis of these toxins showed they are probably used by solenodons to cause drops in blood pressure in the vertebrate prey on which they sometimes feed.

To their surprise, the team found that the kallikrein-1 serine protease toxins found in solenodon venom had evolved in parallel with those detected in the venom of distantly related venomous shrews. The same building blocks of venom have therefore evolved convergently within solenodons and shrews, despite their divergence from one another over 70 million years ago – when dinosaurs still walked the earth.

Professor Nick Casewell from LSTM’s Centre for Snakebite Research & Interventions is lead author on the paper.

He said: “These particular proteins are present in the salivary glands of many mammals. Through our research we are able to demonstrate that they have been independently co-opted for a toxic role in the oral venom systems of both solenodons and shrews. These findings represent a fascinating example of how evolution can funnel novel adaptations down repeatable pathways”.

The Hispaniolan solenodon is only found on the Caribbean island of Hispaniola (made up of the Dominican Republic and Haiti), and is considered one of the most Evolutionarily Distinct and Globally Endangered (EDGE) mammals by ZSL’s EDGE of Existence programme. It is one of the few venomous mammals, producing toxic saliva that it injects into its prey through unique grooves in its lower incisor teeth (which gives the solenodon its name). Solenodons are some of the last few surviving Caribbean land mammals and are threatened today by habitat loss and predation from introduced dogs and cats.

Professor Samuel Turvey, from ZSL’s Institute of Zoology and who jointly led the project, said: “This study highlights how little we know about one of the world’s most fascinating animals. Unravelling details of the solenodon’s previously unstudied venom system helps us to understand the mechanisms behind convergent evolution – and demonstrates the importance of conserving the world’s remarkable EDGE species.”

Despite venoms being a rare trait in mammals, the team showed that venom has evolved independently on at least four occasions in eulipotyphlan mammals. This number of venom origins is more than those in all other groups of mammals combined, and more than for many other groups of vertebrates.