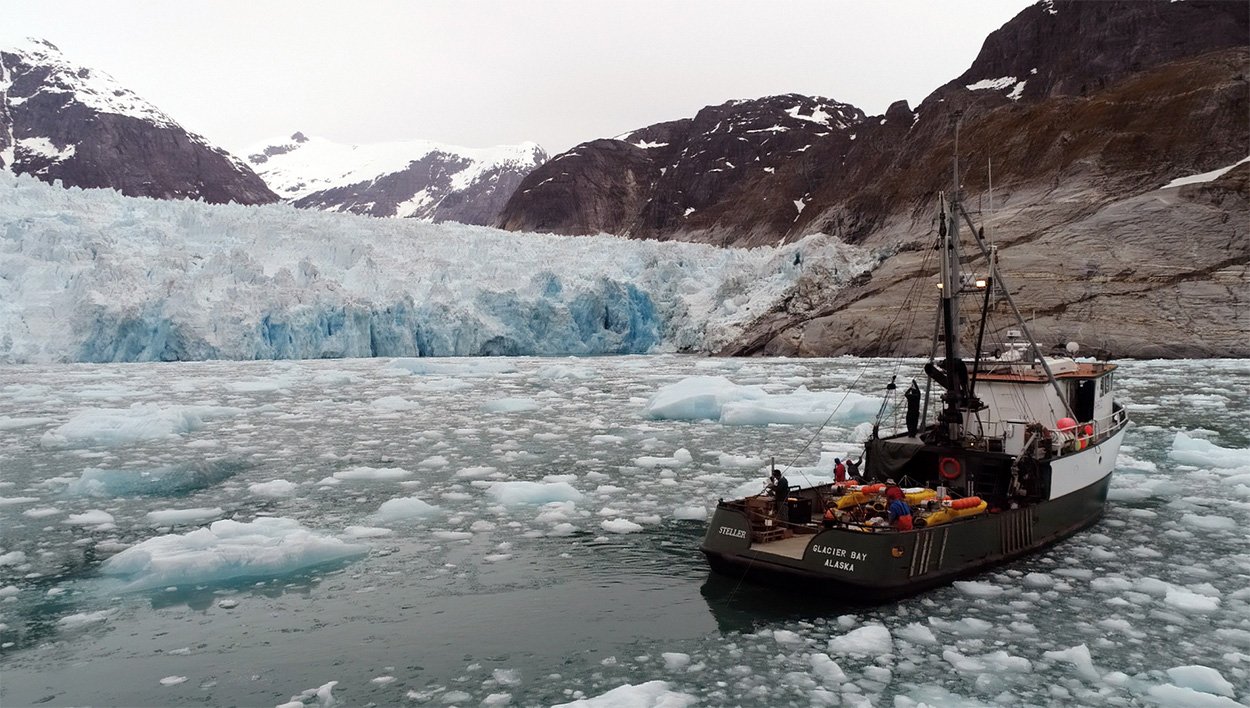 Researchers have developed a new method to allow for the first direct measurement of the submarine melt rate of a tidewater glacier, and, in doing so, they concluded that current theoretical models may be underestimating glacial melt by up to two orders of magnitude.

In a National Science Foundation-funded project, a team of scientists, led by University of Oregon oceanographer Dave Sutherland, studied the subsurface melting of the LeConte Glacier, which flows into LeConte Bay south of Juneau, Alaska.

The team’s findings, which could lead to improved forecasting of climate-driven sea level rise, were published in the July 26 issue of the journal Science.

Direct melting measurements previously have been made on ice shelves in Antarctica by boring through to the ice-ocean interface beneath. In the case of vertical-face glaciers terminating at the ocean, however, those techniques are not available.

“We don’t have that platform to be able to access the ice in this way,” said Sutherland, a professor in the UO’s Department of Earth Sciences.

“Tidewater glaciers are always calving and moving very rapidly, and you don’t want to take a boat up there too closely.”

Most previous research on the underwater melting of glaciers relied on theoretical modeling, measuring conditions near the glaciers and then applying theory to predict melt rates. But this theory had never been directly tested.

“This theory is used widely in our field,” said study co-author Rebecca H. Jackson, an oceanographer at Rutgers University who was a postdoctoral researcher at Oregon State University during the project. “It’s used in glacier models to study questions like: how will the glacier respond if the ocean warms by one or two degrees?”

To test these models in the field, the research team of oceanographers and glaciologists deployed a multibeam sonar to scan the glacier’s ocean-ice interface from a fishing vessel six times in August 2016 and five times in May 2017.

The sonar allowed the team to image and profile large swaths of the underwater ice, where the glacier drains from the Stikine Icefield. Also gathered were data on the temperature, salinity and velocity of the water downstream from the glacier, which allowed the researchers to estimate the meltwater flow.

They then looked for changes in melt patterns that occurred between the August and May measurements.

“We measured both the ocean properties in front of the glacier and the melt rates, and we found that they are not related in the way we expected,” Jackson said.

“These two sets of measurements show that melt rates are significantly, sometimes up to a factor of 100, higher than existing theory would predict.”

There are two main categories of glacial melt: discharge-driven and ambient melt. Subglacial discharge occurs when large volumes, or plumes, of buoyant meltwater are released below the glacier. The plume combines with surrounding water to pick up speed and volume as it rises up swiftly against the glacial face. The current steadily eats away from the glacier face, undercutting the glacier before eventually diffusing into the surrounding waters.

Most previous studies of ice-ocean interactions have focused on these discharge plumes. The plumes, however, typically affect only a narrow area of the glacier face, while ambient melt instead covers the rest of the glacier face.

Predictions have estimated ambient melt to be 10-100 times less than the discharge melt, and, as such, it is often disregarded as insignificant, said Sutherland, who heads the UO’s Oceans and Ice Lab.

The research team found that submarine melt rates were high across the glacier’s face over both of the seasons surveyed, and that the melt rate increases from spring to summer.

While the study focused on one marine-terminating glacier, Jackson said, the new approach should be useful to any researchers who are studying melt rates at other glaciers. That would help to improve projections of global sea level rise, she added.

“Future sea level rise is primarily determined by how much ice is stored in these ice sheets,” Sutherland said. “We are focusing on the ocean-ice interfaces, because that’s where the extra melt and ice is coming from that controls how fast ice is lost. To improve the modeling, we have to know more about where melting occurs and the feedbacks involved.”