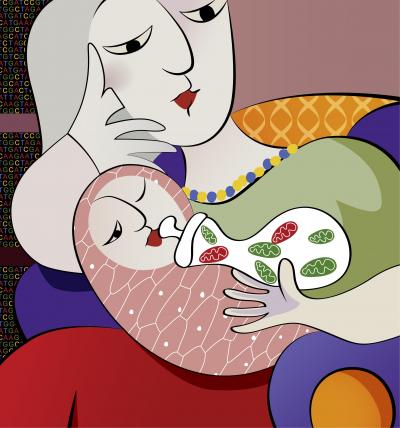 New insight into how genetic information stored in human mitochondria is passed from one generation to the next could have important implications for genetic counseling of women planning pregnancies, according to a study by researchers at Penn State and the University of California, Berkeley. The findings are especially relevant to women carrying disease-causing mutations within their mitochondrial DNA and those suffering from mitochondrial diseases.

Mitochondria are cellular subunits that produce energy, and mitochondrial diseases are among the most common genetic disorders. They occur in one in 5,000 people and can cause a wide range of health problems, ranging from fatigue to developmental disabilities to seizures to compromised heart function and poor vision.

The new study, which appears online the week of November 18, 2019 in the journal Proceedings of the National Academies of Sciences, reveals how mitochondrial DNA is transmitted between generations. The study, also found that children born to older mothers carry more mitochondrial mutations than children born to younger mothers. This could have important implications for inheritance of disease-related mutations.

“Some tissues with high energetic demands – such as muscle and brain – have hundreds to thousands of mitochondria and thus thousands of mitochondrial DNA copies,” said Kateryna Makova, Pentz Professor of Biology at Penn State and the co-corresponding author of the study. “Mitochondrial DNA is inherited from the mother, but only a small number of these copies actually get passed on in each egg. That means that at some point, there is a reduction in the number of mitochondrial DNA between generations, causing what biologists call a bottleneck, which can reduce the amount of genetic diversity passed on from mother to child. Understanding this bottleneck, when it happens, and how many mitochondrial DNA get through, could improve our understanding of how disease-related mutations get passed on.”

The research team found that there is a drastic bottleneck of mitochondrial DNA that takes place during oogenesis, the process by which egg cells are created, reducing thousands of copies of mitochondrial DNA down to only about seven to ten. Like shaking colored beads out of a bottle with a narrow neck, where the few beads that get through might not reflect the overall composition of the bottle, the mitochondrial DNA that gets passed on to the offspring may not have the proportion of disease-related mutations present in the mother.

“The size of the bottleneck affects the probability that a child inherits a disease-causing mutation from her or his mother,” said Peter Wilton, postdoctoral researcher at the University of California, Berkeley, and a co-first author of the study. “We found that, because of the narrow bottleneck, mutations in maternal mitochondrial DNA that were not very frequent were often lost within one generation – they were not present in the children. But those that were present at a higher proportion in the mother were more likely to get passed on, and in some cases may persist for up to five to ten generations.”

To accomplish this study, the research team relied on a collaboration with co-author Dr. Ian Paul, a pediatrician at the Penn State Milton S. Hershey Medical Center, who oversaw sample collection from 345 individuals in 96 multi-generational families. Families included at least two siblings, their mother, and in some cases the mother’s mother and additional generations.

“Knowing the size and timing of the bottleneck has important implications for genetic counseling,” said Makova. “Because the bottleneck occurs separately in each child’s cell lineage, a mother that is a carrier for a mitochondrial disease could pass on a disease-related mutation to one child but not the other. Now that we know when the bottleneck occurs, we hope to investigate oogenesis at a molecular level in animal models to get a better understanding of the process.”

The study also suggests that egg precursor cells with high proportions of disease-causing mutations might not make it to the next generation because of the evolutionary process called natural selection.

Importantly, children born to mothers that gave birth later in life had more mutation-carrying copies of their mitochondrial DNA as compared to younger mothers.

“All of the eggs are essentially fully developed when a girl is born, so they sit dormant for a long time,” said Zaidi. “Our results tell us that something is happening within these dormant eggs, for example their mitochondrial DNA might be dividing, which provides an opportunity to acquire mutations. Age may also play a role in the probability that a child might inherit a disease-causing mutation.”