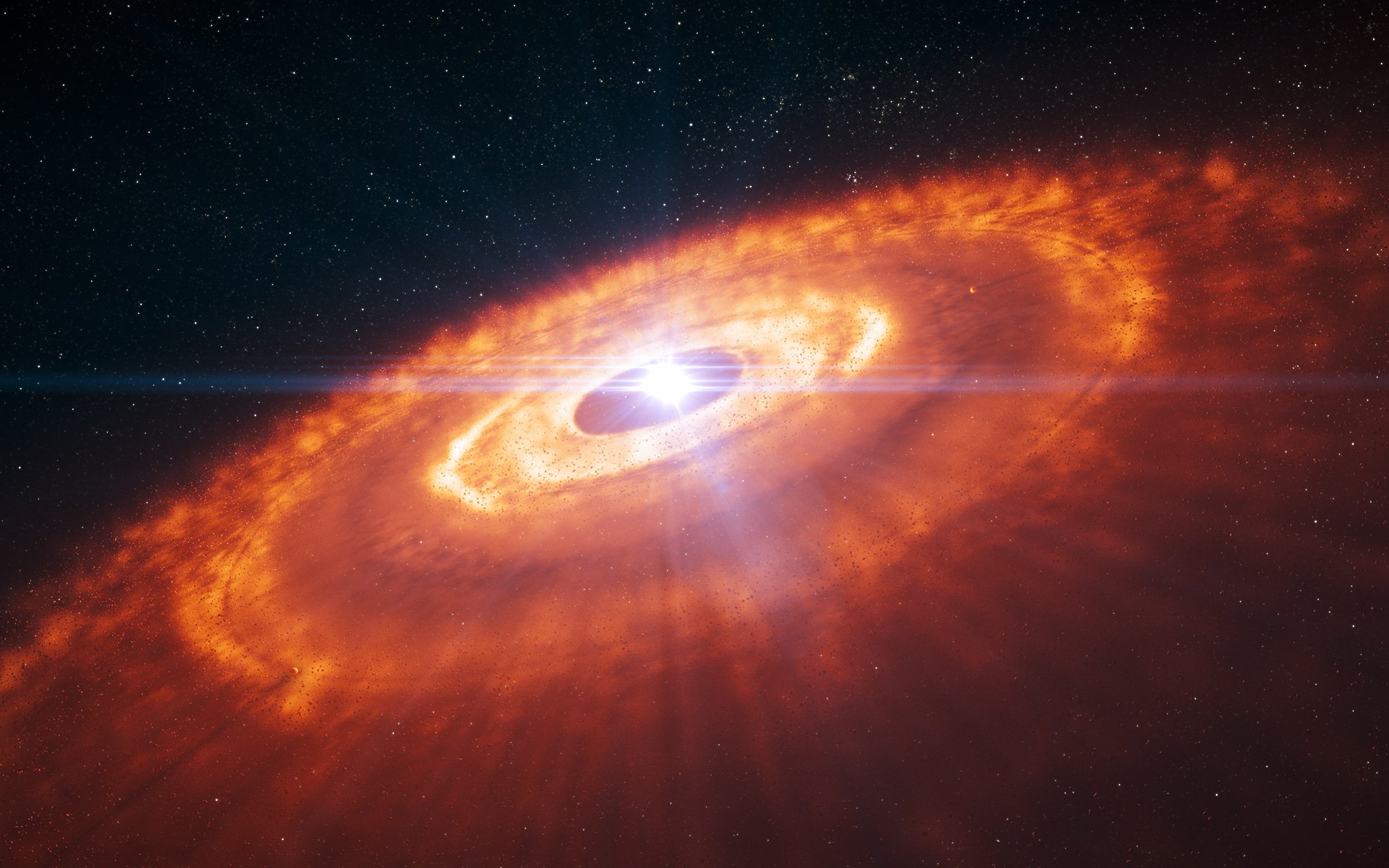 Astronomers using one of the most advanced radio telescopes have discovered a rare molecule in the dust and gas disc around a young star – and it may provide an answer to one of the conundrums facing astronomers.

The star, named HD 163296, is located 330 light years from Earth and formed over the last six million years.

It is surrounded by a disc of dust and gas – a so-called protoplanetary disc. It is within these discs that young planets are born. Using a radio telescope in the Atacama Desert in Chile, researchers were able to detect an extremely faint signal showing the existence of a rare form of carbon monoxide – known as an isotopologue (13C17O).

The detection has allowed an international collaboration of scientists, led by the University of Leeds, to measure the mass of the gas in the disc more accurately than ever before. The results show that disc is much heavier – or more ‘massive’ – than previously thought.

Alice Booth, a PhD researcher at Leeds who led the study, said: “Our new observations showed there was between two and six times more mass hiding in the disc than previous observations could measure.

“This is an important finding in terms of the birth of planetary systems in discs – if they contain more gas, then they have more building material to form more massive planets.”

The study – The first detection of 13C17O in a protoplanetary disk: a robust tracer of disk gas mass – is published today (12/09/2019) in Astrophysical Journal Letters.

The scientists’ conclusions are well timed. Recent observations of protoplanetary discs have perplexed astronomers because they did not seem to contain enough gas and dust to create the planets observed.

Dr John Ilee, a researcher at Leeds who was also involved in the study, added: “The disc-exoplanet mass discrepancy raises serious questions about how and when planets are formed. However, if other discs are hiding similar amounts of mass as HD 163296, then we may just have underestimated their masses until now.”

“We can measure disc masses by looking at how much light is given off by molecules like carbon monoxide. If the discs are sufficiently dense, then they can block the light given off by more common forms of carbon monoxide – and that could result in scientists underestimating the mass of the gas present.

“This study has used a technique to observe the much rarer 13C17O molecule – and that’s allowed us to peer deep inside the disc and find a previously hidden reservoir of gas.”

The researchers made use of one of the most sophisticated radio telescopes in the world – the Atacama Large Millimetre/submillimetre Array (ALMA) – high in the Atacama Desert.

ALMA is able to observe light that is invisible to the naked eye, allowing astronomers to view what is known as the ‘cold universe’ – those parts of space not visible using optical telescopes.

Booth said: “Our work shows the amazing contribution that ALMA is making to our understanding of the Universe. It is helping build a more accurate picture of the physics leading to the formation of new planets. This of course then helps us understand how the Solar System and Earth came to be.”

The researchers are already planning the next steps in their work.

Booth added: “We suspect that ALMA will allow us to observe this rare form of CO in many other discs. By doing that, we can more accurately measure their mass, and determine whether scientists have systematically been underestimating how much matter they contain.”