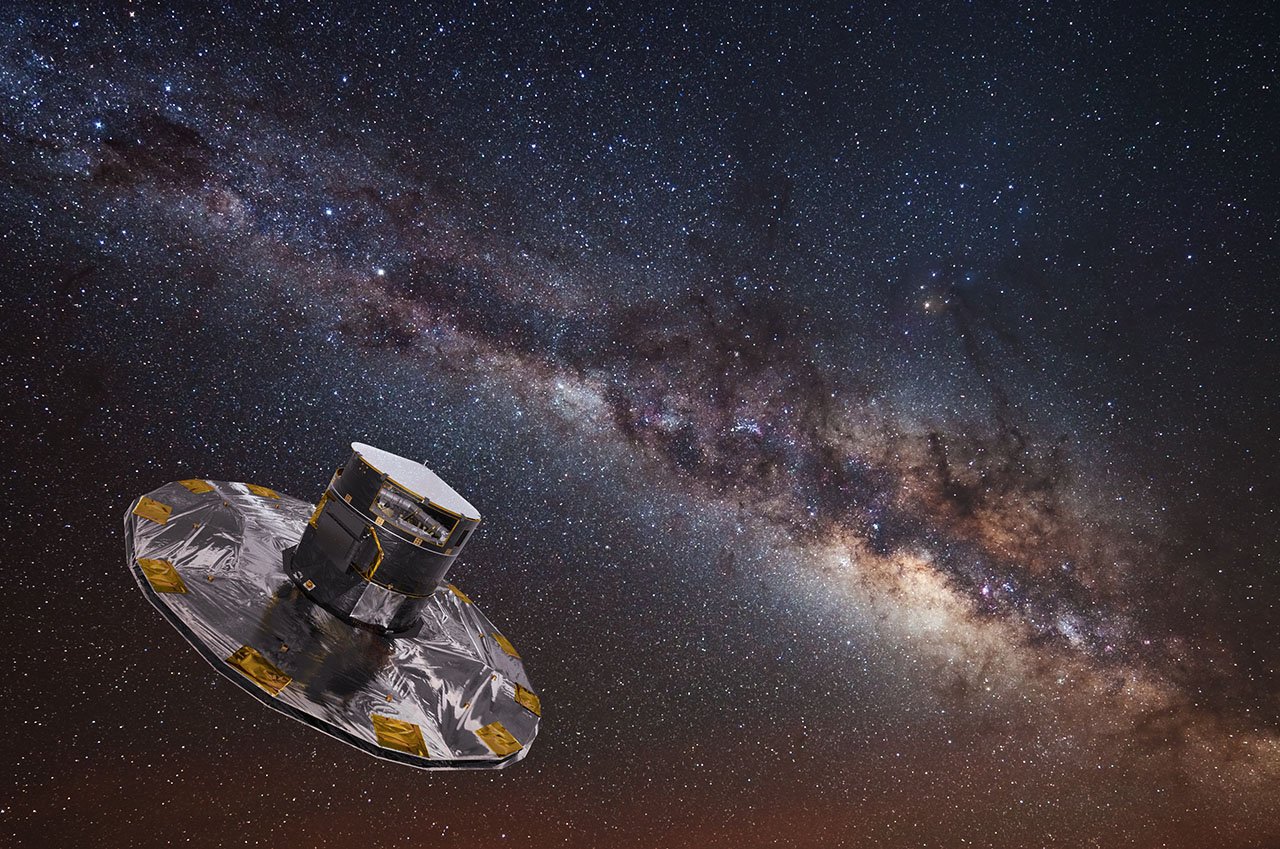 A team led by researchers of the Institute of Cosmos Sciences of the University of Barcelona (ICCUB, UB-IEEC) and the Besançon Astronomical Observatory have found, analysing data from the Gaia satellite, that a severe star formation burst occurred in the Milky Way about to and three thousand million years ago. In this process, more than 50 % of the stars that created the galactic disc may have been born. There results come from the combination of the distances, colors and magnitude of the stars that were measured by Gaia with models that predict their distribution in our Galaxy. The study has been published in the journal Astronomy & Astrophysics.

Just like a flame fades when there is no gas in the cylinder, the rhythm of the stellar formation in the Milky Way, fuelled by the gas that was deposited, should decrease slowly and in a continuous way until using up the existing gas. The results of the study show that, although this was the process that took place over the first 4,000 million years of the disc formation, a severe star formation burst, or “stellar baby boom” – as stated in the article published in the Nature Research Highlights –, inverted this trend. The merging with a satellite galaxy of the Milky Way, which is rich in gas, could have administrated new fuel and reactivate the process of stellar formation, in a similar way to when a gas cylinder is changed. This mechanism would explain the distribution of distances, ages and masses that are estimated from the data taken from the European Space Agency Gaia satellite.

“The time scale of this star formation burst together with the great amount of stellar mass involved in the process, thousands of millions of solar mass, suggests the disc of our Galaxy did not have a steady and paused evolution, it may have suffered an external perturbation that began about five billion years ago”, said Roger Mor, ICCUB researcher and first signer of the article.

“We have been able to find this out due having – for the first time – precise distances for more than three million stars in the solar environment”, says Roger Mor. “Thanks to these data – he continues – we could discover the mechanisms that controlled the evolution more than 8-10 billion years ago in the disc of our Galaxy, which is not more than the bright band we see in the sky on a dark night and with no light pollution”. Like in many research fields these days, these findings have been possible thanks to the availability of the combination of a great amount of unprecedented precision data, and the availability of a great amount of hours in computing in the computer facilities funded by the FP7 GENIUS European project (Gaia European Project for Improved data User Services) – in the Center for Scientific and Academic Services of Catalonia (CSUC).

Cosmologic models predict our galaxy would have been growing due the merging with other galaxies, a fact that has been stated by other studies using Gaia data. One of these merges could be the cause of the severe star formation burst that was detected in this study.
“Actually, the peak of star formation is so clear, unlike what we predicted before having data from Gaia, that we thought necessary to treat its interpretation together with experts on cosmological evolution of external galaxies”, notes Francesca Figuerars, lecturer at the Department of Quantum Physics and Astrophysics of the UB, ICCUB member and signer of the article.

According to the expert on simulations of galaxies similar to the Milky Way, Santi Roca-Fàbrega – from the Complutense University of Mardid and also signer of the article, “the obtained results match with what the current cosmological models predict, and what is more – he continues – our Galaxy seen from Gaia’s eyes is an excellent cosmological laboratory where we can test and confront models at a bigger scale in the universe”.

This study has been conducted with the second release of the Gaia mission, which was published a year ago, on April 25, 2018. Xavier Luri, director of ICCUB and also signer of the article states: “The role of scientists and engineers of the UB has been essential so that the scientific community enjoys the excellent quality of data from the Gaia release”.

More than 400 scientists and engineers from around Europe are part of the consortium in charge of preparing and validating these data. “Their collective work brought the international scientific community a release that is making us rethink many of the existent scenarios on the origins and evolution of our galaxy”, notes Luri.

In one year, more than 1,200 peer review articles published in journals show the before and after Gaia in almost all fields of astrophysics, from the recent detection of new stellar clusters, new asteroids, to the affirmation of the star extragalactic origin in our Galaxy, going through the calculus of the Milky Way mass and the findings that show compact stars end up slowly solidified.

“The satellite continues to operate optimally and this July the five nominal years of scientific operation will be completed”, notes Carme Jordi, UB researcher and member of the Gaia Science Team, the scientific advisor body of the European Space Agency (ESA) for this mission. ESA has approved of the extension of the mission until late 2020 – one more year than expected – and engineering teams estimate that there is enough fuel to continue working until 2024. “There is no doubt this mission has passed a technological unprecedented challenge in space missions of all time”, concludes Carme Jordi.