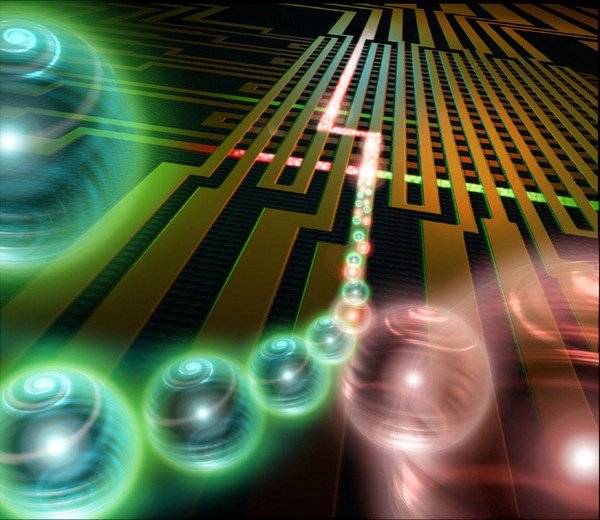 A new material could aid in the development of extremely energy efficient IT applications. The material was discovered by an international research team in cooperation with Martin Luther University Halle-Wittenberg (MLU). The electrons at the oxide interface of the material possess special properties which drastically increase the conversion rate of spin current to charge current. This is the foundation for future spintronic applications. The new material has been found to be more efficient than any previously investigated material, the team writes in the journal Nature Materials.

Electric current flows through all technical devices. Heat is generated and energy is lost. Spintronics explores new approaches to solving this issue that utilise a special property of electrons: spin. This is a type of intrinsic angular momentum of electrons that generates a magnetic torque and it is what causes magnetism. The idea behind spintronics is: If spin current flows through a material instead of an electrical charge, no heat is generated and significantly less energy is lost in the device.

“However, this approach still requires an electric current for the device to work. Therefore, an efficient spin-to-charge conversion is necessary for this novel technology to work,” explains Professor Ingrid Mertig, a physicist at MLU.

Her research group is part of the international research team that discovered the new material. The work was led by the French physicist Dr Manuel Bibes, who conducts research at the renowned institute Centre national de la recherche scientifique (CNRS) – Thales.

The group investigated the interface between two oxides.

“The two substances are actually insulators and are non-conductive. However, a kind of two-dimensional electron gas forms at their interface, which behaves like a metal, conducts current and can convert charge current into spin current with extremely high efficiency,” explains Mertig. Dr Annika Johansson and Börge Göbel, two members of her research group, provided the theoretical explanation for this unusual observation.

According to the researchers, the new material is significantly more efficient than any other known material. This could pave the way for the development of new, energy-saving computers.

MLU has extensive expertise in the field of oxide interfaces. Since 2008, Collaborative Research Centre 762 “Functionality of Oxidic Interfaces” has been located at MLU, which is funded by the Deutsche Forschungsgemeinschaft (German Research Foundation, DFG). The CRC is part of the university’s core research area “Materials Science – Nanostructured Materials”.

The idea for the project arose during Manuel Bibes’s guest stay in Halle last year. Bibes is a recipient of the Alexander von Humboldt Foundation’s Friedrich Wilhelm Bessel Research Award. The prize is awarded to internationally renowned scientists from abroad for their research achievements. Researchers can use the prize money for research stays at German universities and research institutions.