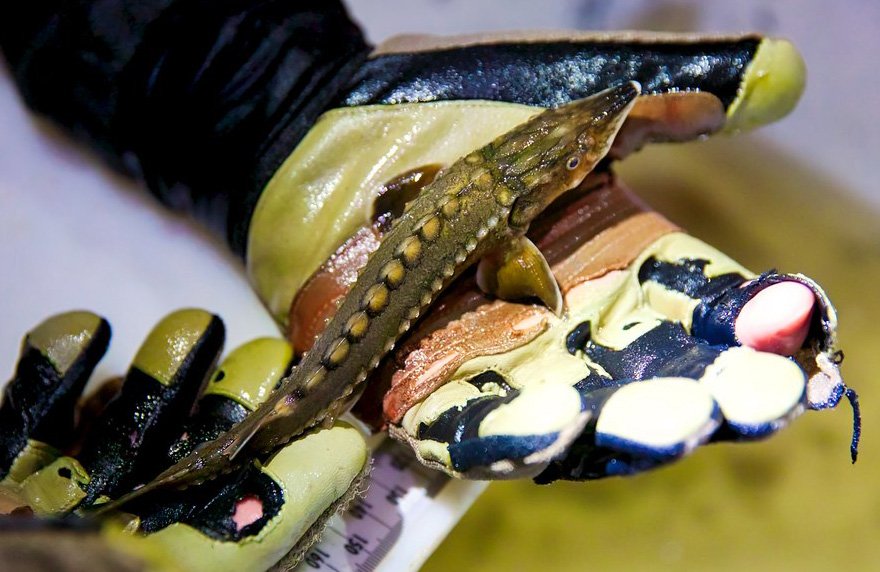 Cold water released from Lake Shasta into the Sacramento River to benefit endangered salmon can be detrimental to young green sturgeon, a threatened species adapted to warmer water. But scientists at UC Santa Cruz and the National Marine Fisheries Service have found a way to minimize this apparent conflict through a water management strategy that benefits both species, while also meeting the needs of agricultural water users downstream.

Releases of cold water during the spring and summer create favorable spawning conditions in the Sacramento River for the endangered winter-run chinook salmon, which were cut off from their historical spawning grounds at higher elevations by the construction of Shasta Dam. Salmon eggs require cold water temperatures to survive, but juvenile green sturgeon need the lower flows and warmer temperatures typical of the main stem of the Sacramento River to grow and thrive.

The researchers used statistical modeling to see if there is an optimal management scenario that can meet the needs of both species along with those of downstream water users. Their results, published August 20 in the Journal of Applied Ecology, show that dam releases can be managed to achieve all three objectives in all but the most severe drought years.

“It’s a win-win-win here in the sense that we’re not giving up anything to get an improvement for the green sturgeon,” said Eric Palkovacs, associate professor of ecology and evolutionary biology at UC Santa Cruz and senior author of the paper.

“Currently, the primary management objectives are keeping it cold for the salmon eggs and delivering enough water downstream. As a result, we’ve been refrigerating the river in regions where historically the green sturgeon have been spawning.”

First author Liam Zarri conducted the study for his UCSC master’s thesis, working with Palkovacs and coauthors Eric Danner and Miles Daniels at the National Marine Fisheries Service laboratory in Santa Cruz. Zarri found that discharge rates and water temperatures strongly influence the body condition of larval green sturgeon. In years with high discharges of cold water, egg survival for winter-run chinook salmon was high but the condition of juvenile green sturgeon was poor. In drought years, however, with low flows and warmer water, green sturgeon did well while salmon egg survival was low. The sturgeon larvae seem to be especially sensitive to high discharges, which affect their swimming ability and availability of prey.

The key to meeting the needs of both species, Zarri said, is that they spawn at slightly different times of the year. “We’re able to suggest a management scenario which uses the differential timing of spawning in these two species. When they overlap, our model gives us the ideal temperature and flow for when both species are present,” he said.

Zarri noted that the dam releases can draw either cold water from the bottom of the lake or warmer water from closer to the surface. Under the optimal management scenario proposed in the paper, low flows of warmer water can be released early in the season (April and May) when only green sturgeon are spawning and demand for water for agriculture has not yet ramped up. Late in the season (July to November), high flows of cold water can be released to benefit salmon and meet agricultural water needs.

The overlap period in June and early July, when both salmon and sturgeon are present in the part of the river most affected by the dam releases, is more complicated. That’s where the statistical modeling approach, which takes into account the needs of both species, provides the ideal conditions of temperature and water flow that dam managers can aim for to ensure that the river is not too warm for salmon or too cold and fast for sturgeon.

“Under the current management, there is quite a long period of cold water releases starting very early in the season before the chinook salmon have really started showing up in earnest. We’re saying that you can wait until the green sturgeon have matured and moved out of the system,” Palkovacs said. “That has a side benefit in drought years, when limiting those early releases saves water for later in the year when it’s more valuable, both for salmon and for downstream water demand.”

Palkovacs noted that other native species in the river, including spring and fall runs of salmon, are probably also being affected by the cold water releases. At this point, however, the researchers did not have enough information about other species to include them in their analysis.