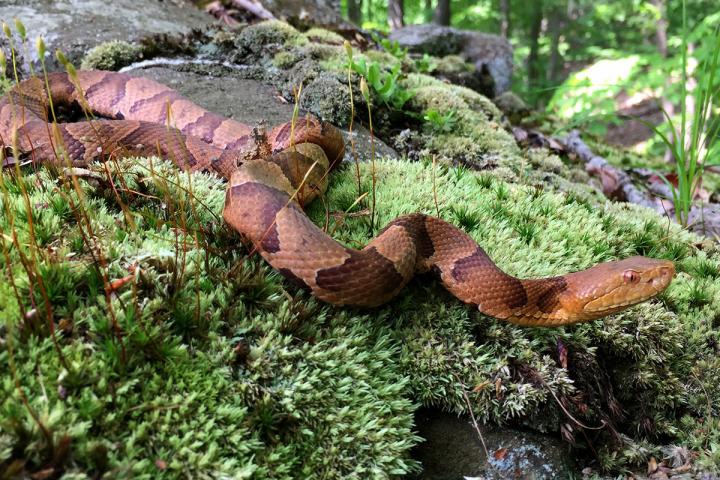 A long-term study of copperhead snakes in a forest near Meriden, Connecticut, revealed that five consecutive years of drought effectively ended the snakes’ reproductive output.

Not one of the dozens of female snakes in the closely monitored population became pregnant the year after the drought ended, researchers found. The year before that, only one female produced offspring. In the years preceding the drought, multiple snakes produced dozens of offspring.

The new findings appear in the journal Scientific Reports.

“Before this study, we knew surprisingly little about how drought directly affects reproduction in snakes,” said Mark A. Davis, a conservation biologist with the Illinois Natural History Survey at the University of Illinois.

As the drought wore on, several semipermanent wetlands – which normally fill with water during the fall and winter and gradually dry out in late summer – became completely dry, the team found.

Since snakes eat tadpoles, salamanders and other wetland-associated amphibians, among other things, the parched wetlands meant their prey were also drying up. Snake reproductive output depends on their ability to fatten themselves one year to produce young in the next, the researchers said.

Just before the multiyear drought began, another food source became available in great abundance: A massive brood of 17-year cicadas emerged. Copperheads are known to gorge on cicadas when the insects emerge. The following year, 2011, 20 females produced 148 young, the largest number recorded over the 10 years researchers collected data.

The team wanted to know whether copperheads would produce fewer offspring in response to the drought and dwindling food supplies, or if they would produce the same number of young, but of a smaller size, Davis said.

Regardless of the conditions, snakes that gave birth always produced about six offspring, and the newborn snakes were roughly the same size from year to year, the team found.

“This means that the snakes are deciding, ‘Do I have enough gas in the tank this year to produce offspring?'” Davis said. “And as the drought wore on, the answer was, increasingly, ‘No.'”

The researchers were confident they were capturing most or all of the pregnant females in the population over the years. The snakes return each year to the same hibernation and gestation sites, making it relatively easy to find them, Davis said.

In 2018, after a year of normal precipitation, copperhead reproduction rebounded. The researchers counted 100 offspring from 16 pregnant females. This group of pregnant females included individuals that had been captured and given birth in the past. The study revealed that, while copperheads are resilient, their ability to adapt to environmental change has limits, Davis said.

As climate change stresses the entire ecosystem, the snakes may run out of alternate food supplies like the cicadas, which also are disappearing from many landscapes, said study co-author Catherine Dana, a graduate student in entomology who specializes in cicada biology.

“This study shows that reproduction is complex,” Davis said. “A changing climate coupled with the loss of biodiversity may be placing even common species at higher risk of declines in the short term and, perhaps, extinctions in the long term. This will only serve to erode those ecosystem services – the benefits we receive from nature – that these animals provide.”