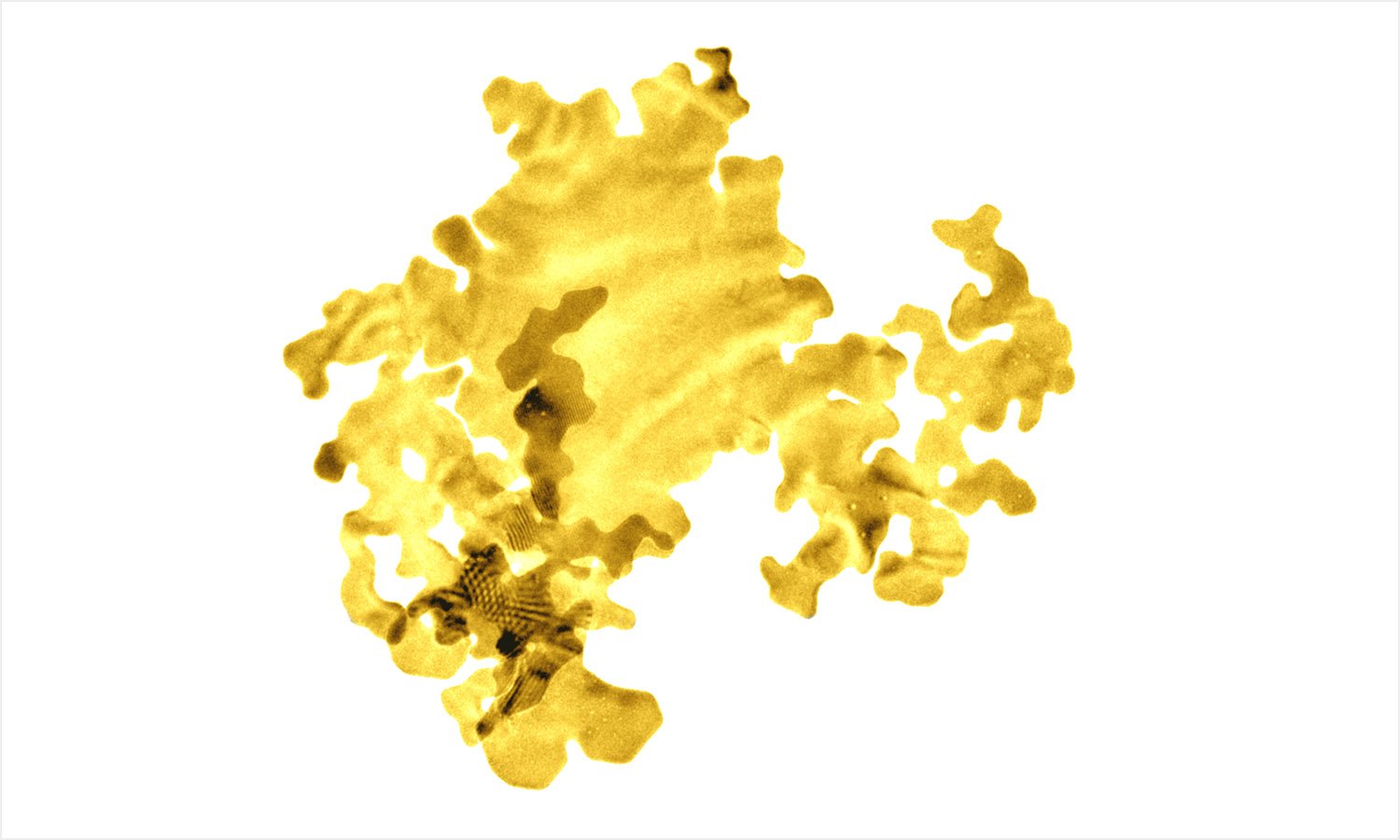 The researchers measured the thickness of the gold to be 0.47 nanometres – that is one million times thinner than a human finger nail. The material is regarded as 2D because it comprises just two layers of atoms sitting on top of one another. All atoms are surface atoms – there are no ‘bulk’ atoms hidden beneath the surface.

The material could have wide-scale applications in the medical device and electronics industries – and also as a catalyst to speed up chemical reactions in a range of industrial processes.

Laboratory tests show that the ultra-thin gold is 10 times more efficient as a catalytic substrate than the currently used gold nanoparticles, which are 3D materials with the majority of atoms residing in the bulk rather than at the surface.

Scientists believe the new material could also form the basis of artificial enzymes that could be applied in rapid, point-of-care medical diagnostic tests and in water purification systems.

The announcement that the ultra-thin metal had been successfully synthesised was made in the journal Advanced Science.

The lead author of the paper, Dr Sunjie Ye, from Leeds’ Molecular and Nanoscale Physics Group and the Leeds Institute of Medical Research, said: “This work amounts to a landmark achievement.

“Not only does it open up the possibility that gold can be used more efficiently in existing technologies, it is providing a route which would allow material scientists to develop other 2D metals.

“This method could innovate nanomaterial manufacturing.”

The research team are looking to work with industry on ways of scaling-up the process.

Synthesising the gold nanosheet takes place in an aqueous solution and starts with chloroauric acid, an inorganic substance that contains gold. It is reduced to its metallic form in the presence of a ‘confinement agent’ – a chemical that encourages the gold to form as a sheet, just two atoms thick.

Because of the gold’s nanoscale dimensions, it appears green in water – and given its shape, the researchers describe it as gold nanoseaweed.

Professor Stephen Evans, head of the Leeds’ Molecular and Nanoscale Research Group who supervised the research, said the considerable gains that could be achieved from using these ultra-thin gold sheets are down to their high surface-area to volume ratio.

He said: “Gold is a highly effective catalyst. Because the nanosheets are so thin, just about every gold atom plays a part in the catalysis. It means the process is highly efficient.”

Professor Evans said: “Our data suggests that industry could get the same effect from using a smaller amount of gold, and this has economic advantages when you are talking about a precious metal.”

The flakes are also flexible, meaning they could form the basis of electronic components for bendable screens, electronic inks and transparent conducting displays.

Professor Evans thinks there will inevitably be comparisons made between the 2D gold and the very first 2D material ever created – graphene, which was fabricated at the University of Manchester in 2004.

He said: “The translation of any new material into working products can take a long time and you can’t force it to do everything you might like to. With graphene, people have thought that it could be good for electronics or for transparent coatings – or as carbon nanotubes that could make an elevator to take us into space because of its super strength.

“I think with 2D gold we have got some very definite ideas about where it could be used, particularly in catalytic reactions and enzymatic reactions. We know it will be more effective than existing technologies – so we have something that we believe people will be interested in developing with us.”