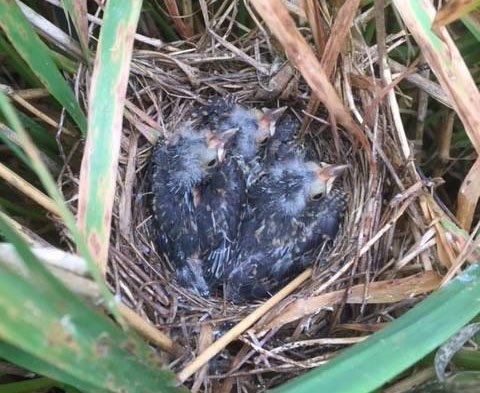 If you’re a predator that eats baby birds – say, an American Crow – eavesdropping on the begging calls of nestlings can be an easy way to find your next meal. But do baby birds change their begging behavior when predators are nearby to avoid being detected and eaten? Very few studies have investigated whether nestlings react to the sounds of predators, but new research published in The Auk: Ornithological Advances shows that when their parents are away, baby Red-winged Blackbirds beg less often and stop begging sooner if they hear recordings of predators’ calls.

Beloit College’s Ken Yasukawa and his students used recordings of both crows and Cooper’s Hawks to test the reactions of blackbird nestlings when one or both of their parents were nearby and when both parents were absent. When neither parent was around, nestlings who heard the calls of either predator adjusted their begging behavior to attract less attention. When a parent returned, however, nestlings begged noisily whether the researchers played predator recordings or not. Getting the food their parents had brought (and being noisier than their siblings in order to do so) was important enough that it outweighed the potential danger from predators.

Nest predation is so common that the researchers had trouble locating enough surviving nests to collect their data. “We spent a lot of time and effort searching for nests and then checking them daily, only to have more than half fail before the nestlings were old enough to be experimental subjects. Quite often we would go to a nest expecting to do a playback experiment, only to find that it no longer contained nestlings,” says Yasukawa. “We even had one case of snake predation during our playback. We know because we had a video recording of the snake removing the nestling!”

One surprise in the study’s results was that nestlings reacted to the call of Cooper’s Hawks as well as crows, even though hawks are not typically nest predators, preying on adult birds instead. The researchers suspect that adaptations to avoid Cooper’s Hawks predation have been so strongly favored by natural selection that they’re expressed at all ages.

Human activity can alter habitats in ways that make predators more common and make it easier to find nests, so deciphering the interactions between nestlings and predators can be crucial for planning conservation efforts.

“Understanding this complex system is important, because human activity has been causing bird populations to decline,” says Yasukawa. “Even the very common Red-winged Blackbird has been affected by habitat conversion and destruction, as well as increases in rates of predation.”