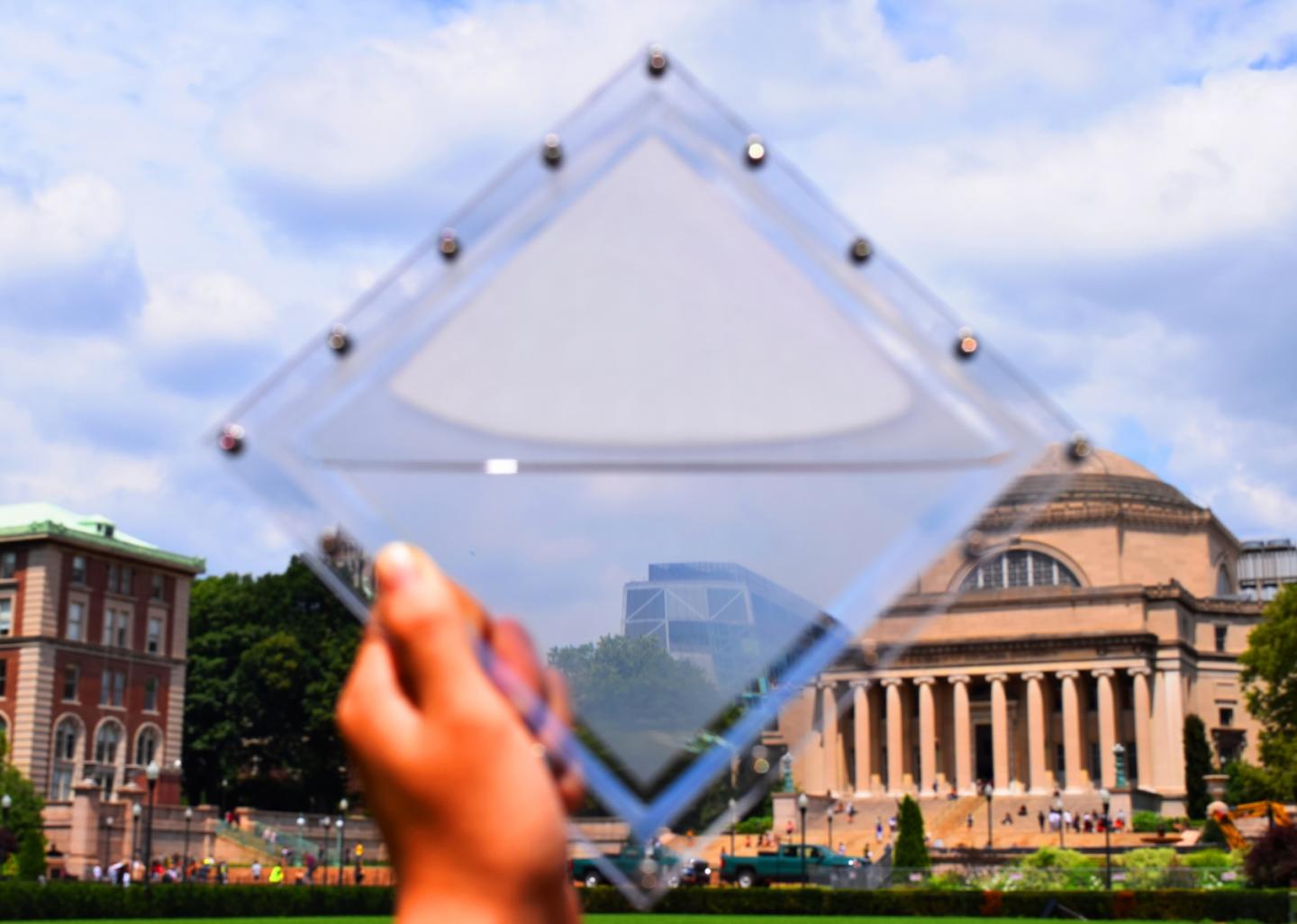 Buildings devote more than 30% of their energy use to heating, cooling, and lighting systems. Passive designs such as cool roof paints have gone a long way toward reducing this usage, and its impact on the environment and climate, but they have one key limitation–they are usually static, and thus not responsive to daily or seasonal changes.

Columbia Engineering researchers have developed porous polymer coatings (PPCs) that enable inexpensive and scalable ways to control light and heat in buildings. They took advantage of the optical switchability of PPCs in the solar wavelengths to regulate solar heating and daylighting, and extended the concept to thermal infrared wavelengths to modulate heat radiated by objects. Their work is published on October 21, 2019 by Joule.

“Our work shows that by wetting PPCs with common liquids like alcohols or water, we can reversibly switch their optical transmittance in the solar and thermal wavelengths,” says Jyotirmoy Mandal, lead author of the study and a former PhD student in the lab of Yuan Yang, assistant professor of materials science and engineering. “By putting such PPCs in hollow plastic or glass panels, we can make building envelopes that can regulate indoor temperatures and light.”

The team’s design is similar to smart windows, but with a higher optical switchability, and is built using simpler, inexpensive materials that could make it implementable at large scales. It builds upon earlier work that demonstrated a paint-like fluoropolymer coating with nano-to-microscale air voids that can cool down buildings. That coating was static, however. “In places like New York, which sees warm summers and harsh winters, designs that can switch between heating and cooling modes can be more useful,” says Yang.

The team began their work on optically switching PPCs serendipitously, when Mandal noticed that a few drops of alcohol spilled on a white fluoropolymer PPC turned it transparent.

“What we saw was the same mechanism that causes paper to turn translucent when wetted, but at a near-optimal level,” says Mandal. “The physics of this has been previously explored, but the drastic switching we saw led us to explore this particular case, and how it can be used.”

Because of the near-perfect refractive-index matching of alcohols and the fluoropolymer, the team could change the solar transmittance of their PPCs by ~74%; for the visible part of sunlight, the change was ~80%. Although the switching is slower than in typical smart windows, the transmittance changes are considerably higher, making PPCs attractive for controlling daylight in buildings.

The researchers also investigated how optical switching could be used for thermoregulation.

“We imagined roofs that are white during the summer to keep buildings cool, and turn black during the winter to heat them,” says Yang, “This can greatly reduce air-conditioning and heating costs of buildings”.

To test their idea, the researchers put panels containing PPCs on toy houses with black roofs. One panel was dry and reflective, while the other was wet and translucent, showing the black roof underneath. Under sunlight on a summer noon, the white roof became cooler than the ambient air by ~3?C/5?F, while the black one became much hotter, by ~21?C/38?F.

The team also explored switching in the thermal infrared wavelengths, and observed a novel switching between “icehouse” to “greenhouse” states by wetting infrared-transparent polyethylene PPCs. When dry, the porous polyethylene PPCs reflect sunlight but transmit radiated heat, behaving like an “icehouse”. Wetting the PPCs makes them transmit sunlight, and, because typical liquids absorb thermal wavelengths, block radiated heat, like a greenhouse. Because they modulate both solar and thermal radiation, they can regulate heat during both day and night.

“Although obtained simply, the transition is quite unusual compared to switching in other optical systems, and is perhaps the first time it has been reported,” says Mandal.

Yang’s team also tested other potential applications, such as thermal camouflage and paints that respond to rain. The latter could be used to cool or heat buildings in Mediterranean climate zones and the Californian coast, which see dry summers and rainy winters. The researchers are now looking at ways to scale up their designs, and explore opportunities to deploy and test them at large scales.

“Given the scalability and performance of the PPC-based designs, we are hopeful that their applications will be wide-spread,” says Yang, “in particular, we are excited by their potential applications on building facades”.

Mandal, who is now doing postdoctoral research as a Schmidt Science Fellow at the University of California, Los Angeles, adds, “We deliberately chose commonly available polymers and simple designs for our work. The goal is to make them locally manufacturable and implementable in developing countries, where they would have the greatest impact.”